Many Misunderstand the Concept of Tolerance 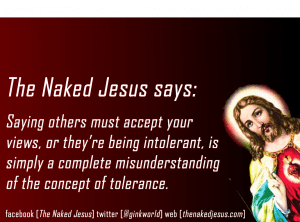 Let’s start out with a simple understanding of three important verbs, and how they relate to each other; Tolerate, Accept, and Want.

Tolerate: To allow.
Accept: To consent to receive.
Want: To have a desire to possess.

As I’m sure we can all see, there are some big differences between those three verbs. They are, if you will, part of a continuum of ideas, but they’re also, somewhat, mutually exclusive of each other. Let me try to connect how these three verbs work together, and yet stand independently from each other:

Let’s say, you have an idea. You voice your idea to the world, and some disagree with you, and reject your idea. When that happens, you make the statement, ‘If you disagree with me, you’re not being very tolerant to my idea.’

If you say something crazy, insulting, hurtful, or questionable, we can tolerate your idea [and should, because you can say what you desire], but, tolerating your idea does not require anyone to accept what you say, and everyone has the right to not want that statement in their spirit [which gives others the right to not accept, or want, the statement]. Tolerance simply means you can express your idea, and others have the right to reply, and even reject your idea, and speak against it. No one is trying to stop you from thinking, or saying, what you desire; in that, you cannot require others to accept, or want, your idea.

Many falsely believe that if others don’t accept, or want, an idea, they’re being intolerant. If you say somethings others disagree with, they can speak out against it [not accept it], or not desire to possess [want] the idea at any level. Just as you have the right to express your ideas, others have the right to say your idea is wrong, hurtful, insulting, questionable, and even crazy.

Saying others must accept your views, or they’re being intolerant, is simply a complete misunderstanding of the concept of tolerance. 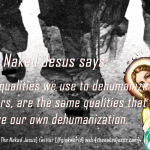 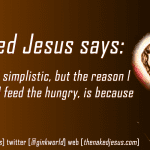 Snake-handling is unwise, but at least...
slacktivist
Related posts from The Naked Jesus