How does a lapsed Catholic and scientifically literate scion of an immigrant family become not only the chief truth-teller for the Trump administration, but also the trusted advisor of six presidents and the ground-breaking public health official who consistently sees and engages the social truths of each new crisis?

Like anything in life, the answer is complicated. But one thread that keeps coming up is the moral and critical training Fauci received as the student of Jesuits in both high school and college.

All four of Anthony Fauci’s grandparents were immigrants, three directly from Italy. His parents met and married, and settled in Bensonhurst, Brooklyn, where Fauci was raised. Fauci’s family ran a neighborhood drugstore, which in those days was often the “first line” of defense against against illness. Every member of the family was involved, and Fauci recalls delivering prescriptions from the time he was old enough to ride a bike.

Like so many first-generation immigrants, Fauci’s parents worked hard to make a better life for their children. They were able to send him to Regis High School on Manhattan’s Upper East Side, and Fauci regularly remembers in interviews how the commute involved a bus and three subways during rush hour in each direction. In a 1989 interview, Fauci said:

I credit very much the Jesuit training in precision of thought and economy of expression in solving and expressing a problem and in the presentation of a solution in a very succinct, accurate way. This has had a major, positive influence on the fact that I enjoy very much and am fairly good at being able to communicate scientific principles or principles of basic and clinical research without getting very profuse and off on tangents.

As Fauci explains, the Jesuit order, “is driven by intellectual curiosity—rigorous academic pursuits, openness and honesty without having any intellectual constraints put on you.” He describes this training as “just absolutely the core of how I conduct myself.” and recalls being impressed “with Jesuit teaching on the value of service to others.”

Who Are the Jesuits?

The Jesuits, or Society of Jesus, is a Catholic order of priests famed for their embrace of research and knowledge. From many of the world’s premier colleges and universities to Pope Francis, who holds a degree in chemistry, Jesuits live by their founder Ignatius Loyola’s exhortation to “find God in all things.”

Fauci describes himself as “not a regular church attender,” but instead a “humanist” who has “faith in the goodness of mankind.” Despite leaving behind the overtly religious trappings of his childhood, though, Fauci’s worldview and approach to science still echoes fairly closely that of his Jesuit teachers. His observation, for example, that “science, in its purest sense, is exploring the unknown, and whenever you explore the unknown, there’s a chance you’re going to find something that’s completely unexpected” echoes that of Jesuit brother and Vatican astronomer Guy Consolmagno, “doing science is like playing a game with God, playing a puzzle with God.”

In a recent interview with the Catholic Courier, “Fauci said he navigated through six presidential administrations in Washington by being decidedly apolitical and nonideological.” Fauci also told Politico, “you don’t want to go to war with a president, but you got to walk the fine balance of making sure you continue to tell the truth.” In fact, Fauci has regularly been recognized throughout his career for doing exactly that. The current president of Fauci’s old high school, Jesuit Father Daniel Lahart, says, “I take great comfort in knowing that when he speaks that he is speaking the truth and nothing but the truth.”

The Truth on Social and Racial Justice

Looking back on Fauci’s handling of the AIDS epidemic, for which he now receives widespread acclaim, it is easy to forget that Fauci’s work and public positions were controversial, and that he took heat from both sides. Fauci’s immersion in and engagement of the gay community was groundbreaking in the public health world, and led to him being a sort of outcast in the government he worked for, but at the same time, his cautious, evidence-centered approach was too little and too slow for many activist voices. In the end, Fauci managed to both break down the stigma around AIDS and homosexuality and get the best treatments to the people who needed them as quickly as good science allowed.

Fauci continued these stigma-busting efforts throughout his career, famously hugging recovered Ebola patient and nurse Nina Pham to show it was safe.  Today, Fauci is working to bring attention to racial disparities in COVID-19 outcomes.

Fauci might not be much of a churchgoer anymore, but the Jesuit ethic that was instilled in him so long ago is still demonstrably and admittedly at work. As Christians, we are “justified by works and not by faith alone” (Ja. 2:24), we are called to “speak the truth in love” (Ep. 4:15), and we are held accountable for our treatment of “the least of these” (Mt. 25:40). Fauci’s grace, humility, social engagement, and rigid adherence to the truth has made him a rare commodity in a government increasingly populated by partisan ideologues. And literal lives are saved. This is the work Jesus and the Jesuits call us all to do.

Edited April 11, 2020 to reflect that Guy Consolmagno is a Jesuit brother and not a Jesuit priest. 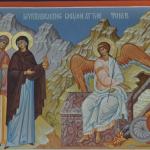 Hospitality in Zarephath
slacktivist
Related posts from The New Paraclete