Activism and Bereavement: a Reflection on Healing

Activism and Bereavement: a Reflection on Healing May 23, 2020 Jim Coppoc

By the rivers of Babylon—
there we sat down and there we wept
when we remembered Zion.
-Psalm 137:1 NRSV

The first time I really engaged the 137th Psalm, I was a sophomore in boarding school. My choir sang a gorgeous setting of Don McLean’s “By the Waters of Babylon,” and something about the deep, unabashed lament stuck with me. Then I looked up the original text McLean drew from and found a couple verses later, How can we sing the LORD’s song in a foreign land?

That year I was expelled from that school and returned to an unhappy home. I bought Don McLean’s album, and used his rendering as part of my lament—my grief process. I learned to play it on guitar. It helped me heal. It helped me deal with the loss of the good world I knew. Two more high schools later, I graduated early, left home, and never looked back. But this was still a formative experience.

The DSM 5—the gold standard for psychological diagnosis in the United States—treats bereavement differently from all the editions that came before. While bereavement can be a triggering factor for a mood disorder, or even a disorder of its own, it does not have to be. In fact, diagnosticians are encouraged at every turn to take into account “cultural norms for the expression of distress in the context of loss,” and the manual advises “grief responses may manifest in specific ways.”  To express grief publicly or privately is not necessarily dysfunction. And dealing with grief in personally and culturally healing ways can in fact be a major step in preventing or treating actual mental illness.

Perhaps one of the most surprising manifestations of this healing process I have come across as I’ve learned about bereavement is activism as a coping mechanism. Social scientist Jon Shute, in his work with victims of violent crime, has found, among other things, value in “the strength and purpose that can be gained from collective defiance.” Famous American examples of this range from the activism exhibited by the student survivors of the school shooting at Marjory Stoneman Douglas High School to the strength of the mother of murder victim Emmett Till in showing his mutilated body to the world.

These actions are both activism and public lament, at the same time, working to heal both the survivors of these horrific events and the world they inhabit. Not only is this a valid step in the grief process from the perspective of both psychology and social science, but also I believe it is the theological answer to the Psalmist’s question.

How can we sing the LORD’s song after trauma so deep it touches our very soul?

Sing it anyway. Reach out. Engage. Let all of Babylon hear your lament, and be moved by its power.

About Jim Coppoc
Jim Coppoc is a seminarian studying to be a chaplain who works in mental health. You can read more about the author here.
Previous Post 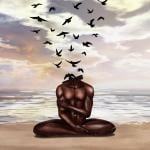 May 23, 2020
Mental and Spiritual Health in the Age of Pandemic
Next Post

May 29, 2020 The Theology of Riot
Recent Comments
0 | Leave a Comment
Browse Our Archives
get the latest from
The New Paraclete
Sign up for our newsletter
POPULAR AT PATHEOS Progressive Christian
1