Why Not Call a Lynching a Lynching?   May 9, 2020 Jim Coppoc

Deliver me, O LORD
from lying lips,
from a deceitful tongue

About twenty years ago, I took a year-long statistics and experimental design course that changed how I viewed truth forever. The instructor not only showed us through real-world examples how the same set of data could lead to multiple conflicting conclusions, but also how the way we frame questions—the words we use—can change a respondent’s answer completely. A lot more people, for example, would choose to terminate a “pregnancy” than terminate a “fetus,” even though they describe the exact same action.

On February 23, 2020, Ahmaud Arbery, who is black, was jogging through a suburban neighborhood in Georgia. Two white men, Gregory McMichael and his son Travis, chased Arbery down in a pickup truck and confronted him with loaded weapons. There was a struggle. Travis McMichael shot Ahmaud Arbery dead. Almost no media outlet has called this act what it is.

Now, the man who recorded the video implicating the McMichaels has lost his job and is receiving death threats for his actions, and a Facebook group demanding “Justice for Gregory and Travis McMichael” has gained, at the time of this writing, more than 100,000 members. Among other things, this group offers prayer for the two “God fearing” men.

While technical definitions of “lynching” vary from place to place, they all share the same common elements. A group of people kills someone without a trial because they suspect that person of a crime. Generally, the “suspicion” is pretextual. Frequently, there are racial overtones.

Is this how we want “Christians” to be defined in the 21st century?

Over and over in the Christian Bible—from the Ten Commandments to the Pauline epistles—we are reminded that lying is a sin. That it separates us from God’s will. That we have a higher calling that cannot suffer dishonesty. I think, in particular, of the words of Solomon:

The words of the wicked lie in wait for blood,
but the speech of the upright rescues them (Pr. 12:6).

Whoever conceals hatred with lying lips
and spreads slander is a fool (Pr. 10:18).

An honest witness does not deceive,
but a false witness pours out lies (Pr. 14:5).

There is no sin more final than the unjust taking of another human’s life. And those who spin these acts of racial violence into something softer by refusing to use words like “lynching” are complicit.

Although it is not a complete accounting by any means, in 2018 the FBI reported 7,036 single-bias hate crimes.  The majority, 59.6%, were motivated by race, ethnicity or ancestry bias. The rest were a blend of religion, sexual orientation, gender identity, disability and gender. While crimes against property declined, violent hate crimes hit a 16-year high.  Unarmed black men, in particular, are in the news almost constantly for being gunned down by police, ex-police, neighborhood watch and so on. And over and over again, we hear the same pretextual suspicions that these innocent men might have been up to no good.

About Jim Coppoc
Jim Coppoc is a seminarian at United Theological Seminary of the Twin Cities, and the award-winning author of three books and two chapbooks of poetry; four good plays; a forgettable textbook; and a host of articles, essays, short prose, etc. He was among the founding faculty of the low-residency MFA program at Chatham University, and he taught writing, literature and American Indian Studies for many years at Iowa State University. Jim has collaborated with groups from the National Endowment for the Arts to the Iowa and Wyoming Arts Councils to prisons, preschools, churches, bars and everything between. He currently lives in Ames, Iowa with two amazing sons and the best dog ever, and he is hard at work on a novel about angels, demons, boarding school, and what it means to be blood You can read more about the author here.
Previous Post 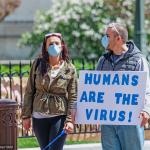 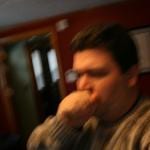 May 16, 2020 Your Feelings Don't Change the Virus. Wash Your Hands.
Recent Comments
0 | Leave a Comment
Browse Our Archives
get the latest from
The New Paraclete
Sign up for our newsletter
POPULAR AT PATHEOS Progressive Christian
1

What is a Christian Response to...
FreedHearts
Related posts from The New Paraclete

School-boards, mission boards, and the SBC
The new Southern Baptist president, Ed Litton, is a "moderate" only in...
view all Progressive Christian blogs
What Are Your Thoughts?leave a comment
Copyright 2008-2021, Patheos. All rights reserved.