Do All Dogs Go to Heaven?

In the 1989 animated film, All Dogs Go to Heaven, the age old question is answered by a whippet angel who explains that because the essential character of any dog is good and loyal, then of course all dogs go to Heaven. Until very recently this explanation was good enough for me. But last week a friend of mine asked me—as a seminarian and budding chaplain—if it was true. A young person close to her had lost a family pet, and she was looking for some words of reassurance. I had never formally considered the question before. All I could honestly say at the time was, “I have no idea.” The column below is what I wish I would have said instead.

Although the Hebrew Bible (the Christian “Old Testament”) makes vague mentions of an afterlife in Sheol, or Hades, from Genesis on, the first descriptions of a modern, resurrectionist, gatekeeping Heaven for the righteous come from a much later war, in the apocalyptic Book of Daniel.
The book of Daniel is a consolation and encouragement for Jews facing persecution under the Hellenistic (Greek) King Antiochus IV Epiphanes. The last five chapters deal with deliverance, and the last chapter in particular says this about “the time of the end” (v. 11:40, NRSV):

Many of those who sleep in the dust of the earth shall awake, some to everlasting life, and some to shame and everlasting contempt. Those who are wise shall shine like the brightness of the sky, and those those who lead many to righteousness, like the stars forever and ever (vv. 12:2-3).

Borrowing at once from the Greek tradition and the many near-Eastern cultures Daniel must have come into contact with, he was essentially promising those about to die in the Maccabean Revolt that if they did so righteously, they would would be raised up out of Sheol and into glory at the end of time.

For those Christians who believe that eternal salvation begins and ends with Christ, this might seem surprising. The Maccabean revolt was 167-160 BCE, or several generations before Christ’s birth, and Daniel is explicitly promising salvation. This would also have been surprising to other Jews of the time, as this was a significant departure from the beliefs they had always held. This looked a lot more like the structured, hierarchical, active afterlife of their Greek oppressors than the eternal rest among their ancestors that Jews had always known.

It is clear from any comprehensive read of relevant scripture that Heaven, and how to get there, is a complicated issue. In fact the Christian argument over Heaven is almost as old as the church itself, with church father Justin Martyr arguing in 2nd century that salvation comes by righteous acts, Tertullian and others arguing Christ continues to evangelize sinners even after death, Augustine of Hippo basing salvation on belief, and so on. The Catholic Church currently sets different standards for those who have or haven’t heard the Gospel, and many Protestants offer special prayers for those who haven’t to be offered mercy in the afterlife.

What Does This Have to Do with Dogs?
The facts that there is no settled “Christian” view on what and where Heaven is, let alone what the human experience will be there means that ancillary questions, like the matter of dogs, are equally arguable. The Book of Revelation sets dogs outside the gates of Heaven with the unrighteous (v. 22:15), but that passage can easily be read as referring to the ritually unclean (cf. v. 21:27). Elsewhere in prophesy, the wolf lies down with the lamb in the new kingdom (Is. 65:25), which shows at least some members of the canine family will be let in. As humans are given dominion over animals from Genesis forward, theologians like C.S. Lewis argue that at least tame animals ought to have a path to Heaven alongside their masters.

So Do Dogs Go to Heaven?

It is impossible to say with any certainty whether anyone—human or canine—will pass the pearly gates, or even if the pearly gates exist. Those are questions that may be fun to argue in the abstract, but ultimately the Christian focus needs to be on the here and now (Mt. 6:34). To the extent that righteousness matters, surely no animal is more noble or faithful than the domesticated dog. To the extent grace matters, it is difficult to imagine Christ excluding these exemplars of unconditional love.
In the end, I still don’t really know, but the logic of the Whippet Angel is sound. And it is clear throughout all of scripture that with regard to who does and doesn’t make the Heavenly cut, “for God, all things are possible” (Mt. 19:26).

About Jim Coppoc
You can read more about the author here.
Previous Post 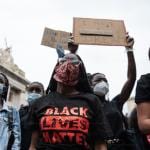 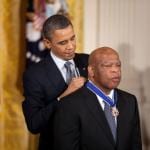 July 18, 2020 John Lewis, and the Theology of #GoodTrouble
Recent Comments
0 | Leave a Comment
Browse Our Archives
get the latest from
The New Paraclete
Sign up for our newsletter
POPULAR AT PATHEOS Progressive Christian
1

Revisiting Highway 61: All you know...
slacktivist
Related posts from The New Paraclete