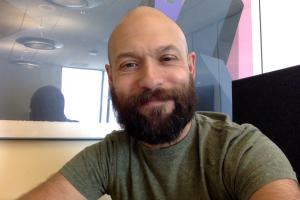 Born and raised on the South Side of Chicago in a devout Roman Catholic home, I attended Catholic Grade School, High School and University. After graduating from the University of Notre Dame in 1997 with a BA in German I moved to Germany. I attended the Katholische Universität in Eichstätt for several years, living large but studying little. Returning to the states in 2002, I worked for my family’s business and discovered a love for ballroom dancing. After competing for five years in the Chicago-land area and teaching dance for two years in the Chicago Public School district I eventually joined the United States Army in 2008.

At the age of 34 I had a dramatic vision of Jesus Christ when I stepped foot in my first Evangelical church. That was the day of my conversion and the start of my new life. After a deployment to Afghanistan in 2012, I eventually ended my service in December of 2013. While in Afghanistan I had picked up Lee Strobel’s The Case for Christ from one of the chapel libraries on Bagram Airfield. It was there that my love of Christian apologetics began. In 2014 my family and I moved from Fort Bragg, NC to La Mirada, CA, where I renewed my studies at Biola University, Talbot School of Theology.

I graduated in 2016 with an MA in Apologetics and in 2018 with an MA in Theology, winning the Baker Book Award for Excellence In Theology. I have published articles in academic journals such as Luther Rice Journal of Christian Studies and the Journal of Christian Legal Thought. In addition, I co-contributed two chapters to Evidence that Demands a Verdict, edited by Josh and Sean McDowell and have published articles for magazines such as Touchstone and online news sites like The Christian Post. Currently, I live in Orange County, CA with my three children.

I am committed to a historical Protestant worldview that holds the Scriptures to be revelatory and sufficient for salvation and sanctification. At the same time, I strive for unity among the traditional Christian confessions and actively seek ecumenical engagement and cooperation in all matters of faith and practice.