When Being “Pro Life” Is No Longer a Theoretical Position

The following post is written by my brother in law and friend, Dr. Benjamin Foreman. “Benj” lives and teaches in Israel. He’s married to Ya’el and together they (now) have four children.

I’m just about as pro-life as they come. But I have to admit something: it’s easy to be an arm-chair supporter of life. When you’re sitting on your couch watching your three perfectly healthy kids wrestle on your living room carpet––who doesn’t cheer for the unborn baby? But when things don’t develop exactly the way that What to Expect When You’re Expecting says they will, the choice between life and death is actually not always an easy one to make, even for a Christian. I know, because my wife and I had to make that choice several months ago.

Almost from the beginning my wife’s fourth pregnancy had complications. Very early on she had some pretty heavy bleeding, which the doctors believed was the result of the placenta being low in the uterus. At week 22 of the pregnancy my wife went to visit her OB, and since she had experienced some bleeding earlier on, the doctor sent her to the room next door for an ultrasound, just to be on the safe side. I still remember the ultrasound technician quickly getting up to call the OB. When they both came back into the room she said to the doctor, “I don’t see any water, any kidneys, or any bladder.”

As we were getting ready to rush off to the ER, my wife’s gynecologist said, “Listen, this is really bad news. There is no hope for this baby. It doesn’t appear to have any kidneys or bladder, and without amniotic fluid, the lungs can’t develop, and without lungs you can’t live. Now, you are at week 22 of the pregnancy, and here in Israel a woman can terminate the pregnancy up to the 24th week without the approval of a special committee. So you guys are standing in front of some very important decisions that need to be made very quickly.”

After basically not sleeping all night at the hospital, we went in for another ultrasound in the morning, and this time it was performed by a doctor that specializes in reading and performing ultrasounds. Her diagnosis was different: she did find the bladder, and the kidney, and all the other organs. But that didn’t mean everything was OK: there definitely was no amniotic fluid at all. And that is not good. The amniotic fluid is what helps the lungs and other organs to develop.

After a number of other tests we came to realize that my wife’s water had broken a week before––week 21 of the pregnancy. Now, a full pregnancy lasts about 40 weeks, which means that this baby––if we were to keep it––would have to live and continue to develop for nearly half of the pregnancy without any amniotic fluid.

“That,” the doctor said, “can cause major problems for the baby. If the baby were to even survive, the child would most likely have severe respiratory problems and could be on a respirator for her entire life. Frequently, babies in these situations develop bleeding in their brain––which can cause brain damage––and a whole number of other complications in the baby’s organs can arise. Also, being in the womb with no water causes the baby to be cramped and so the baby’s limps can be severely deformed.”

“And then there is the risk to the mother,” he continued. “Mothers carrying a baby with no water run a very high risk of infection. This can be very dangerous for the baby and for the mother as well. Some infections can be fatal for the mother.”

So that was the prognosis. All of the doctors were telling us that there is no hope for this baby and that everybody in our situation terminates the pregnancy. “In fact,” the doctor said, “I don’t even have any statistics to give you because nobody who is in your situation continues on with the pregnancy.”

Now, when a professor of Obstetrics advises you to terminate the pregnancy because the failure to do so could result in the death of your baby, possibly the death of your wife, or at the very least the birth of an extremely sick and severely disabled child, the choice between life and death is not an easy one to make.

It’s at this moment when your “pro life” ceases to be a theoretical (or political) position.

After several days of crying out to God and honestly asking him to clearly show us what we should do, we decided to continue on with the pregnancy and (probably for the first time in my life) depend totally on him for the future. We resolved that no matter how this child would turn out, we would love her just the way God made her.

It’s too bad I don’t have enough space here to tell you all the details of our incredible story. But to make a long story short, my wife ended up on total bed-rest in the hospital for six weeks before our daughter Tehila was born at 28 weeks. She then spent three months in the neonatal unit and came home just over three months ago. Incredibly, she had no bleeding in her brain and no major problems with her organs or limbs. Though initially she struggled a bit with her underdeveloped lungs, they eventually came around and today she is at home smiling, sucking on her fingers, and crying (!) just like a normal baby.

Now, I’m not a doctor nor the son of a doctor. I’m not qualified to give medical advice and neither do I want to. But what I do want to say is that there is another Factor that the world chooses to ignore, but that we as believers must figure into the equation.

You see, God has no place in secular science or in philosophy. From a strictly medical perspective, the doctors were right. We should have aborted. Maybe it is true that babies that are in the situation that my daughter was in have no hope for a normal healthy life. But again, we believers play by a different set of rules. We live in a different kingdom. We believe that there is a God who is all powerful, who can and does, work in our lives. Now, maybe we can forgive non-Christians for failing to take into account the fact that God can (notice that I didn’t say “will”) do the impossible. But if truth be told, the God-factor has no place in the everyday life of many believers in Jesus either. Sadly, God is abstract for them. He’s merely someone that you talk about, sing to on Sunday mornings for 45 minutes, but don’t really trust in. He’s theoretical. He’s simply the distant foundation for our political views.

But let me encourage all of you readers out there: God’s not theoretical. He does see the situations we face, he is involved in our lives, and sometimes (not every time) he even does the impossible.

June 5, 2015 Preston Sprinkle and Jeff Cook: A Debate about Homosexuality
Recent Comments
0 | Leave a Comment
Browse Our Archives
Related posts from Theology in the Raw 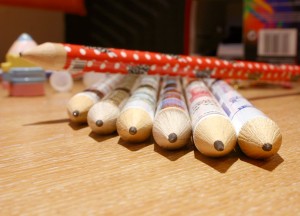 Evangelical
The Benefits of Homeschooling
Theology in the Raw

Evangelical
Do Pastor Kids Have to Be Saved?
Theology in the Raw

Evangelical
Theological Thoughts on Parenting
Theology in the Raw

Evangelical
Did God Kill Jesus?
Theology in the Raw
TRENDING AT PATHEOS Evangelical