Do Liberalized Views of Sexuality Cause Sexual Assault?

The Washington Examiner recently published a piece on the recent controversy over the failure of administrators at conservative Catholic colleges to respond to victims of sexual assault.

The main contention of its author Jeremiah Poff (a current student at Franciscan University of Steubenville) is that such “devoutly Catholic institutions” have not neglected to address the problem of sexual assault, but are rather “on the front lines of preventing such behaviors.”

In abstract, his argument is rather straightforward:

P1          Sexual assaults occur because of liberalized views of sexuality.

Note that this argument does not aim to establish that the administrators at FUS fulfilled their duties to respond to victims of sexual assault. Rather, the argument is that sexual assault does not happen at FUS.

Much of Poff’s piece focuses on bolstering premise 2: FUS has actively promoted traditional Catholic teaching on human sexuality, and thus eradicated extramarital sex, use of contraception, acceptance of the LGBT+ lifestyles, etc., from its campus.

Now this is certainly the impression the administration of FUS would like to leave upon prospective students and their families—especially those who hope FUS is essentially a “safe space” for their homeschoolers. But, as a relatively recent alumnus of FUS, I am afraid Poff is astonishingly naïve on this point. Like at any other university, many students at FUS are sexually active. To believe otherwise is to live either in denial, or else in a rather durable bubble. (There is plenty of both at FUS.)

But the heart of Poff’s argument lies in premise 1 above—in the idea that sexual assault occurs because of liberalized views on sexuality.

It should be noted that this correlation between sexual assault and sexual promiscuity is also assumed by the FUS administrators described in Jenn Morson’s original article on FUS and Title IX. “What did your dress look like?” “Why were you drinking in the first place?” (Or as Krason puts it: “Don’t women have to be attentive not to create situations that could open the door to it?”)

But premise 1 is false for several reasons.

This point shows some cognitive dissonance in the views of FUS’s defenders, such as Poff, Krason, and Hendershott. On the one hand, they maintain that liberalized views of sexuality are responsible for sexual assault. On the other, they complain that liberalized views of sexuality focus so much on consent. In the words of Moana’s Tamatoa: “Pick one! Pick one!”

The reason is that sexual assault has little to do with liberalized views of sexuality, but rather with the exercise of power. Historically, men have exercised more power over women, and thus women have been the primary target of sexual assault. But sexual assault will occur wherever there is a disordered view of power: that power is not meant for service, but for the exploitation of those over whom one holds power.

But worse than being “merely” false, Poff’s first premise is also a pernicious, harmful lie. Its message is that the young men and women that are victims of sexual assault are responsible for the fact that they were assaulted. They played with fire, and got burned.

One reason why this idea is pernicious is that it reinforces the harmful message many victims of assault already internalize: that the assault was their fault. To those who have not experienced trauma, it can be difficult to understand why victims of sexual assault would blame themselves.

But the reason is paradoxical: for an individual brutally stripped of all agency, blaming oneself can be a way of apparent self-empowerment.

“If only I hadn’t…”—This is what so many victims of sexual assault repeat to themselves as a mantra, hoping that there was something they could have done, or else can now do. It can take years of therapy for a victim of assault to retrain her self-blaming thought-processes, but in the meantime we have a duty to affirm—wholeheartedly, without reservation—that no victim of assault is to blame, in any way, for what happened to them.

Accordingly, Poff’s attempt to deflect criticism of the institution by suggesting that young men and women are sexually assaulted because of sexual promiscuity is symptomatic of much, much deeper problems. One of the problems is what some authors have described as “purity culture,” a perversion of Christian sexual ethics which regards sexually active women as impure, disgusting, and worthy of shame.

Another is simply the fact that FUS is a business, and thus interested in advertising its brand. Its current brand, as built up by former President Fr. Terence Henry, is that FUS is an oasis of “true Catholicism” where sunbeat neocon culture warriors can send their children to arm them against the coming Soros-funded apocalypse. Accordingly, the investigation into sexual assault at FUS is first and foremost a financial hazard: reports of assault threatens to dissuade parents from sending their daughters there, and damages the university’s image, which in turn affects the bottom line.

Poff concludes his article with an attempt to discredit the victims of sexual assault: “If someone is truly hurt, there is no doubt in my mind that the entire community would rise up and support them, not shame them.”

Don’t let the logic of this statement pass you by.

If the victims of sexual assault were genuine, then they would be supported by the university community, rather than shamed. But they are being shamed, disbelieved, regarded with suspicion, accused of bearing malicious intent (and so much more). Therefore, the victims are fake. I simply wish to note that, in addition to reflecting the callousness of many who have responded to the victims of sexual assault, this is an example of the No True Scotsman fallacy.

FUS strives to be a Christian university. The heart of Christianity is daily repentance: the free and humble admission of one’s wrongdoing, the request for forgiveness, and the resolution to do better through the activity of God’s grace. Accordingly, in responding to this controversy, there is no room for trumpeting one’s self-righteousness. The only Christian response is to repent.

To follow Christ also means taking sides with the most vulnerable in society—the poor, the unborn, the refugee, the victim of assault.

Accordingly, the administrators at FUS must view this controversy as a litmus test of their own discipleship. If they are indeed “passionately Catholic,” then it is high time they stand up for victims of sexual assault. 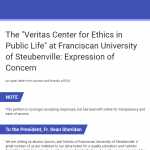 May 1, 2018
Alumnae Respond to Recent Confusion over Open Letter to FUS
Next Post 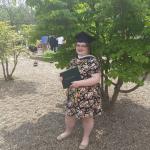 May 15, 2018 Pondering a Bittersweet Graduation
Recent Comments
4 Comments | Leave a Comment
Browse Our Archives
Related posts from The Shoeless Banshee: Meanderings Beyond the Pale