Musing Musically: Theresa Williams Reflects on “August and Everything After”

There wasn’t a cloud in the blue sky as my friend and I drove on the highway.

She was taking me to see the ocean for the first time, the Jersey Shore. We had forgotten to grab CDs for the trip (and iPods still weren’t very widespread; plus, her stereo system didn’t have an auxiliary jack anyway) and realized we had, in fact, brought only one—Counting Crows’s August and Everything After.

Though some of Counting Crows’s songs were part of my musical vernacular at that point (“Mr. Jones and Me” and “Accidentally in Love” were always quite popular), I had never listened fully to their debut album. It was fourteen years old by the time I first listened to it on that trip to the shore and my immediate reaction was, “They are so much more than what I’ve reduced them to.”

“Mr. Jones and Me” was the breakout hit from Counting Crows’s 1993 debut album August and Everything After, and it’s the song they are still mainly recognized for. Perhaps you’ve never heard of Counting Crows, but almost assuredly you’ve heard “Mr. Jones and Me.” It’s not hard to see the song’s mass appeal: it’s upbeat, catchy, plays on the well-known trope of “keeping up with the Joneses,” and echoes that sense of belonging we all yearn for. It’s a well-crafted song! But, almost impossibly, it’s nowhere near the best on the album.

The opening track of the album, “Round Here,” sets the tone—and possibly the core of what Counting Crows does—blending melancholy, hope, and storytelling. Adam Duritz, lead singer and principal songwriter for the band, further drives the emotion of their music and lyrics with his expressive voice. He sings in an almost conversational tone, sometimes dropping his voice on words and phrases so much that he’s practically mumbling. Sometimes his voice waivers and quivers or his vibrato takes over. Sometimes he opens his voice so much that it’s clear enough to cut right through flesh.

As we listened to August and Everything After on repeat on our journey to and from the Jersey Shore, each song seemed to hit me physically, each in a new way.

While I had experienced this physiological phenomenon in response to individual songs before, I had never viscerally reacted like that to an entire album before.

I could feel my heart rate pick up and slow down. One song gave me full-body goosebumps. Other songs made me heavy with emotion and nostalgia, and I could do nothing else but stare out my window and watch the cars speed by. I felt electric and I felt shut off. I don’t remember exactly what I thought of each song as I heard them for the first time, but I remember how they felt—because they still make me feel these ways.

I didn’t listen to August and Everything After in its entirety again for many years.

In part, no doubt, because I’d listened to it so much over the span of a few days during that beach trip. But also because I couldn’t keep going through that full range of emotions all at once again.

A couple years later, I was driving across I-80 from Pennsylvania to California, where I was about to start a new life, with a new friend beside me. I was leaving my childhood home behind in search of the place I belonged, the place that was calling out to me. I-80 is a terribly boring drive right through the heart of America and all its cornfields. I’ve likened it to the purification found in purgatory after leaving one life and going towards a new one. Get through all of this, learn about yourself, become better or, at least, different, go on to something new and better.

As we drove through Omaha, Nebraska, I made sure Counting Crows’s “Omaha” was playing. By this time, I had an iPod, and one of my first musical purchases for it had been August and Everything After. My 2001 black Toyota Camry still didn’t have an auxiliary jack, but I had bought a cassette converter that hooked up to the iPod and then played it through the tape deck.

I listen to music through an app on my iPhone now, and my vehicles all have auxiliary jacks. August and Everything After, or at least some of its songs, are still always on my playlists or favorites.

This album is so embedded in my psyche that hearing its songs as I think is about as natural as breathing.

About a week ago, I started fleshing out an idea for a new novel I’ve been mulling over and, out of nowhere, “Anna Begins” started running through my mind repeatedly while I wrote. It consumed me so much that I listened to just that song on repeat for over an hour, lying in bed next to my husband late at night with my earbuds in.

When I think about moving back to California, how much I want to and how afraid I am that I never will, often “Round Here” will pop into my head. When I hear “Rain King,” I think of a certain friend, a friend whom I’ve never listened to Counting Crows with—nor do I even know if he likes them. Most of the songs on August and Everything After have random and not-so-random associations like that for me. Specific memories or images will be conjured as I listen to different songs, and certain concepts or people or memories will bring up certain songs.

The album is twenty-five years old now and still a perennial favorite.

The closing song of the album is “A Murder of One.” Its title is a little ironic because a group of crows is called a “murder,” so you can’t have a murder of just one. The music is also ironic, as it’s extremely upbeat while the lyrics essentially talk about loneliness and changes. But the irony is well-placed. If you don’t belong anywhere else, you belong with you; you can be your own clan, your own murder of crows. And, summing up the entire album in a few lyrics, you create your own life, so don’t waste it by denying your purpose or by believing you, in and of yourself, aren’t enough.

As you stood there counting crows

One for sorrow, two for joy

Three for girls and four for boys

Five for silver, six for gold

Seven for a secret never to be told

But there’s a bird that nests inside you

Sleeping underneath your skin

Yeah, when you open up your wings to speak

I wish you’d let me in

Theresa Williams is a graduate of Franciscan University of Steubenville where she obtained her BA in Theology, Catechetics/Youth Ministry, and English Writing. Her writing has been featured at Ignitum Today and the National Catholic Register, and she currently contributes weekly at EpicPew. She lives with her husband and two children in Colorado. You can find her on Facebook or on Twitter @TheresaZoe. 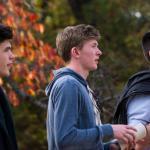 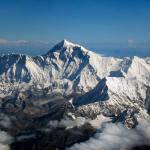