Patheos Explore the world's faith through different perspectives on religion and spirituality! Patheos has the views of the prevalent religions and spiritualities of the world.
As we move towards Samhain and the thinning of the veil, one of the things that has been very present on my mind is the topic of Ancestor Veneration. We know that this was hugely important to people of the past and many modern day cultures (such as Japan and Mexico) still have a strong tradition of ancestor veneration. Unfortunately, in the culture that I am most familiar with (the United States in 2017), we have a very strange and unnatural relationship with death, the elderly, and our ancestors.

For example, when was the last time any of us visited a cemetery (for a purpose other than enjoying it)? In the Victorian Era, it was very common to visit your family plot and leave things like flowers. Aside from a few veterans organizations and the Daughters of the American Revolution, graves are largely left untended other than by immediate living relatives. On top of this, our culture is so extremely removed from the aging process. We place our elderly in nursing homes and basically just forget about them (obviously, I am NOT speaking for everyone, many of us care very deeply and help as best we can). In our society, youth and beauty are seen as an accomplishment, when in reality they are just a stage in life. We no longer hold our elders in esteem. They aren’t consulted about their life experience and how best to approach problems. Our society has been completely segregated based on age. This to me is one of the biggest problems facing us today. There is no such thing as multigenerational living anymore; is it any wonder so many new parents face things like depression? They don’t have anyone around to help lessen the burden and offer valuable life experience… I have clearly gotten off topic a bit here but I feel like it needed to be said!

Back to ancestors…I spent 2016 living abroad in New Zealand. While I was there, I took it upon myself to learn as much as I could about the indigenous people, the Maori. They are descended from ancient seafaring Polynesians and are believed to have settled in New Zealand about 1000 years ago*. They have managed to maintain many of their cultural traditions despite a systematic effort to completely colonize them. One thing in particular, really spoke to me; the principle of whakapapa, or genealogy. This is a sacred art form, done in the past exclusively by memorization but many have started to write down their lineage. Many Maori can trace their ancestry back this way up to 30 or more generations. It occurred to me while I was there, that this is something we have completely lost. Most of us can trace our ancestry back 2 or 3 generations at most. In forgetting this, we have lost something extremely valuable.
On the scale of how much spirits actually care about our well-being as humans, who logically would you think cares the most? The ancestors of course. They are the ones who have a vested interest in ensuring the continuation of their progeny. And for our own benefit, we can learn so much from working with them.

I believe there are all kinds of ancestors. Our actual blood kin would be the most obvious. But there are all other types as well. Spiritual ancestors would be those who have gone before us on our own path, for example those of the Feri Tradition would probably honor Victor Anderson as a spiritual ancestor. There are also ancient ancestors, the Indo-Europeans who are the forefathers of almost every European culture for starters. Even historical figures of the past who we feel called to could also be considered ancestors as they have influenced your life in some way. I am speaking here from a Eurocentric point of view because that is my heritage and what I know. Asian, African, South American, Pacific Islanders, Native American, and Middle Eastern peoples (to name a few) all have their own distinct ancestral backgrounds and traditions which I unfortunately do not know as much about.
I also want to state here that I am completely against racial injustice and exclusionary practices, like those practiced by some Northern traditions. I believe that the gods may call any of us, regardless of our ancestry or race and I vehemently oppose those who have turned some branches of paganism into a marketing tool for white nationalism.
Do any of you have a tradition that honors your ancestors? If so, I’d love to hear about it!
I will be posting later on in the month with some ideas about starting your own ancestral veneration practice. 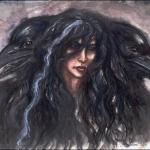 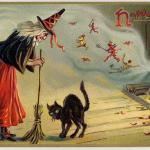 October 26, 2017 The Greatest Halloween Special Ever
Recent Comments
1 Comment | Leave a Comment
Browse Our Archives
get the latest updates from
The Wandering Witch
and the Patheos
Pagan
Channel
POPULAR AT PATHEOS Pagan
1

Irish-American Witchcraft: Why the Roots of...
Agora
Related posts from The Wandering Witch