How Do You Worship the Gods In a Museum?

For those that have been following my trip on Instagram, you’ll know that I’m about half-way through a three month trip overseas with the second half being spent in France with my in-laws. During the downtime in one place, I’ve had a lot of time to contemplate my journey during the past few weeks, and one of the things that I’ve been thinking most is the topic of gods and museums.

I’ve visited many of the most famous museums in the world this past year: the British Museum, the Cairo Museum, the Vatican Museums, the Louvre, the Israel Museum, and the Istanbul Archaeological Museums…and the list goes on.

While these museums have been awe-inspiring and breathtaking at times, one thing that I’ve been really struggling with is encountering my gods in the museums. Some of the statues I’ve seen make me want to get down on my knees and worship, pour libations, and to spend hours in contemplation and meditation. Unfortunately, though, museums aren’t exactly suited to this kind of activity. The closest I’ve come is sitting down on one of the occasional benches that could be found, attempt to ignore the hoards of tourists and try to pray quietly to myself.

Perhaps many of you don’t have this problem, however, I’m an active polytheist and I was raised in a very religious family, so prayer and exaltation feel natural to me. I am also constantly moved and awed when I encounter my gods and it’s not uncommon for me to find myself on the verge of tears at sacred sites. Maybe I’m crazy, maybe not.

Granted, iconography from almost every major religion can be found in museums. I’ve seen more Catholic, Orthodox, Jewish, Muslim, Buddhist, and Hindu objects than I can shake a stick at. But, these religions also have very active places of worship whereas modern pagans don’t enjoy the same luxury. We generally have to settle for private practice in the quiet of our own homes.

Luckily, there are a few places that we have been able to claim as our own: Salem, Stonehenge, and Newgrange to name a few off the top of my head. These sacred locations are flocked by thousands of pilgrims every year despite the fact that the connection between them and modern neo-paganism/witchcraft is hazy at best.  I’m not saying we aren’t connected to them; in fact, I go to Salem at least once a year because it’s an incredibly spiritual place to me; and seeing Stonehenge in person was one of the highlights of my life.

It’s just that the majority of towns in the world don’t have active temples dedicated to our gods. So when I see statues, carvings, and images of my gods in museums it makes me so incredibly sad that they aren’t housed in temples for their honor that would allow me to worship them.

Which brings me to the crux of my issue: How does one pay homage to a god that is sitting behind a glass window?

I still haven’t found the answer.

*And for those that would say the gods are always around us and we can make offerings elsewhere: I agree, and I do. But, sometimes it just sucks being a pagan in a world full of monotheists. 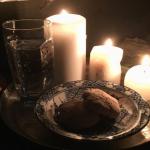 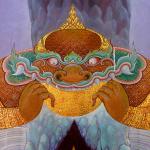 July 23, 2018 Eclipses: The End of the World As We Know It?
Browse Our Archives
get the latest from
The Wandering Witch
Sign up for our newsletter
POPULAR AT PATHEOS Pagan
1