Atonement and the Sacred Heart of Jesus

Atonement and the Sacred Heart of Jesus June 14, 2019 Tina Mayeux 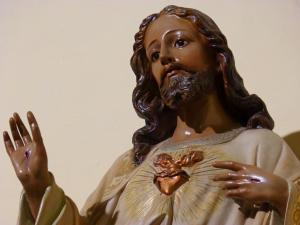 June is the month dedicated to the Sacred Heart of Jesus.  Pope Leo XIII, in Annum Sacrum (On Consecration to the Sacred Heart), describes that Heart as “a symbol and a sensible image of the infinite love of Jesus Christ which moves us to love one another.” In his June 9, 2019 Angelus address, Pope Francis spoke of the Sacred Heart as such: “Popular piety highly prizes symbols, and the Heart of Jesus is the ultimate symbol of God’s mercy – but it is not an imaginary symbol, it is a real symbol, which represents the center, the source from which salvation for all humanity gushed forth. We often think of the symbol of the heart as sentimental, flowery, and emotional; however, the reality of Jesus’ Sacred Heart is that it suffered much in the Passion because of the pain and humiliation he endured and because of the ingratitude and contempt with which humanity, even Christians, often treat him. In the symbol of the Sacred Heart, we are reminded that love is an act of the will, a decision; not a feeling or an emotion.

Feast of the Sacred Heart

Devotion to the Sacred Heart originated in the 11th century with private devotions to the wounds of Christ.  In 1670, St. John Eudes, a French priest, celebrated the first Feast of the Sacred Heart. In the same time period, St. Margaret Mary Alacoque, a French Visitation nun, began having visions of Christ and experiences revelations that he wished his Sacred Heart to be honored.  In the revelations, Jesus confirmed that he desired that the feast of the Sacred Heart be established.  “Behold this Heart which has so loved men that It spared nothing, even going so far as to exhaust and consume Itself, to prove to them Its love. And in return I receive from the greater part of men nothing but ingratitude, by the contempt, irreverence, sacrileges and coldness with which they treat Me in this Sacrament of Love. But what is still more painful to Me is that even souls consecrated to Me are acting in this way.  After speaking these words, Jesus expressed his desire that the first Friday after the octave of Corpus Christi be dedicated to a feast of his Sacred Heart, asking that an Act of Reparation be made on that day and that Holy Communion be received to atone for sin.  He promised to open his Sacred Heart and pour out his Divine Love on all who would practice this devotion.  On On May 8, 1873, Pope Pius IX approved the devotion to the Sacred Heart and it spread throughout the world.

Atonement to the Heart of Christ

Jesus requested that St. Margaret Mary perform specific acts of atonement to appease his Sacred Heart for the offenses committed against him by sinners.  To console his Heart from the anguish he felt when his disciples could not stay with him one hour in the Garden of Gethesemane, he asked her to commit to an hour of prayer on her knees each Thursday night.  He assured her that by undertaking these sacrifices and penances, she would bring him relief and consolation from the bitterness his Heart felt from the rejection and ingratitude of sinners.

Theologian Ludwig Ott defines it as “the satisfaction of a demand. In the narrower sense it is taken to mean the reparation of an insult. This occurs through a voluntary performance which outweighs the injustice done.” (Fundamentals of Catholic Dogma, 186-187). The ultimate atonement was the Passion and death of Jesus on the Cross, which redeems mankind from sin.  Christ died to take away our sins and save us from eternal damnation.  However, we can offer prayer, penance, fasting and other actions to atone for our sins and the sins of others.  Many of the saints have undertaken and encouraged acts of reparation to Jesus, and private revelations have historically included messages calling the faithful to prayer and penance.  “Penance then is, as it were, a salutary weapon placed in the hands of the valiant soldiers of Christ, who wish to fight for the defense and restoration of the moral order in the universe. It is a weapon that strikes right at the root of all evil, that is at the lust of material wealth and the wanton pleasures of life. By means of voluntary sacrifices, by means of practical and even painful acts of self-denial, by means of various works of penance, the noble-hearted Christian subdues the base passions that tend to make him violate the moral order.” (Pope Pius XI, Caritate Christi Compulsi (On the Sacred Heart)

Think of the old example of a child hitting a baseball through a neighbor’s window.  The parents then require their child to make up for the damage done by paying for the window to be replaced or by working off the debt.  Similarly, we can do penance and atone for our sins through prayer, fasting, and other works.  “Absolution takes away sin, but it does not remedy all the disorders sin has caused.  Raised up from sin, the sinner must still recover his full spiritual health by doing something more to make amends for the sin: he must “make satisfaction for” or “expiate” his sins. This satisfaction is also called “penance.”   (CCC #1459) We perform the penance given to us by the confessor, but we can do more to satisfy the debt. We should always remember that “the satisfaction that we make for our sins, however, is not so much ours as though it were not done through Jesus Christ. We who can do nothing ourselves, as if just by ourselves, can do all things with the cooperation of “him who strengthens” us.” (CCC #1460)  The month of June is an ideal time to reacquaint ourselves with the devotion to the Sacred Heart and to unite our hearts with his, who loves us and desires our love in return.  Through unity with this Heart, we can atone for our faults and sins and grow in holiness.

Sacred Heart of Jesus, have mercy on us.

June 9, 2019
Modesty, True Femininity, and Being a Woman of God
Next Post

June 18, 2019 By His Wounds -Three Best-Kept Secrets of Healing the Heart
Browse Our Archives
get the latest from
Catholic
Sign up for our newsletter
POPULAR AT PATHEOS Catholic
1