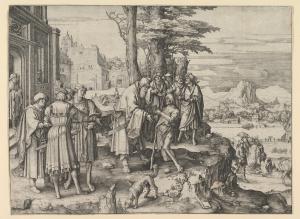 We all know the story of the Prodigal Son. Much attention has been given to the wayward son who asked for his inheritance early, then squandered it all on a life of dissolute living. We all know how he found himself in dire straits and had a conversion of heart, bringing him to his knees in humility and repentance, and returned to his father’s home asking for forgiveness.

An important lesson can also be drawn from the example of the older son in the parable. For years he was faithful and hardworking. The gospel even mentions that he was on his way home from working in the fields when he became aware of his younger brother’s surprising return. The older brother had been conscientious and diligent, but he was far from perfect. His faults were exposed when his prodigal brother was greeted with a robe, a ring, sandals, and the fattened calf instead of a scornful reproach from the father. Instead of welcoming his brother, he reacts with anger and outrage at the warmth and love that his father extends to him. The jealousy and bitterness in the older brother’s words and in his tone are palpable:

“He became angry, and when he refused to enter the house, his father came out and pleaded with him. He said to his father in reply, ‘Look, all these years I served you and not once did I disobey your orders; yet you never gave me even a young goat to feast on with my friends, but when your son returns who swallowed up your property with prostitutes, for him you slaughter the fattened calf.’” (Lk 15:28-30)

What Are Our Motives?

The negative reaction of the older brother causes us to question his motives for his obedience and good behavior. Was he serving his father simply so he could have the upper hand over the younger brother and because of the honor and prestige he had over him? His jealousy shows his lack of love and compassion for his younger brother and his lack of humility. The example of the older brother presents us with another reflection: What are our motives and intentions for serving Christ? Is it only to receive the reward of attention and respect here on earth? Is it to receive honor or accolades?

God wants our motives to be pure, and we all fail at this from time to time. We often don’t like it when another person or group gets attention and credit and we are forgotten or overlooked.  The Father knows our motives and our hearts. We should examine our conscience and reflect on our actions to recognize and overcome any pride we happen to unknowingly harbor. The challenge is to get to the point where we serve God for his sake and the sake of loving him alone, rather than to win a spiritual “prize” or contest over others.

The Litany of Humility

Most of us can probably relate to both the older and younger brother at differing times in our lives. When I feel envious of another’s good fortune like the older brother, I refer to the Litany of Humility, a prayer which is difficult to pray because the petitions within it seem contrary to our human nature and anomalous to ask for. Naturally, we desire to be esteemed, loved, extolled, honored, and praised. In the litany, however, we are asking God to deliver us from the desire for all of these things. We are essentially asking, through praying the Litany of Humility, to be people of the Beatitudes.

The Example of St. Therese

A saint who is often noted for her practice and perfection of the virtue of humility is St. Therese of Lisieux in her “Little Way.” During her life, she was a completely unknown cloistered French Carmelite nun, although she had dreamed of being a missionary in a foreign land. She did all for Christ, unseen and unknown, without a reward on earth except for the peace and love of Jesus that she experienced. Although she was always faithful to God – having remarked that she never committed a mortal sin – she was always welcoming to the prodigal children that God placed in her path. Her love for sinners was exemplified on the occasion when she prayed for the salvation of the soul of a convicted criminal she read about in the newspaper who was scheduled to be put to death. Her prayers for him were answered when he was said to have kissed the crucifix three times before his execution.

When God Moves Our Furniture Around

We are reminded that, as Christians, we must welcome the prodigal children even when it is difficult. In our family, we often joke that just when we seem to have our spiritual house in order and get cozy and comfortable with the layout of our lives, God comes and “moves our furniture around.” Some upsetting event or trying circumstance occurs and throws us off balance, forcing us to reevaluate and reorient ourselves. For the older brother in the parable, the homecoming of his wayward brother upset the balance of his life and exposed his dormant faults of resentment and envy. What are some ways that we can be humble and ready when God moves our own furniture around and exposes our faults?

(Image from: Metropolitan Museum of Art)

August 27, 2019 The Church Is the Road Map to Life
Browse Our Archives
Follow Us!

The Demand to Open Churches Is...
suspended in her jar
Related posts from The Way of the Wildflowers

Catholic
A Shower of Roses - Three Saints Inspired...
The Way of the Wildflowers

Catholic
How To Pray When We Don't Feel Like...
The Way of the Wildflowers
TRENDING AT PATHEOS Catholic

Kids Aren't Projects: The Myth of Parenting "Techniques"...
The following article is part of our ongoing series on the Liturgy...
view all Catholic blogs
Copyright 2008-2020, Patheos. All rights reserved.