How to be a Saint: Learning from the Masters

How to be a Saint: Learning from the Masters August 10, 2019 Tina Mayeux 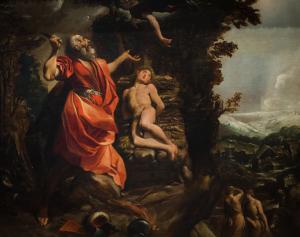 As a mother, I often think about the Old Testament story of Abraham’s sacrifice of Isaac with awe and amazement. God put Abraham to the test in an unthinkable way. Nowhere in the story does it say that Abraham questioned or complained about what God was asking him to do. God said to him, “Take your son Isaac, your only one, whom you love, and go to the land of Moriah. There offer him up as a burnt offering on one of the heights that I will point out to you. (Gen 22:2) In response, the scripture says Abraham simply rose the next morning, saddled his donkey, cut the wood for the burnt offering, and with Isaac and two servants set out for the place God had instructed him to offer the sacrifice. What faith and obedience! Abraham was faced with a choice: disobey God and save his son or be obedient to God’s command and give up his only son, the one upon whom the promise of Abraham’s many descendants rested. He chose obedience, and God intervened, telling him to spare his son.

Obedience is the Way

As Catholics, we encounter choices daily of whether to follow the teachings of the Church or to do our own will. Many times, the choices can be difficult and require sacrifice and self-denial. Thankfully, it is not likely that we will be tested as Abraham was; however, we do face smaller-scale choices which can affect our lives for better or worse. Obedience to the teachings of the Church can seem challenging, but there is a reason that we are asked to discipline ourselves and abide by her commandments and guidelines. The reason is that obedience leads to our ultimate happiness and fulfillment here on earth and with God in heaven. Abraham knew and trusted that God was good and that obedience to him was the only way, as difficult as the choice had to be for him. He exercised what is known as ‘heroic virtue’ in assenting to the request that he sacrifice his son.

Many of the saints have also demonstrated this heroic virtue in choices and sacrifices that they have made. According to the Catechism of the Catholic Church, “a virtue is an habitual and firm disposition to do the good. It allows the person not only to perform good acts, but to give the best of himself. The virtuous person tends toward the good with all his sensory and spiritual powers; he pursues the good and chooses it in concrete actions.” (CCC 1803) According to an article on heroic virtue by Bishop Robert Barron, virtue is primarily what makes a person a saint, not visions, locutions, or ecstasies. The Catholic Church lists four cardinal virtues: justice, temperance, prudence and fortitude and three theological virtues: faith, hope, and love, the greatest of these being love. A person who is found to have exemplified these virtues to a heroic degree is declared a saint.

Martyrdom is the Ultimate in Heroic Virtue

The martyrs especially have demonstrated heroic virtue by sacrificing their very lives for the sake of the Gospel. Their choices reflected that they were willing to give up everything for Jesus. St. Maximilian Kolbe offered his life for that of a married man with a family at Auschwitz. St. Gianna Beretta Molla chose to save the life of her unborn child instead of her own. Christian history is full of examples of those who gave their lives as martyrs.

The Woman who embodied heroic virtue to a perfect degree was Mary. When visited by the Angel Gabriel at the Annunciation, Mary gave her fiat, or her ‘yes’ to God and chose the way of obedience. As a result, God blessed her as the Mother of the Savior and our Mother. The doctrine of the Immaculate Conception states that, “The most Blessed Virgin Mary was, from the first moment of her conception, by a singular grace and privilege of almighty God and by virtue of the merits of Jesus Christ, Savior of the human race, preserved immune from all stain of original sin.” [Pius IX, Ineffabilis Deus (1854)] St. Louis de Montfort spoke of the “ten principal virtues of Mary,” which are: “her Angelic Sweetness, Ardent Charity, Blind Obedience, Constant Mental Prayer, Divine Purity, Divine Wisdom, Heroic Patience, Lively Faith, Profound Humility, and Universal Mortification.” (True Devotion to Mary)

Probably not many of us have progressed to the point of heroic virtue like Mary and the saints in our spiritual lives. These outstanding virtues can seem difficult or even impossible to acquire. I struggle with staying patient when my children forget to brush their teeth! However, we can start with the small choices which make us stronger and build upon that strength. Making little sacrifices are good training for the more consequential ones. Even the saints had to begin somewhere! We can gain mastery over our sometimes out-of-control passions and emotions if we strive to conquer them incrementally rather than all at once. Over time we develop morally ethical habits of behavior.

In comments on Pope Francis and Virtue Ethics, Bishop Barron explains that we tend to grow in moral virtue mostly by habituation – by observing and imitating the spiritual masters and repeating these good actions over and over again. He remarks that Aristotle has said that the best way to learn the moral life is to “find the good man, watch him, and then imitate him.” For example, one does not learn to paint simply by reading the rule book of painting. Rather, he says, the ideal way to acquire the skill of painting is by acting as an apprentice to a master painter; by observing and imitating his art. Jesus is the like the expert painter who we follow as apprentices, and by serving him and being exposed to him we become saintly. Mary and the saints are also models for us to emulate. If we assume their holy habits, we become more like them and like God. Pope Francis has said also that “habituation in virtue actually leads to freedom,” even though according to the modern ideas of freedom some would say these two ideas seem contrary.

Called to be Saints

So, if we want to acquire the heroic virtue of the saints, and of Abraham on Mt. Moriah as he became willing to give up his only son, we should begin incrementally and observe and imitate the lives of, first of all, Jesus and Mary, and next, the saints. We are all called to sainthood and this goal is not out of our reach. We can start small, follow and observe those who have gone before us in the spiritual life, and learn from their wisdom and virtue. God is patient with us, he loves us and desires our sanctity. We should trust him to help form and mold us into the saints we were meant to be.

August 22, 2019 What Does God Say About Worrying?
Browse Our Archives
get the latest from
Catholic
Sign up for our newsletter
POPULAR AT PATHEOS Catholic
1

Catholics (?) Trash, Judge, & Mind-Read...
Biblical Evidence for Catholicism
Related posts from The Way of the Wildflowers

"I Confess" Versus "Rear Window"
Another Day, Another Scandal I said at the beginning of my last...
view all Catholic blogs
Copyright 2008-2021, Patheos. All rights reserved.