When the Land Changes

I live in the Patapsco River valley. It’s not a tremendously large river, but its junction with the Chesapeake Bay forms Baltimore Harbor, site of the shipyards where a young Frederick Douglas tricked white boys into teaching him to write and which produced the clipper ships that kicked British ass on the high seas in the War of 1812 ; it was those shipyards that the British were determined to burn in the fall of 1814, leading to the rockets red glare lighting up the star-spangled banner over Fort McHenry. So the water that rolls off my front lawn passes by some historically significant places a little father along. And I’m just a few miles from the old site of Bloede’s Dam, a pioneering hydroelectric dam; silting problems with the dam’s led to the reforestation effort that eventually became Maryland’s first state park. So the region has a nice bit of environmentalism in its story.

Every bit of land has its own spirit, its genius loci, its kami, call it what you will, but accidents of geography and history make it more palpable in some places than others. I can remember stopping to fill my gas tank one summer day, the most mundane of tasks, standing at the pumps at the High’s store-cum-Shell station on Frederick road, with the steep rock face maybe fifty feet high behind it and the river itself winding through trees right across the street, and a moment of silence with no cars driving by, just the breeze rustling the trees, and feeling of welcome and belonging, as if the forest spirit had put a hand on my shoulder and given a friendly nod.

I do not say there is anything supernatural here, some literal ghost; but the interaction of the place and my mind creates within my experience a vague and dim perceived-person in much the same way that the intersection of a naked ape and my mind creates the perceived-persons who populate my experience of the human world. My parents, my teachers, my friends, my students, my lovers; each person-as-I-know-them is an interaction of a biological organism in (postulated) public space and my own mind. So if the interaction of geographical phenomena in public space with my mind creates something similar, well and good; in that sense and context the genius loci are no less real than my own mother or the other people of my experience.

And like those human people, the genius loci change with time.

The land changes. Until recently, that usually happened slowly (at least by our reckoning), but over the past two centuries we’ve gotten good at rendering changes on the landscape quicky, with chainsaws and earth-moving equipment and explosive blasting. And now climate change threatens to rewrite the very coastlines. (And to turn Maryland into a rainforest a la the Pacific Northwest, if the past week or two is a presagement of the future.) The land is changing more quickly than it has in millions of years.

What happens to the genius loci when the land changes so quickly?

What happens to the human persons we know when human bodies change quickly? Sudden change is stressful, even traumatic. Adolescents who hit growth spurts are rendered clumsy and often become uncertain and shy in response. A minor injury can change our lives in surprising ways; a sprained ankle can make someone unable to do their job and lead to a career change and a whole new perspective on life.

Sometimes these sudden changes can, in the end, be positive experiences, but while they are in progress they leave the person going through them stressed, upset, even irritable.

So we might find that the spirits of the land are in the same condition. Can you imagine a stressed-out land wight? An irritable kami? It may be useful to start thinking in these terms. 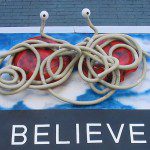 May 10, 2016
Religious Liberty: Something Pastafarians and Evangelicals Both Deserve
Next Post 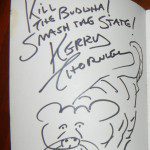 May 18, 2016 An Anarchist Goes To Court
Recent Comments
0 | Leave a Comment
Browse Our Archives
get the latest updates from
The Zen Pagan
and the Patheos
Pagan
Channel
POPULAR AT PATHEOS Pagan
1

Connecting to Gods for Whom There...
John Beckett
Related posts from The Zen Pagan

Experiencing Al-‘Uzza Healing Love
A few days ago, I felt a minor heartbreak when someone I've...
view all Pagan blogs
What Are Your Thoughts?leave a comment
Copyright 2008-2021, Patheos. All rights reserved.