I wanted to compile a list of some notable conferences coming up that folks should be aware of.  I get sent notice of great events somewhat regularly, and it’s a privilege to play a very small part of conference promotion.  All of these events are coming up in the next month or so.

1. Wednesday, September 23, 2009 | Ravi Zacharias | Ravi Zacharias International Ministries “Toward an Evangelical Understanding of Postmodernism and Mission” (Henry Center Scripture and Ministry lecture at 1pm in ATO Chapel at TEDS–free and open to all)

Event blurb from Dr. Zacharias: “Someone from India recently quipped to me, “India has gone from ancient to postmodern and skipped over the modern period.” Indeed, in distilling truth, it has been rendered to neutrality. How then, in a climate of cultural preferences (whether in the East or in the West), does one share the Gospel graciously and winsomely without it seeming like a cultural chiding or contravention? This is the essential challenge before us in the church today.”

2. In just one month, from October 6-9, 2009 in Jackson, TN, Union University is hosting one of the more interesting conferences to be held in conservative Christian circles in 2009-10.  It’s entitled “Southern Baptists, Evangelicals, and the Future of Denominations” and it is worth attendance and attention. I would highly encourage those who can attend this conference to sign up.  It’s just $85 per person until September 15, 2009 (register here).  The conference will feature leading evangelical lights like David Dockery, Al Mohler, Timothy George, Danny Akin, D. Michael Lindsay, Duane Litfin of Wheaton, Ed Stetzer, and many more.

4. The Gospel Growth=People Growth conference to be held October 14-16, 2009 at Trinity Evangelical Divinity School (Deerfield, IL).  I highly recommend that you go if you’re in the area–you’ll benefit from talks by Don Carson, Mark Dever, Philip Jensen, and more.  It’s kind of a mini-Gospel Coalition.  It’s very cheap–$59 for students, $99 for pastors and others.  It’s sponsored by a number of organizations, including the Henry Center and The Gospel Coalition. 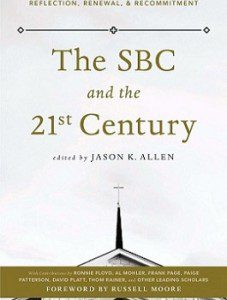 Evangelical
What Is the Future of the SBC?
Thought Life
TRENDING AT PATHEOS Evangelical

#OkMillennial, Church Is Still About Jesus
Well, my children have given me the worst cold and it’s snowing,...
view all Evangelical blogs
What Are Your Thoughts?leave a comment
Copyright 2008-2020, Patheos. All rights reserved.