Back to Your Posts: A Response to Dalrymple on Marriage 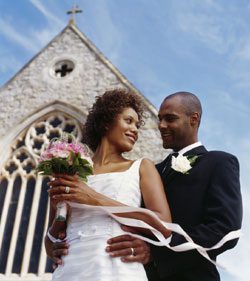 My friend and Patheos colleague Tim Dalrymple released a humdinger of a post yesterday questioning whether Christians should still publicly defend and advocate for marriage in the public square. The post, I must confess, took me aback–but this is what happens when you are in conversation with critical and creative thinkers.

Dalrymple first pointed out that try as we might, we actually cannot redefine marriage. He is quite right:

He also quoted Focus on the Family CEO Jim Daly, who argued commendably that “We should, humbly and winsomely, never stop contending for the things that matter to God.”

With that said, here is the crux of the matter for Dalrymple:

[A]re we so losing the culture on this issue that continuing to fight against same-sex marriage legally will so harm our witness, and thus harm our broader mission and our most important purposes, that the time has arrived to abandon the fight over American law?  Is it now the case, or could it ever be the case, that Christian opposition to same-sex marriage laws would become such a massive obstacle to our mission that it’s no longer worth it?

I have to confess: I’m not confident that this fight is worth the cost.  Amongst the overlapping circles of the young, the religiously unaffiliated, and cultural elites, much of the animus against Christians today derives (or at least claims to derive) from Christian “bigotry” against gays.  We are told repeatedly that it’s “hateful” to “deny gays equality” (what we would call “insisting on the actual definition of marriage”).  It strains countless friendships, comes between countless children and their parents, and erects altogether a monstrous hurdle for many people who might otherwise be open to hearing the gospel.

Dalrymple’s words are couched, of course, in his belief in biblical marriage. He does not, furthermore, explicitly call for the abandonment of the evangelical public square case for marriage.

This discussion relates to John McCain’s recent call to Republicans to give up the fight against abortion. Rod Dreher has made similar noises recently. I understand the desire to present our positions well in public. I affirm such an interest wholeheartedly. Let’s be as winsome, humble, kind, hopeful, and intelligent as we can be. Let’s exercise what Al Mohler has called “gospel shrewdness,” easily one of the most helpful ideas I’ve heard a Christian say in public. (Seriously, watch Mohler’s message on this subject. It is a kairos message.)

With all this said, let me speak my mind clearly: this kind of call, however well-intentioned, is a devil’s bargain. To be a Christian is to stand upon God’s truth, God’s wisdom. All else is sinking sand. The Bible is not a private book, and Christianity is not quietism. The book claims the sinner for its own, and the book claims meta-knowledge over all the cosmos. The Scripture does not merely contain wisdom–“5 Super-Easy Principles for Dieting!”–but is wisdom. Everything, every last thing, in the Bible is wise (2 Tim. 3:15).

So let’s start here, then go there. There is nothing in Scripture to apologize for; there is nothing to feel bad about. God doesn’t need new PR. He doesn’t need people to be embarrassed for him. He’s not looking for super-authentic apologizers who can clear up the scandal of his claims of cosmic dominion. He hasn’t overestimated; his calculations of rightness have not been proven wrong. He isn’t red-faced in heaven in the face of modernity, or postmodernity, or whatever else will come down the pike. He’s not scared by current events. His angels are not hastily recalibrating the kingdom program to retrofit it for an age that has caught them sleeping in the control room.

Let’s just start there, shall we? Heaven does not quake at earth. It’s the other way around. Maybe we’ll let God speak here, as the old King James so often does so well (see Alan Jacobs’s fantastic post on this subject):

Scripture teaches us that marriage is between a man and a woman (Gen 2-3; Eph 5). This is what we believe in our private lives, and this is what we stand for in the public square as we obey Christ by being “salt and light” (Matt. 5:13-14). The sovereign wisdom of God is utterly freeing for us. God has taught and showed us by principle and metaphor who we must be and what we must believe in order to live and thrive. Make no mistake: obedience brings blessing, disobedience a curse (Prov. 3:33).

Attention evangelicalism: please be spider-sense wary about the “Christian teaching is a stumbling block to the gospel” argument. This is, as I said earlier, a devil’s bargain. I’m seeing this idea spread throughout evangelical circles, and it’s a disastrous idea. It will eat away the substance of our faith, I assure you. Let’s play this out briefly.

You get the point? Do you want to keep going? Cause seriously, we could be here all day, bullet-pointing our way out of the embarrassing stuff of Christianity. And, by the way, the life-giving stuff as well.

Evangelicals are free to execute this maneuver. Just know as you do that this has all been done before. You’re not breaking free in a revolutionary way; you’re not pulling off a breathtaking display of sensibility and wisdom that no mind has ever conceived. You are walking in thoroughly trodden paths. The ruts are deep. German theologians traveled here in the Enlightenment period on their way to a new Protestantism that ended up being no Protestantism at all. Liberal American Christians came this way as well in the nineteenth and twentieth century. Many of them were never seen again. They left the embarrassing stuff behind at first; many of their descendants eventually left the faith altogether. The project they undertook was basically what some evangelicals want to pull off today. It was well-intentioned; it was grounded in rigorous thinking; but as you see in countless personal examples, it went disastrously.

The instinct here is to shed the husk and keep the kernel. What if–with apologies to Von Harnack–it is the husk that protects the kernel?

So let me urge in the strongest possible terms: don’t tweak your faith to make it palatable to the cultured despisers of religion. Guard the good deposit. (2 Tim. 1:13-14). Hold fast. Come what may, love and preach and believe the truth. Be the most winsome person you possibly can be. Learn from the mistakes of past evangelicals, sinners all just like you and me, who didn’t always practice what they proclaimed. Don’t lose your soul and win the battle. But don’t give up the battle. Keep standing for marriage, religious liberty, the unborn, victims of sex-trafficking, the poor.

The horses in the evangelical camp are spooked. I get that. I genuinely feel compassion for those who see our culture shifting and are alarmed. In a human sense, I can be alarmed, too. Things can seem to be crashing down all around us. In reality, Christians in most every era of human history have felt this way. Was it a picnic to be a Roman Christian in the second century? No. Was it fun to be at the circulation desk of the Alexandrian library when the Muslims swept like a wave into the city and killed every Christian they could find? No. Was it a picnic to live under Bloody Mary? No. Was it encouraging to see theologians make the aforementioned suicidal bargain in Enlightenment Germany in order to keep the faith alive? No.

I’m reading the new biography of Joseph P. Kenney by David Nasaw. It’s a great read. Nasaw spends many–a great, great many–pages chronicling the appeasement strategy of Kennedy, ambassador to the Court of St. James (England), prior to the American joining of battle in 1941. It’s physically painful to read about. It has reminded me of the nature of this world. Chinua Achebe was right: things fall apart. Evil rises up. Courage must be exercised. Real losses will be felt. This is the way of the world, even a world ruled by Christ.

Hear the call, then. Back to your posts, my friends. Back to the wall. Return to the struggle in which we are engaged, a struggle for truth, a great trial we must go through in order that our fellow man might flourish. We will not abandon our defense of marriage because God has given it to us. Full stop. We must obey him. After all, we want people to thrive. For love of God and neighbor, Christians must continue to stand for marriage, all the way to the potentially bitter end.

November 26, 2012
Should We Leave Our Marriages for Greener Pastures?
Next Post