Jonathan Edwards on the 2012 Presidential Election 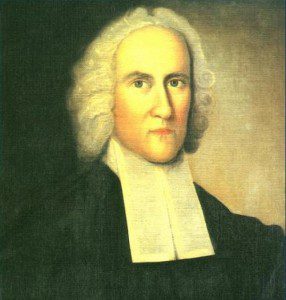 Christians disconcerted by the 2012 election results have invincible comfort and hope.  From his History of the Work of Redemption, here’s what Jonathan Edwards had to say about our ultimate hope, which triumphs over every obstacle, every Caesar, every hindrance of the preaching of the gospel:

We have seen how other things came to an end, one after another; how states and kingdoms and empires, one after another, fall and come to nothing, even the greatest and strongest of them. We have seen how the world has been often overturned, and will be more remarkably overturned than ever it has been yet. We have seen how the world comes to an end, how it was first destroyed by water, and how at last it shall be utterly and eternally destroyed with fire. But yet God remains the same through all ages. He was before the beginning of this course of things, and he will be after the end of them, agreeable to Psalms 102:25–27, “Of old hast thou laid the foundation of the earth: and the heavens are the works of thy hands. [They shall perish, but thou shalt endure.… Thy years shall have no end].” Thus God is he that is, and that was, and is and was and is to come. (Works 9, 516-17)

If you see America sliding, and I think we do, remember biblically driven material like this.  It is going to grow increasingly more difficult for Christians to be pristinely disentangled from politics in coming days.  The very foundations of western civilization are under serious assault.

In times like this, we are not being “pie in the sky” by going back to God’s absolute sovereignty and eschatological purpose.  We are being wise, and allowing truth to lead and norm us.

November 7, 2012
Can You Be a Good Pastor and Good Father?
Next Post

November 9, 2012 On Celebrity, Kevin Durant and the Need for Solace
Recent Comments
0 | Leave a Comment
Browse Our Archives
Follow Us!