Is Mark Noll Right? Is There No Evangelical Mind?

Is Mark Noll Right? Is There No Evangelical Mind? January 4, 2013 Owen Strachan 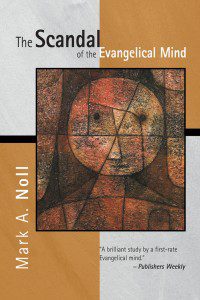 Paul Miller just wrote a fun post at Schaeffer’s Ghost, a blog I commend to you, reviewing Mark Noll’s Scandal of the Evangelical Mind. Paul largely agreed with Noll’s polemic:

But I have to say that I think Noll is basically right—or, at least, he was right when he wrote this twenty years ago. I say that with some trepidation for fear of offending our vast readership. I fear that in agreeing with Noll it will sound like an accusation that every evangelical friend and family member in my life is stupid. So, dear reader, I want to be clear: no, I don’t think you’re stupid.  (Besides, if you take time to read blogs like Schaeffer’s Ghost, you are certainly among the smartest and most intellectually sophisticated people out there).

But I confess that I have sometimes wondered if there is something in the culture of evangelicalism that undervalues the life of the mind. Noll’s criticism of dispensationalism was especially resonant for me.

Read Paul’s post here. I don’t disagree entirely with Noll. His basic point lands. Evangelicals in the last two hundred years have not put the majority of their energy into the life of the mind. There is a tremendous need for further investment here. So let that be said.

But with that stated, I think there’s room for a counter-narrative here. The “neo-evangelicals”–led by Billy Graham, the underappreciated Harold Ockenga, and the brilliant Carl Henry–actually did launch a theologically-oriented evangelical project in the mid-twentieth century. It didn’t succeed in spectacular fashion, but it did have many positive effects. Noll notes the neo-evangelicals in Scandal; he’s aware of them, of course, and he has some good things to say about them.

But I think he does not go far enough, and indeed I think there is more to be said. It’s true that we have no “evangelical Harvard,” no super-elite liberal arts college (I’m thinking top-10 US News, for whatever that’s worth) or high tier one research university (Baylor comes closest). But I think Noll might miss something in positing such an exacting standard of scholarly achievement. Evangelicals, over the last 50-60 years, have succeeded in improving many of their schools.

If you look at the literature about evangelical/fundamentalist institutions in the 1920s and 30s, you can see that they are deeply distrustful of the broader academy and its high standards. Many contemporary evangelical scholars fall in line with the academic guild in slamming fundamentalists, but there were pretty good reasons for at least some of this posture in that era (many Protestant schools jumped the tracks and abandoned core evangelical doctrine). In other words, some of the fundamentalists really did hold the line and defend the gospel.

Everything has changed since then. Schools like Union, Wheaton, Taylor, King’s College, Gordon, Messiah, Grove City, and my own institution, Boyce College, have ramped up their academic programs. I of course have concerns about an over-correction in this area among some institutions; some Christian colleges and universities are simply desperate for academic credibility, which poses a serious threat to ongoing scriptural fidelity. Ours is a serious intellectualism (the most serious, should be, given Matt 22:37), but it is a bounded one. We should advocate a confessional intellectualism (which, admittedly, many academics will distrust, and which may hamper the already difficult process of academic recognition).

This group shows, I think, that an evangelical mind definitely does exist. Is it coherent at every point? No. But there is a body of evangelical scholarship published by elite presses that cannot be ignored in our day. If the “evangelical mind” means something like excellent Christian thought leadership and scholarship that helps us work toward definitive understanding of intellectual fields, then I think there is one.

In his edifying sequel to Scandal, Jesus Christ and the Life of the Mind, Noll modifies his original thesis, pointing out essentially what I have just stated (see his postscript). But there is no monograph that actually substantiates Noll’s postscript. And I don’t know that as many people have read the more recent book as the original. In other words, I think a culture of discouragement persists among evangelicals despite our good progress. The narrative does not match the reality.

One book, by the way, that does not tackle this subject as directly but nonetheless shows that evangelicals are making a major difference in the culture is D. Michael Lindsay’s Faith in the Halls of Power (Oxford). It is a marvelous and catalyzing read.

My 2011 dissertation from Trinity Evangelical Divinity School lays groundwork for the kind of counter-narrative I’ve introduced here. I’m currently revising this work, and it is my hope that while continuing to profit from Noll’s needed polemic, we can build off of his encouraging postscript in his follow-up and chart a new course for the evangelical mind. It does exist.

January 3, 2013
Finding Law and Grace in the New Les Miserables Film
Next Post

January 5, 2013 Evangelicals Have Incredible Reasons to Engage the Life of the Mind
Recent Comments
0 | Leave a Comment
Browse Our Archives
get the latest from
Thought Life
Sign up for our newsletter
POPULAR AT PATHEOS Evangelical
1

The 2021 SBC and the Cost...
Anxious Bench
Related posts from Thought Life