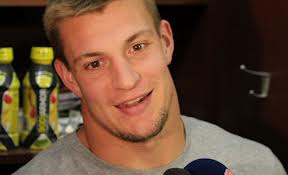 So the New England Patriots’ season ended surprisingly about a month ago as the team fell to the hated Baltimore Ravens. They did so without their tight end Rob Gronkowski, a touchdown machine.

But that’s not all “Gronk” is: he’s a world-class partier. His exploits are well-documented; he sometimes introduces himself as “Yo Soy Fiesta,” which means “I am a party.” This is a fun-loving dude, an internationally known athlete who breaks records and is paid to go to kids’ birthday parties.

He also, despite having a broken arm, body slams his buddy in a Vegas club. This video leaked and went all over ESPN’s 28 different cable channels, resulting in all the usual super-serious commentary delivered about unserious things that is ESPN’s staple.

It struck me, though, that there’s more to this story than just Gronk up to his old tricks. Rob Gronkowski is frequently interviewed, and when he is, he often refers to himself as a “kid,” and makes light of his goofy antics, as he did with Jeremy Schaap. He is young–23–and it’s no bad thing to enjoy life. That’s actually a very good thing. But Gronk strikes me as the quintessential modern boy man, a model of manhood that has found a good deal of traction today.

It’s pretty clear that this young football player thinks that rules don’t apply to him, that he doesn’t have obligations to his team, that his thirst for fun trumps other considerations (like healing his body), and that he is liberated to do whatever he wants when it comes to women. It’s interesting, because in Gronkowski and his fellow Patriot star Tom Brady, we see two modern masculine archetypes: both are football players, which our violence-loving culture exalts; both are rich, which men want to be; but where Brady has a supermodel wife, Gronk is single, with no sign of marriage anywhere in sight.

These two guys, in other words, represent two models of manhood, which overlap but diverge: Gronk is the young guy without a care, and Brady is fabulously wealthy, with three Super Bowl rings, and married to a model. But both of these men share something in common: neither are satisfied or will be satisfied by this world. My friend Brian Payne recently reminded me recently of how Brady said a few years back, “There’s gotta be more than this,” when musing for 60 Minutes on his accomplishments. We shouldn’t overlook this example for spiritual and pastoral purposes: this is one of the world’s most envied men, the guy who has it all, and he realizes that in reality he has nothing.

Gronkowski does not see this. He’s lost in indulgence and youthfulness and sin. He hasn’t reached the end of himself. He doesn’t care, in other words. He’s a role model for the twentysomething American man, the kind that has embraced a lack of responsibility and a love of childish things. He’s a boy-man, albeit one who can do basically whatever he wants to do.

This model is socially disastrous. But we’ve got to remind our people, especially our men, that this enticing model will not satisfy, and it will not meet the need of our heart to reconcile with the God we’ve offended. The young men of many evangelical churches see Gronk’s example, and struggle with its pull. They too want to shed responsibility; they too want all the best of worldly things. They want hedonism; many want to be cartoonishly tough and puffed up with muscle. They need to see, however, that all this will not free them but enslave them.

Let’s be honest: there’s an element of this way of life that will always tempt us. It’s designed by Satan to be tempting (see Proverbs 2). Guys, at least a good number of them in this country, want to be this. But it’s not good. It’s not godly. It won’t satisfy. It leads us away from the virtuous life, from self-sacrificial leadership, from love of and care for one woman, from pouring yourself into kids hungry for investment, from giving your all for God’s glory in your vocation, from serving your church so it can be healthy. In short, this model is not in accord with the gospel. The gospel puts our selfishness to death; the boy-man embraces selfishness and views it as truly living (see Isaiah 53 and Rom 3-5).

Gronk is a great football player, and a lively dude. His infectious spirit is contagious. But we’ve got to make sure as believers that we never think that his model is good or healthy. We don’t want our little boys to watch him score touchdowns and equate his life with the good life. And we don’t want our little girls to think that Gronk and the boy-men like him, who may be fun and good-looking and physically strong, are their ideal. Men like Gronk prey on women. We want our little girls to find men who will build them up, cherish them, and protect them in Christ like Christ (Ephesians 5:22-33).

We want to raise gospel-shaped men, men who live in the power of Christ’s cross and who use all their gifts and abilities to build the kingdom, not be a perpetual adolescent. This spirit has influenced many young evangelical men, and we need to show them a far better way, the way of godly men who live not for themselves, but for others.

February 13, 2013
The New Rob Bell Book Trailer and Why Truth Is What We Need
Next Post

February 15, 2013 What You Most Need Is God Himself
Browse Our Archives
get the latest updates from
Thought Life
and the Patheos
Evangelical
Channel
POPULAR AT PATHEOS Evangelical
1