Are Republicans Going to Outpace Democrats in Supporting Same-Sex Marriage? 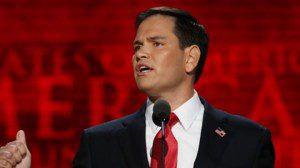 Denny Burk just offered a discomfiting commentary on the recent remarks at CPAC by GOP presidential frontrunner Marco Rubio regarding marriage. Here’s what Denny, my eagle-eyed colleague, had this to say:

I like Marco Rubio. I really do. But did you see his remarks at CPAC today? If not, you can watch above. There was a brief moment that may have gone unnoticed by many viewers and by those in attendance. It was a subtle turn of phrase that I believe indicates a pretty momentous shift on the issue of marriage. Here’s the sentence:

Just because I believe that states should have the right to define marriage in the traditional way does not make me a bigot. [at 4:40 above]

Did you see it? At first blush it sounds like a pro-traditional marriage statement. And at one level it is. I’m certain Rubio believes in traditional marriage. But at the level of public policy, he is beating a retreat. This statement implies that marriage is not a matter for the federal government to be involved in, but a matter for the states. This is no different than the libertarian approach on marriage. It allows him to be personally opposed to same-sex marriage while doing nothing to prevent it at the federal level. In essence, he is positioning himself against the 2012 GOP platform on the issue of marriage.

What does this mean? I think it means that 2012 was the last time the GOP will ever run a presidential candidate who opposes gay marriage at the level of public policy. Those days are behind us. Rubio’s remarks only confirm that.

I hope that the Republican party goes the way of the angels on this pivotal question. But I’m disconcerted by this trajectory, and I fear that Denny may be right. Can’t really say this strongly enough: few times in my young life I have more desired a prognostication to be wrong.

However this plays out, it’s been shocking to me to see GOP leaders like Rob Portman–a guy I’ve liked in the past–support same-sex marriage. I’m not a politico (at least not a compensated one), but this just stuns me. I know personal reasons play into these decisions sometimes, and there’s sometimes a significant human element in these equations.

These matters aside, let’s cut to the chase: the Republican party is sorely tested by rising cultural support of same-sex marriage. I’m a Christian. No political party determines my eternal destiny. But I would never have imagined that the Republicans would so willingly hedge on this issue or cave on it in 2013. I personally thought that the GOP would be tested on this issue, but I thought it would take a decade or so for the party’s moral foundation to give way. Good grief–even President Obama only made his announcement in May 2012 (just 10 months ago!). That felt really early, even for a figure as openly leftist as he. Now the Republican brain trust is making its own noise on the issue–this before many Democrats, which is surprising, given the relative bent of that party these days (long live the Blue Dogs).

There are lonely and hard days ahead for evangelical Christians who actually, you know, stand up and back marriage out of love of neighbor and a desire to glorify God (Mark 12:31). Here many of us were thinking we’d stand with a broad coalition for years to come. It seems that coalition is already shrinking. You know why, in part? Because, much as we love all mankind, many of us have been trained–and have embraced–emotive decision-making. It’s not the holiness of God that drives our ethical formation; it’s sentiment. Let’s just be clear here.

These are days to go deep in Scripture, hold tenaciously to the Lord, and remember that our true citizenship is not anywhere on this earth, but the kingdom of God.

March 14, 2013
Un-forgetting the Forgotten: The Legacy of Jan Huss
Next Post

March 16, 2013 Eric Metaxas at CPAC: Aren't We, Um, Glad Wilberforce's Religion Affected His Politics?
Browse Our Archives
get the latest updates from
Thought Life
and the Patheos
Evangelical
Channel
POPULAR AT PATHEOS Evangelical
1

A Letter to Christian Parents about...
Anxious Bench
Related posts from Thought Life