Brett Favre: “I think after 20 years, God only knows the toll” 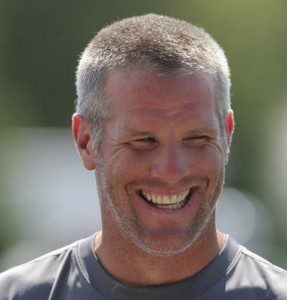 I saw these words from former NFL star Brett Favre on memory loss and concussions today. Favre was asked by the St. Louis Rams to come out of retirement at age 44 and play again. Here’s what he said in a radio interview recently:

Something is happening in the world of professional sports. Marquee athletes are holding themselves out of competition for vast amounts of time. They’re doing so, admittedly, after major injuries (I’m thinking of Rajon Rondo and Derek Rose, for example). It seems like there is the perception among top athletes that pro sports take too great a toll on the body. I don’t know if that’s true, but it’s worth noting.

Favre’s comments reflect this concern. He is clearly concerned about his mental abilities after decades playing football and taking hits (it was a concussive hit that closed out his career). Here’s my sense: I think Favre is the crest of a wave. More and more players will express fear and anxiety over their post-football lives. These are questions, as I said for Christianity Today a few weeks back, that Christians should think about.

Actually, we’ll be doing just that at Southern Seminary on this coming Tuesday, October 29th at 10pm in Heritage Hall. I’ll be part of a four-person panel debating the question “Is Football Too Violent?”. Seminary president R. Albert Mohler, Jr. will lead the discussion, which will likely be lively.

Evangelicals take few things more seriously than football, after all.

October 24, 2013
Should We Tell Our Little Girls They're "Princesses"?
Next Post

October 28, 2013 3 Things That Marriage Accomplishes
Browse Our Archives
Follow Us!

Evangelical
What Exactly Is the "Toxic" Effect of Tim...
Thought Life
TRENDING AT PATHEOS Evangelical

Who needs a bucket list? I have today.
Thus, the problem with Bucket Lists. We think that to really experience...
view all Evangelical blogs
Copyright 2008-2020, Patheos. All rights reserved.