A Banner Week for CBMW at T4G, and Scattered T4G Thoughts 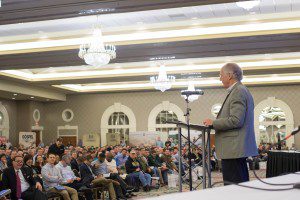 I am so thankful for last week (April 7-11), the week of the 2014 CBMW National Conference and the Together for the Gospel conference.

I have effectively come of age over the life-span of T4G, which began in 2006 in the Galt House Ballroom, the very place that we at CBMW held our NatCon. The final day of the first 2006 conference, I proposed to my now-wife. In 2010, I interviewed for the job I currently hold at T4G, meeting up with Denny Burk for a long conversation about theology and ministry. In 2014, I had the chance to be a part of the event by serving as a breakout speaker on “The Pastor as Public Theologian in an Increasingly Hostile Culture.” In sum, I love T4G and have reaped immeasurable encouragement, instruction, and gospel energy from it over all five conferences.

I was not only able to speak at T4G this year, but to hold the CBMW conference on the morning before T4G kicked off. This was a tremendous privilege. CBMW has held numerous events over the years, but this NatCon was our biggest ever, with well over 1300 seats sold (every single available seat plus several dozen extra) and many folks joining us in various capacities. Total attendance was just under 1,500 people, a stunning figure considering we were excited at the prospect of 500-600 when we truly launched our promotional efforts in January 2014. Instead of a few hundred folks in a small room, we ended up having to expand our seating two separate times. The second came just before the event due to a flood of registrations, nearly giving our friendly hotel coordinators a medical emergency in the process!

The actual event was ambitious: 8 speakers and a panel all in the span of 3.5 hours (media available in 1-2 weeks). In sum, the format was half-crazy (who thought of it, anyway?!). Each speaker had exactly 15 minutes. To our delight, each of them pulled this off. We are grateful for the theologically rich and compassionately pastoral work of (in order of appearance) Ligon Duncan, Russell Moore, Kevin DeYoung, Eric Mason, John Piper, David Platt, Al Mohler, Danny Akin, and our women’s panel featuring GraceAnna Castleberry (moderator), Trillia Newbell, Kristie Anyabwile, Melissa Kruger, Jodi Ware, and Candice Watters.

I heard more positive feedback on these messages and remarks than I could list here. CBMW gained several hundred followers and hundreds of mentions and interactions on Twitter in a few short hours and even became a nationally trending topic on the social media platform. That was unexpected, to say the least!

All told, I think the 2014 NatCon showed folks a few things:

2. We are a young movement, and as an organization, we’re serving our young, fresh-faced constituents even as we continue to deeply appreciate those who have tracked with us for decades (and they are many).

3. We are about the gospel and gospel transformation. We love the gospel. We’re invigorated by it and excited over it and what it means in our renewal as men and women of Christ.

4. We’re not giving a doctrinal inch. We’ve canceled any apology tour. And yet we’re not at all enthused or eager for controversy, battling over the splitting of theological hairs, and the endless back-and-forth that some seem to relish. As I said in point 3, we’ve got so much more to focus on, and so much thrilling work to do, that trolling and Twitter-fighting seems, well, sad in comparison.

5. We can’t wait to partner with vibrant evangelical organizations who share common convictions with us. The ministries and institutions represented by our speakers show the breadth and health of complementarianism. This movement is thriving. We’re here to keep strengthening and equipping churches to stay faithful and be fruitful.

There’s much more I could say here. In sum, I could not be more thankful to the Lord for our 2014 NatCon. It was a ton of work, and I was well assisted by CBMW employees Grant Castleberry and Brittany Lind, among others. I am so thankful for my staff. They do excellent work. I am also grateful to Mark Dever, Al Mohler, Ligon Duncan, and Matt Schmucker for having CBMW as their pre-conference partner. This meant a great deal, particularly because each of these men is a long-time friend to me.

Finally, our sponsors (see them all here) were great to work with, and we are so thankful for their partnership, too. LifeWay and Logos were our 2014 Premium Sponsors, and it was a joy to forge a friendly working relationship both groups.

There’s much more I could say, but I’ll close this part of the blog with this: We’ll see you all at the next CBMW conference. We can’t wait!

2. The evangelism stories (watch all of them here) were incredible. If all T4G had been were the videos, I would have gone home happy. Hearing how the gospel saves a person never gets old.

3. The conference speakers were very effective. After hearing the messages, I came away resolved to share the gospel more boldly and readily. T4G served its purpose for me. I’ve been mentally turning over Dever’s message on our unshakeable theistic confidence, Platt’s message on prayer, Duncan’s message on Jesus the healer, and MacArthur’s message on false conversions, among others.

4. I think you get the most out of these kind of conferences if you attend (at least) most of the sessions. There’s a natural coherence that comes when you’re not having 55 coffee appointments over three harried days.

5. The conference is extremely well run. That’s a testimony to Matt Schmucker and Paul Medler. They are a great pair.

6. T4G ’14 showed that the “celebrity pastor” criticism is overblown. Sure, there are some black SUVs around. But overall, the spirit of the conference doesn’t tip toward oohing and aahing over certain preachers. It is bent toward edification, and rather old-fashioned Word-driven edification at that. There’s basically no flash, no pomp, no super-cool-dressing-up. It’s meat-and-potatoes.

7. In a culture increasingly hostile to gospel Christianity, I actually think that events and gathering places like T4G become more important, not less. So I close on that note: I’m thoroughly thankful for T4G.

April 15, 2014
On a World in Which Little Boys Do Not Die at Marathons
Next Post

April 19, 2014 Public Engagement Does Not Mean Sneering at Jerry Falwell
Browse Our Archives
get the latest from
Thought Life
Sign up for our newsletter
POPULAR AT PATHEOS Evangelical
1

The New Lutheran Witness Blog
The Lutheran Witness, the magazine of the LCMS, has a new internet...
view all Evangelical blogs
Copyright 2008-2020, Patheos. All rights reserved.