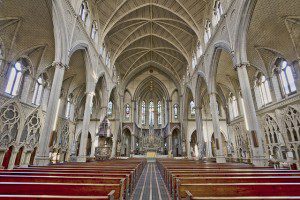 I recently read your comments, made to Oprah, about the church being “moments away” from affirming gay marriage. Here are your remarks as reported on one website:

That statement prompted a question from Oprah: “When is the church going to get that?”

“We’re moments away,” Rob Bell said. “I think culture is already there and the church will continue to be even more irrelevant when it quotes letters from 2,000 years ago as their best defense, when you have in front of you flesh-and-blood people who are your brothers and sisters and aunts and uncles and co-workers and neighbors and they love each other and just want to go through life with someone.”

Rob, you’re a gifted communicator. You drew many folks to your church in Michigan, and now you have a show on Oprah’s network. It’s clear that you’re charismatic, funny, and adept at making complex realities simple to understand.

But–excuse my own attempt at brevity–you’re dead wrong on the church and gay marriage. The church isn’t giving an inch on this issue. Sure, there are scattered congregations who are moving in this direction. But in terms of tens and tens of thousands of local churches from a wide array of denominations filled with people of all races and backgrounds who simply love God’s inerrant Word, we aren’t moving an inch. We’re not scared; we’re not intimidated; we’re not even impressed. We’ve seen this all before.

As you note, the culture has moved with great swiftness on this issue. There appears to be no moral check to this momentum in broader cultural life. It is not so with the church. The church has a mighty backstop, an iron wall, a living Lord. It has a foundation for its ethics and morals. The church has a moral imagination inspired by the holy prophets and the blood-dripping apostles and a crucified Lord. The church is a counter-culture that speaks truth.

The culture has no such foundation. It chases such virtues as liberty and equality, but without warrant, and without guidance. It speaks of rights, but it has no grounding for them. It hungers for justice, but has no buttress for it. This is not a new movement; it’s an old and tired one. Ask the Jacobins how their Revolution played out. Even Napoleon realized that went poorly. Ask the Russians under statism how freedom fared. You don’t need to write The Gulag Archipelago to see that secularism of varying kinds fails to make good on its promises.

Rob, you’re absolutely right that the culture wants the church to give up. Alongside a shrinking number of mostly religious partners, we’re the last holdout in the West. With a pat on the head, we’re assured that we can keep feeling precious spiritual thoughts in our hearts. We can pray nice little prayers in our closets. We can be good sanctified boys and girls in our own weird-smelling sanctuaries. But to live out our convictions? To bring them into the public square? To be salt and light? The culture shudders at the thought.

(Even as it acts on its own convictions and brings them into the public square).

The strange thing here is that you used to understand this. You used to be a voice for the people of exile. You used to preach the Bible, and people loved your ministry. You stood with God against the world. But now, as it pains many of us to see, you stand with the world against God.

That is your own prerogative. I give you credit for being clear with your views, and it’s apparent that you have not lost your communicative skills. People still thrill to hear you teach, and–speaking from one teacher to another–you make very fine use of a blackboard, I must say. But you no longer speak sound words. I tried hard to understand “zimzum,” but I can’t seem to pin it down, bro.

Christians have often, for the good of the world, had to stand against the world. In America, for a brief and shining moment, we–and many others–have enjoyed spectacular amounts of religious liberty. But that may yet change. If so, we will only be walking in ancient paths. But here is the remarkable thing, Rob. Unlike the culture, we don’t hate and silence those who oppose us. We take ideas seriously, of course. But if we are hated for the truth, we react with love.

Gays, lesbians, transgender people, heterosexual adulterers, atheists, white-lie tellers, good-churchgoers-without-a-shred-of-grace–any and all people who have issue with the hard words of Scripture–these are not our enemies. We love such people. We have a foundation for human dignity, the imago dei (Gen. 1:26-27). We see beauty in every person. We see potential, infinite potential, in every sinner born evil just like us.

We do not offer them, however, a harmless gospel. This is what the culture demands of us, but we cannot acquiesce. The message of Jesus Christ is not a self-affirming message. It is a call to death. It is a summons to submission. It means that we lose all our sin and gain all of Christ. We open the Bible, and we see a cross on every page. That’s the emblem of Holy Scripture. Crucifixion. Suffering. Death. But then, and only then: Life. Resurrection. Eternity.

Rob, I hope that you will return to these things. I know you still sometimes celebrate communion with your friends. The old imagery still speaks. The body and blood are for sinners like you and me. They ever will be, even if church buildings go vacant, the nurseries go silent, and the pulpit lies empty. The body and blood remain, even if the jails swell with preachers and the unemployment lines teem with convictional Christians. No matter.

At the end of the day, when it comes to marriage and biblical ethics, the church is not giving an inch. We laugh at Satan and his attempts to intimidate us. He does not realize that we do not even love our own lives. Should all the world turn against us, we gladly give up all that we have for Christ.

No, the church will not give an inch. But know this: God is giving everything, even the overflow of Trinitarian love, to sinners just like you and me.

March 3, 2015
Is it Wrong for Christians to Make Lots of Money?
Next Post

March 11, 2015 The Lesbian Who Became a Complementarian
Recent Comments
0 | Leave a Comment
Browse Our Archives
Related posts from Thought Life