Ill be the first one to admit the first time I had heard the term Critical Race Theory was within the last twelve months. I began to hear about it from reading news from the Southern Baptist Convention. At first, I thought it was some sort of doctrinal stance within the SBC denomination, but I quickly realized its scope as well as its reception is much larger than one denomination. So I went out on google scholar to get an understanding of CRT. What I found wasn’t as surprising as the visceral reactions to the theory. This is what I found.

According to Encyclopedia Britannica Critical race theory is “the view that the law and legal institutions are inherently racist and that race itself, instead of being biologically grounded and natural, is a socially constructed concept that is used by white people to further their economic and political interests at the expense of people of color. According to the theory, racial inequality emerges from the social, economic, and legal differences. White people create this between “races” to maintain elite white interests in labor markets and politics, giving rise to poverty and criminality in many minority communities.” The CRT movement officially organized itself in 1989. At the first annual Workshop on Critical Race Theory that year. Its intellectual origins go back much further to the 1960s and ’70s.

It is no secret from my writings that I am of the opinion that legal institutions are biased. My view of this fact comes not from the form of race but from the form of wealth in this country. My opinion is that those in power with wealth do in fact stack the political, judicial and economic cards against those who are not wealthy. I stated in my Death Penalty post that there are two tiers of people in this country; those who make 350k a year or more and everyone else.

I must admit this view is in part, because I have never been discriminated against for my skin tone, only for my financial standing. But because I have seen personally in my life people being treated differently for their skin tone, Its not far fetched for me to see legal institutions in this light. I would also point to the fact that there are far more members of the 350 club that are white in the United States. Because of this fact, most persons of color fall in the lower tier along with me and many of you. From that perspective I can understand why the theory states this hypothesis in regard to race. Shear numbers. And numbers do not lie.

“Race Itself, Instead of Being Biologically Grounded and Natural, is a Socially Constructed Concept”

In his 1995 book “How the Irish Became White” Noel Ignatiev states “No biologist has ever been able to provide a satisfactory definition of race”. (Ignatiev, 1995) This is because the only race humans belong to is the human race. The color of a person’s skin is simply not enough of a marker to dictate a different grouping of humans. All humans belong to the human race. This portion of the the theory should be universally accepted as the scientific fact it is. The white race is a social construct as well as the black race or the native race.

What is different is culture… and skin tone. Its also a historical fact that European cultures up to this point in history have in fact imposed their culture on other cultures. This has occurred from India to the United States and Africa. This reality is a fact that cannot be ignored in history. So, I would submit that race is not a biological or natural process for splitting up humans. It is a social structure, and it is a historical fact that Euro-centric culture has been dominant on earth for at least 1500 years.

It is likely this part of the theory where those described as “white” likely have an issue with this theory. I know because even I have to admit that it stings to hear. And my first reaction is to immediately respond “I don’t believe that”. And although true, to be honest in the study of this theory I cannot simply shrug it off. History will inform us that even in the best light, from 1619 until 1865, African peoples in the United States were property.

We cannot delude ourselves in saying The United States was founded for all people. So it would also be fair to say that many of the institutions of the United States came from this era. Because of this, their beginnings saw classes of people based on color. We also cannot ignore, at the least, the country maintained this class system. That system was based on color until at least 1968. Its not unfair to say equality of all in the human race is a fairly new experiment in our nation. So, at a minimum, institutions in the United States have a 350 year history of the social construct of race being used to further a Euro-Centric culture. I think it immature to believe a nations institutions have completely changed 350 years of precedent in 52 years.

This is likely the only place I take issue with this theory, but not for the reasons one might think. I would submit these differences were created in the past and have never been truly addressed and rectified. There are many white Americans who understand that not everyone is treated the same in this country. They understand that if a family is generationally poor or abused, it will likely stay in that state unless affected by change. So I would argue yes, racial inequality in the present is a direct result of social, economic and legal differences that were created and never addressed. What this theory gets right in my opinion is what is occurring now. A white author attempting to understand a theory where he is not negatively affected is exactly what the doctor ordered.

Celtic Spirituality hangs its at, so to speak, on the idea that God is present in everything and therefore everything is to be respected as such. Further, the Human Race is the pinnacle of God’s creation, because it is in us where the image of God is seen on Earth. If we treat people different because of made up social constructs, we sin. If we become aware of such constructs, and do nothing, we sin. God is to be found in African culture as much as Celtic culture. We should strive to treat both the same. To me, considering my Celtic Spirituality and view, CRT is a theory that is necessary to open up honest conversation about the realities of non-white people in The United States.

It can be painful to hear, especially if you are like me and strive very hard toward total equality. You may feel attacked. This is likely not the case. Because if you are reading this it is likely you are also in the group that makes less than 350k. And even though you are white, you are not afforded privilege’s of the economic elite. I see the system as affecting poor whites, and then doubly affecting African, Hispanic and Native communities. The reality is, most people have a vested interest in the goals of CRT.

I see CRT as a way to recognize the sinful disease of our past. And to actually recognize and takes steps to eradicate the disease of racism in institutions. Even though I acknowledge that this country was not founded with all humans in mind, we can do better. We can reimagine and apply those once divisive words to create a true “more perfect union”. Therefore I welcome CRT as a way to dialogue. A way to understand image bearers who don’t look like me, and have suffered differently. This is not dangerous to Christianity, this is necessary. 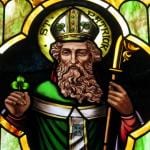 March 17, 2021
Saint Patrick- The Man Who Saved Irish Culture from Christianity
Next Post

March 20, 2021 The Carmina Gadelica Series: Morning Prayer
Recent Comments
2 Comments | Leave a Comment
Browse Our Archives
get the latest from
Thoughts of a Modern Celtic Wanderer
Sign up for our newsletter
POPULAR AT PATHEOS Progressive Christian
1

Jesus, Ascension Day, and the Olympics
It is a reminder of the world we have been living in...
view all Progressive Christian blogs
What Are Your Thoughts?leave a comment

2 responses to “A Wandering Celtics View on Critical Race Theory”