Eunuchs have unfortunately become another attempted Biblical argument in favor of rewriting the Bible’s sexual ethic. The argument has been around for years, based on the story of the Ethiopian eunuch who comes to Christ in Acts 8:26-39.

It is sad to hear a passage that celebrates the first messenger of the Gospel to Africa, turned into a claim that the story was all about the sexual status of the Ethiopian official. Since this passage played a key role in convincing Arlo Duba, professor at Dubuque Seminary, to change his mind on homosexuality (see https://pres-outlook.org/2011/01/arlo-duba-interview/), this passage merits further discussion.

The Hebrew word sarīs can mean both “royal official” and “eunuch.” The word is used of Potiphar, Joseph’s Egyptian master in Genesis 39. Despite the fact that Potiphar’s wife appears there as a sex-starved “Desperate Housewife,” we have no reason to believe that her husband had been rendered incapable of normal marital relations.

The Hebrew term in question comes from Akkadian, the language of the Assyrians and Babylonians, where it may be seen even in the title Rab-Saris (chief official) in 2 Kings 18:17 and Jeremiah 39:3. There is no hint of emasculation in the term, but large numbers of royal servants were subjected to this procedure, although this is less likely in the few examples of sarīsīm cited in Israel (1 Samuel 8:15, 1 Kings 22:9, 2 Kings 24:15, and Ebed-Melech the Ethiopian in Jeremiah 38:7). Daniel and his three friends may have been emasculated as a condition of their service to the Babylonian king.

It is true that as a literal eunuchos, the Ethiopian official in Acts 8 would not have been able to go any further into the Temple than the Court of the Gentiles. However, unless he had converted to Judaism, he would not have been able to enter any further than that point, anyway. And the Mishnah (Yebamoth 8:1) states that if a priest has suffered the injury or loss of his genitals, he is still allowed to eat the holy offerings; he simply is not allowed to enter “the Assembly” (it is unclear whether this means only the Temple, or may also apply to the local synagogue).

The rabbis in the Mishnah (first two centuries AD) do not make eunuchs out to be evil people, and actually say very little about them. They make much less of an issue out of the eunuch’s sexual status than today’s defenders of the gay agenda, who wish to overstate the evidence by making the eunuch into a symbol for those who practice same-gender sexual intimacy.

Even though eunuchs were emasculated to prevent misconduct with women, they were still often stigmatized as immoral because of the belief that they were sexually active with their own gender. That is precisely why Deuteronomy 23:1 keeps them out of the sanctuary: because the vast majority of eunuchs in the Late Bronze Age and Iron Age I were made, not for government service, but for cultic male prostitution. The Mosaic prohibition no doubt was more sweeping than necessary, but is comparable to today’s prohibitions on who can donate blood. Who can enter God’s sanctuary was just as serious an issue.

So, is this a case where God commands a change in his own law? I would argue that God already announced such a change in Isaiah 56:4-5. God doesn’t explicitly say, “OK, you can come into the Temple now,” but God declares in this passage that eunuchs who keep the Sabbath and “choose the things that please me and hold fast my covenant” will receive “in my house and within my walls a monument and a name better than sons and daughters.” They will receive “an everlasting name that shall not be cut off.”

As I have argued in my book What’s on God’s Sin List for Today?, when God reaffirms an Old Testament command in the New Testament, and/or places a death penalty on the offense, these are signs that this is a moral principle that is timeless and universal. Deuteronomy 23:1 meets neither of these criteria. In fact, Acts 8:26-40 is there to explicitly reverse God’s previous command. When the eunuch asks, “Is there anything that prevents me from being baptized?,” the answer is, “Nothing!” By contrast, homosexual behavior both carries a death penalty and is reaffirmed on the New Testament sin lists in 1 Corinthians 6:9-11, 1 Timothy 1:9-11, and arguably on Jesus’ sin list in Mark 7:21-23 under the term aselgeia, translated as “licentiousness” (see my article “Aselgeia in Mark 7:22,” https://www.bsw.org/filologia-neotestamentaria/vol-21-2008/in-mark-7-22/523/).

There are no legitimate grounds for equating the issue of being a eunuch with the issue of same-gender sexual activity. For Jesus in Matthew 19:10-12, being a eunuch means nothing more or less than sexual abstinence (for both genders, presumably, based on how Jesus makes his argument in this passage). Jesus says that some abstain because they were born without the means to participate in sexual intercourse, some were artificially deprived of that ability, and some choose not to participate for reasons related to their devotion to God.

Jesus in effect agrees with the words of his disciples that it may be better not to marry at all. How does that fit with God’s words in the Garden, “It is not good for the human to be alone”? The bottom line is that Jesus affirms both: sexual abstinence, and lifelong faithful marriage between a man and a woman. But Jesus neither blesses nor endorses any third option.

Acts 8:26-40 is a wonderful account of an African royal treasurer who takes several months off from his job to travel 900 miles to seek the God of Israel. He even purchases an expensive personal copy of the Septuagint. Here is a man who fulfills Isaiah’s 700-year-old prophecy that worshippers will come to Jerusalem “from beyond the rivers of Sudan…from a nation tall and smooth…whose land the rivers divide” (Isaiah 18:1-7). He becomes the firstfruits of the Gospel in Africa. Let’s leave the account the way that Luke intended it to be read. 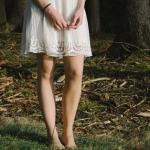