Does God Do Bad? Depends on What You Mean

Does God do “bad?” It depends on what you mean by “bad.” The Bible teaches that God does not do what we would call moral evil. But yet at the same time, the Bible does teach that God makes stuff happen that we would call “bad” in a broad sense. When talking about a subject like this, language is everything.

The Bible has several specific words for moral evil. They include the Hebrew words resha‘ (wickedness), pesha‘ (transgression), ‘awon and ‘awen (iniquity), and ḥaṭa’ (sin), along with the Greek word poneros (evil). However, Hebrew also has a broad word ra‘ that means “bad,” roughly parallel to the Greek word kakos. Ra‘ can mean “bad behavior” or “evil.” But ra‘ can also mean bad events or times that have nothing to do with the morality of any behavior. Let’s take a look at some revealing examples of how this common but multifaceted Hebrew word for “bad” can be used.

The meaning “evil” fits the majority of the 310 uses of the noun ra‘, starting with its debut in Genesis 2:9 with the tree of the knowledge of good and “bad.” “Knowing good and bad” was the temptation made by the serpent that led to the moral fall of humankind (Genesis 3:5). God sees that the thinking of the human heart in Noah’s day was “only evil continually” (Genesis 6:5), and even after the flood, God declares that the inclination of the human heart is “evil” from their youth (Genesis 8:21).

Job is described as a man who “feared God and turned away from evil” (Job 1:1, 1:8, 2:3). Seven times we are told that Israel relapsed and “did evil” in the book of Judges. Twenty-seven kings are said to have done “evil” in the sight of the Lord. David confesses that he has done “evil” in Psalm 51:4. And in Genesis 13:13, we are told that the men of Sodom were “wicked,” which is then further explained as “major-league sinners against YHWH.”

Bad can even mean “sad” in verses like Nehemiah 2:2, where the Persian king asks Nehemiah, “Why is your face bad?” The Greek translation reads “evil,” but the Latin renders it “sad.” Ecclesiastes 1:13 says, “It is an unhappy business God has given to humans to be busy with.” Ecclesiastes 7:3 says, “By sadness of face the heart is made glad.” Ecclesiastes 8:9 says, “One rules over another, to the other’s hurt.” Proverbs 25:20 speaks of “one who sings songs to a heavy heart.” And in Genesis 40:7, Joseph asks his fellow prisoners, “Why are your faces bad (= sad)?”

A number of the uses of the word “bad” are expressions of opinion. In Genesis 24:50, Laban cannot say whether the marriage deal for his sister Rebecca is “bad or good.” In Genesis 28:8, we have the first example where “bad in the eyes of” means “not pleasing;” here we have the verb form “to be bad,” which is used 105 times in the Hebrew Bible. When God had mercy on Nineveh, it was “displeasing” to Jonah (Jonah 4:1). Likewise, “it was bad” to Abraham when Sarah tells him to cast out Hagar (Genesis 21:11). “It was bad” to Samuel when the people demanded a king (1 Samuel 8:6). And Joshua says to the people, “If it seems evil to you to serve YHWH, choose you this day whom you will serve” (Joshua 24:15). All of these examples seem to involve expressions of opinion on what is pleasing or not, rather than strict moral verdicts.

But which is which is not always clear. It is surprising that 2 Samuel 11:27 simply says that David’s adultery and cover-up murder “was bad in the eyes of YHWH” rather than using stronger, unambiguous language. What Onan did in Genesis 38:9-10 was also “bad” in the eyes of YHWH, but the moral issue seems to be why he did it, to deprive his brother of offspring, which was apparently “bad” enough for God to permanently strike him down.

Habakkuk 1:13 declares that God’s eyes are “too pure to behold evil (ra‘),” and Zephaniah 3:5 says that the Lord “does no wrong (‘awelah).” But God does bring bad occurrences that are not morally evil and that are not inconsistent with God’s character. God declares in Isaiah 45:7, “I make shalom (well-being), and I create ra‘ (harm).” Job asks his wife, “Shall we receive good from the Lord, and not receive bad?” (Job 2:10) Elijah prays, “O Lord my God, have you brought bad upon this widow?” (1 Kings 17:20) In Ruth 1:21, Naomi laments that the Almighty has “brought bad” upon her. In Numbers 11:11, faced with a rebellion, Moses asks God, “Why have you done bad to your servant?” And Joshua warns Israel that if they renege on their covenant, God will “do you harm” (Joshua 24:20).

Think about the implications of all these translation options to a familiar verse like Psalm 23:4 – “I will fear no bad.”  We can take these words as confidence not merely in the face of attack by evil, but by any form of bad.

The broad range of meaning for this generic Hebrew word “bad” (ra‘) should lead us to exercise caution when we run into the word “evil” in our Bibles. If you have Strong’s or Young’s concordance, check and see whether the generic word is being used, or a specific word for what we would call moral evil. God does not do moral evil, but God can unleash “bad,” which may be consequences for sin, but may be simply part of the brokenness of the created world cursed by human sin.

And God gives us a vision in Revelation 21:1-5 of a future world where “bad” shall exist no more, in any of its forms. 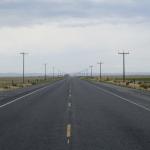 March 8, 2018 What Is Right? Life on the Straight and Level
Browse Our Archives
get the latest from
Evangelical
Sign up for our newsletter
POPULAR AT PATHEOS Evangelical
1

How the Loss of Family &...
Cranach
Books by This Author Books by Tom Hobson