Yes, that headline will strike some of you as earthshattering as this:

For it seems that Jürgen Moltmann comes out with a new volume about as often as the phone book.  However, for some of us, a new book by Moltmann is a pretty big deal.

Moltmann’s latest, published last year in German and this year in English, is titled, Sun of Righteousness, ARISE! God’s Future for Humanity and the Earth.  I’m just reading it now as I’m writing chapter four of my dissertation, in which I will use Moltmann’s ecclesiology as an affirmation and critique of the emergent/-ing church.

Moltmann hasn’t written a great deal about ecclesiology since The Church in the Power of the Spirit in 1975.  While it can be argued that his ecclesiology lies latent in all of his subsequent writings, his pragmatic volumes have been more interested in science, secularism, and political theology than in the workings of the church.  So I’m particularly interested to read, right up front, when Moltmann writes,

My theses in this essay can be reduced to simple formulas:

That first thesis is one with which many of my friends would disagree, and depending on which side of the bed I woke up on, I might, too.  He then begins chapter two, “The Rebirth of the Church,” with a paragraph with which we would all agree, and which might be seen as concomitant with the birth of the emergent movement:

The great event of the twentieth century was the end of Christendom, the Christian era and the Christian nations, and the beginning of the church’s rebirth as an independent and resisting community, a community with a universal mission and an all-embracing hope for the kingdom of God as the future of the world.

He goes on to write about the three potential paradigms for the church as we enter the “millennium of the Holy Spirit.”  But you’ll have to purchase the book yourself — or wait for my dissertation! — to see what those are.

The rest of the book is similarly collected essays and thoughts by a still sharp and active mind at the tale end of one of the most influential theological careers of the last 100 years.  Even if you’re not a Moltmanniac like me, I recommend this book to you.  In short, digestible essays, Moltmann weighs in on science, the Trinity, Psalm 82, monotheism, and more.

Read it, and you, too, might become a Moltmanniac. 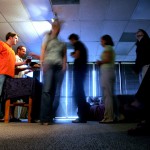 October 6, 2010
When Communion Is Political (Hint: It's Always Political)
Next Post

Evangelicals, you have some denouncing to...
Grace-Colored Glasses
Related posts from Theoblogy