Why Is Moorohler Nervous? Because Evangelicals Are Embracing Gay Marriage

The evangelical intelligentsia is very, very nervous. That’s because opposition to same sex marriage is crumbling among the generations that will be running evangelicalism in coming years. Yesterday, we saw Moorholer attacking a couple younger evangelicals who had the gall to question Arizona’s anti-gay, pro-discrimination legislation. But as the new survey out this week from PRRI shows conclusively, evangelical opinions about gay marriage are shifting very quickly among those under 40.

Here are some other findings of the survey:

I’ve had several evangelical leaders in private tell me that they know they’re going to lose this one, but they’re going to go down swinging. The sad part is that their unwillingness to admit defeat will end up tearing apart the institutions that they’ve spent their lives building. 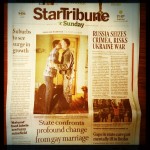