Part 2: A Brief History of Time or Does Anybody Really Know What Time It Is? Or Ain’t Nobody Got Time For Dat or Throw Out Your Digital Watch or Live in the Now

Part 2 of a two-part series with unnecessarily long titles on time. 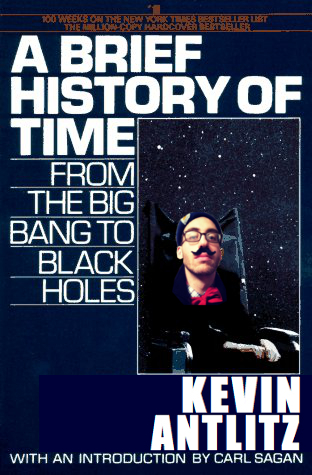 This post is loosely connected to a previous post on time, its limits and consequently how we ought to spend it. In addition to the limits of my brain capacity, I simply haven’t got the time (pun intended) for tackling anything comprehensive about time. I have more questions than answers on the subject, but here are a few humble pensées on time.

In his A Brief History of Time, Stephen Hawking argues that “the laws of science do not distinguish between the past and the future.”1 What he means by this is that, objectively and under the normal conditions of the universe, the laws governing the behavior of matter remain unchanged in the operations of the universe. Hawking distinguishes between “imaginary” time and “real” time. In imaginary time, there is no direction with reference to time whereas in real time (time as we experience it) “there is a big difference between the forward and backward directions of real time in ordinary life.”2

Hawking identifies three “arrows of time,” which are things that differentiates the past from the future, giving the sense of direction to time including the thermodynamic arrow (entropy), the psychological arrow, and the cosmological arrow (universe is expanding).3 The second arrow, the psychological one, is the most subjective and the interesting to me and so I want to explore this, especially in relation to Pascal. This is one of my favorite passages from Pascal’s Pensées (French for “thoughts”):

We never keep to the present. We recall the past; we anticipate the future as if we found it too slow in coming and were trying to hurry it up, or we recall the past as if to stay its too rapid flight. We are so unwise that we wander about in times that do not belong to us, and do not think of the only one that does; so vain that we dream of times that are not and blindly flee the only one that is. The fact is that the present usually hurts. We thrust it out of sight because it distresses us, and if we find it enjoyable, we are sorry to see it slip away. We try to give it the support of the future, and think how we are going to arrange things over which we have no control for a time we can never be sure of reaching.

Let each one of us examine his thoughts; he will find them wholly concerned with the past or the future. We almost never think of the present, and if we do think of it, it is only to see what light it throws on our plans for the future. The present is never our end, the past and present are our means, the future alone our end. Thus we never actually live, but hope to live, and since we are always planning how to be happy, it is inevitable that we should never be so.4

This hit me like a ton of bricks when I first read it a few years back while in seminary. The natural orientation for a student is to set your face to the future. School is not an end in itself but is a means to an end; a launching pad to shape you into the person who can get to where you want to go. As Pascal points out, it’s difficult to break from this future focus.

Pascal is bringing down the hammer on humanity because we perpetually evade the present. We unwisely wander in the past, blindly flee the present to chase after the vain dream that is the future – the things for which there is no guarantee of reaching. Granted, if it is indeed true that the future alone is our end and never actually live but only hope to live, it seems that it’s true that we should never be happy.

When I first read this, I identified myself as guilty, complicit in this plight of humanity flight from the present. However, when I read this now, I’m not so sure. It seems to me that Pascal draws too sharp a distinction between past, present, and future such that there is a clear demarcation between the time that was, the time that is, and the time that shall be. It’s almost as if the present for Pascal is a more elongated period of time, which seems to be the only way this would make sense.

The more I think about time, the more I think the past, present, and future are less distinct and flow together. See the diagram below. The diagram resembles an hourglass turned over on its side. The diagram is obviously insufficient in capturing the full essence of time but I think it depicts our perspective of the flow of time. It fails to capture how we move forward in time (i.e. how what we do in the present affects our future). Our relation to time is complex (and this is a diagram made in Word for Mac – what do you expect?). 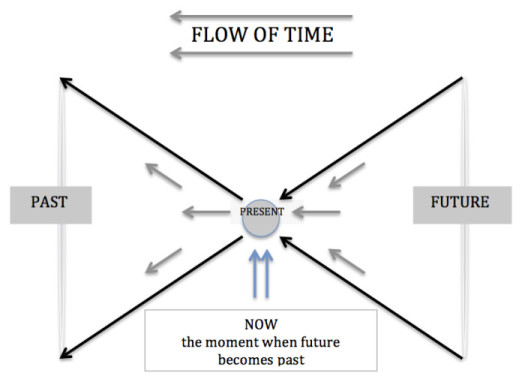 In any case, what I think the diagram shows is that the present moment is fleeting. Now becomes then exactly when the future becomes now and so on and so forth. I don’t understand the present. The present moment is ephemeral but it’s also constant. It’s always here but always changing. In other words, it seems impossible to draw such a hard line between the past, the present, and the future. It’s as if the instant after we are cognizant of any given moment in time, it’s a memory. Which is to say, I’m not exactly sure how it is that I perceive the present because as soon as I perceive it, it’s not the present. Chicago’s song “Does Anybody Really Know What Time It Is?” is starting to make a little sense now.

In his insightful article “Time’s Face, Time’s Digits” in the Boston Globe, James Carroll highlights how “our two kinds of clocks give us two kinds of time.”5 Carroll, the former Catholic priest currently serving as the professor at Suffolk University and regular columnist for the Globe, points out how the analog clock tells time as a continuity, where one moment is connected to and flows into the next. And so, “the face of the clock knows no separation in the values of time, but instead displays a moving picture of the past forever drifting into the present and on into the future.”6 [Unlike my diagram, this analogy captures how we move forward in time]. The digital clock, on the other hand, is remarkably different from the old-fashioned way of reading time. Unlike the continuity of second to second by the hands on a watch face, the numbers on the screen “remain static until a shift occurs…Periodically, the numbers jump. Time is not continuous, but episodic. The digital clock renders a perennial present, effectively denying the existence of the past and the future. As its numbers exist not in relationship but in themselves alone, so the present exists not in context of what precedes or follows, but in itself. Now and now alone.” Fascinating.

Carroll’s angle is to point out how the reduction of time to numerical value necessarily leads to a reduction of meaning and shapes the narrative imagination in detrimental ways. Apart from it being an excellent article, my particular point in referencing it is to simply highlight the continuity of time such that it’s hard to draw a hard line in its flow.

Still, I think Pascal’s thoughts are timely and can serve a noble purpose if it awakens us to the gift of our present moment in time. It is indeed possible to live entirely in the past or future and, if we’re not guilty of the one or the other, it’s likely we know someone who is. And so, as my fortune cookie from dinner tonight reads: “Value your present moments.” Or, as Wayne Campbell once exhorted, I too suggest that we ought to “Live in the now.” After all, we have no other time in which to live.

If you missed it, you can read Part 1 of this two-part series with unnecessarily long titles here: Memento Mori.

Evangelical
Advent: What It Is & Why You Need...
Transcendentalish

Evangelical
Should all Christians be vegetarians? Pt. 4: On...
Transcendentalish
TRENDING AT PATHEOS Evangelical