On cause mieux quand on ne dit pas causons OR Why Our Pursuit of Happiness is Making Us Miserable October 28, 2016 Kevin Antlitz

From its very foundation, the American imagination was formed by the so-called inalienable right to the pursuit of happiness. This hallmark of what it means to be an American has evolved over the years but this evolution is not synonymous with progress. The pursuit of happiness has mutated into our national obsession with the end result of making us quite unhappy.

Perhaps ironically, we Americans should heed the wisdom of two Brits who highlight the doomed-to-fail-project of the American obsession with happiness. These two Brits are the contemporary journalist, Ruth Whippman, and the late Oxford don, C.S. Lewis. Each highlights the same paradox of the human condition which may actually solve our happiness problem.

In her new book called America the Anxious: How Our Pursuit of Happiness is Creating a Nation of Nervous Wrecks, Ruth Whippman pokes holes in the American obsession with happiness. Whippman is a British transplant that moved to the Golden State. Consequently, she is relatively unfamiliar with exclamation points, sunny days and the incessant preoccupation with the great American ideal – happiness. This makes her outsider’s perspective particularly insightful (not to mention a bit curmudgeonly and moderately hilarious).

The central thesis of America the Anxious is that our quest for happiness suffers from a fatal paradox. Our hunt for happiness is actually making us all hungrier for it. Whippman brings this out clearly when she interacts with the findings from a study published by psychologists from the University of California at Berkeley. The authors of these studies on levels of happiness “concluded that paradoxically, the more people valued and were encouraged to value happiness as a separate life goal, the less happy they were. Like an attractive man, it seems the more actively happiness is pursued, the more it refuses to call and starts to avoid you at parties.” Our pursuit of happiness is what is responsible for making us miserable. The more we pursue it, the more it evades us.

Half a century ago, Oxford don C.S. Lewis made essentially the same observation about this phenomenon. In his essay “First and Second Things,” Lewis explains how he stumbled upon this remarkable paradox, “a paradox which turns up so often that man ought by now to be accustomed to it.” His elucidation of the paradox is worth quoting at length. He writes:

The longer I looked into it the more I came to suspect that I was perceiving a universal law. On cause mieux quand on ne dit pas causons. [One converses better when one does not say, “Let us converse.”] The woman who makes a dog the centre of her life loses, in the end, not only her human usefulness and dignity but even the proper pleasure of dog-keeping. The man who makes alcohol his chief good loses not only his job but his palate and all power of enjoying the earlier (and only pleasurable) levels of intoxication. It is a glorious thing to feel for a moment or two that the whole meaning of the universe is summed up in one woman – glorious so long as other duties and pleasures keep tearing you away from her. But clear the decks and so arrange your life (it is sometimes feasible) that you will have nothing to do buy contemplate her, and what happens? Of course this law has been discovered before, but it will stand re-discovery. It may be stated as follows: every preference of a small good to great, or a partial good to a total good, involves the loss of the small or partial good for which the sacrifice was made.

Both Whippman and Lewis getting at a central truth of the human condition. If we fix our sights on the wrong target, it’s inevitable that we should miss the right one every time. Put differently, if we put the weight of life’s greatest longings on structures that are not designed to bear it, they will be crushed by the pressure, taking us down with them. The pursuit of happiness simply cannot handle our weight.

It is, as Lewis notes, a universal law. If we make the pursuit of happiness our chief end, we shall be miserable. And this ought to come as no surprise because every system is perfectly designed to generate the results it produces.

Now, the point in all of this is not to knock happiness. The point is that we were not meant to value happiness as our summum bonum. When we make happiness ultimate, when we make happiness the telos of our existence, we are all but guaranteeing that we shall not be so. As Lewis puts it, “by valuing too highly a real, but subordinate good, we have come near to losing that good itself.” I’m not saying we are not meant to be happy. I am saying that happiness is a by-product, a second-order good, a natural result of putting first things first.

This isn’t a religious truth. As the not particularly religious Whippman discovered, this is just way things are. This paradox seems to be woven into the fabric of the universe. Again to quote Lewis: “Apparently the world is made that way. If Esau really go the pottage in return for his birthright, then Esau was a lucky exception. You can’t get second things by putting them first; you can get second things only by putting first things first. From which it would follow that the question, What things are first? is of concern not only to philosophers but to everyone.”

October 17, 2016
Eugene Peterson on Whether We're Tourists or Pilgrims
Next Post 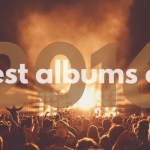 December 24, 2016 Top 10 Albums of 2016
Recent Comments
1 Comment | Leave a Comment
"Now I would add Rob Dalrymple's recently posted on Patheos -- put in a way ..."
tovlogos Resource for Prayer and Fasting in ..."
"There is a doctor who is a believer, Joseph Mercola who has much to say ..."
tovlogos Resource for Prayer and Fasting in ..."
"Kevin absolutely solid thinking. "Take the church’s activism against abortion, as an obvious example. Fighting ..."
tovlogos Resource for Prayer and Fasting in ..."
"The Kierkegaard quote is from For Self Examination, p.47 in Hong translation."
Sean McDonough Review: Philip Gröning’s Into Great Silence ..."
Browse Our Archives
get the latest from
Transcendentalish
Sign up for our newsletter
POPULAR AT PATHEOS Evangelical
1