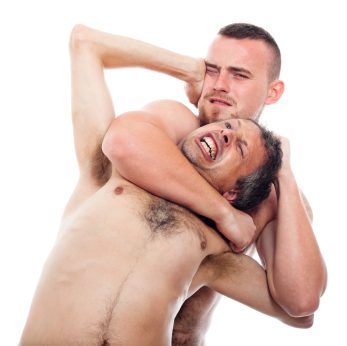 I watched Fight Club the other night. It took me several tries to sit down and watch it all the way through. It’s not the easiest film to watch, but it is one of those movies that will be difficult to forget any time soon. Moreover, the story so encapsulates the traumatic experiences of a significant number of men in our society; so long after the memories of scenes from the movie have faded, I will have instant recall of lives in pain as violence committed against others rages on in our culture.

I won’t go into it all now, but I do hope to reflect upon the movie further in various ways in future posts. Here are my immediate musings.

A young unnamed man we’ll call “Jack” (played by Edward Norton) can’t come to terms with having been raised without a dad. His dad split when he was a child and set up franchises of bedding wives and producing kids in various places, causing the same relational wounds the size of a man wherever he went.

In the effort to come to terms with his pain and the loss of a childhood and failure to become a man, Jack takes to fighting. He starts a fight club that evolves and grows and goes nationwide. In the movie, men like Jack die and rise again every night as they beat on one another. They can identify and locate their pain as it sears their bloodied and bruised bodies. They are not seeking to medicate their pain or eradicate it, but identify with one another in experiencing the pain of the depression that is their purposeless lives. Such men know hedonism won’t save them; it’s simply the other side of the nihilism that’s closing in to write them off. So they fight; perhaps through chaos comes order. Then again, perhaps not.

As profoundly disturbing as Fight Club is, it speaks to the need for people to share their pain with others. While there are no doubt many significant ways that men can grieve the apparent loss of their manhood rather than pour out violence on spouses and children, among others, coming together to listen to one another grieve serves to heal old wounds. Such safe and authentic spaces do exist, though I am sure they are often hard to find.

I know of one such place. A friend of mine is an African American pastor. Pastor Clifford Chappell helps African American men come to terms with low self-esteem. He calls this work Man-Up. Man-Up includes “Huddles” where men form relationships in small groups in safe places where they can share and release their pain. Pastor Chappell says the pain and trauma these men experience go back in many cases to the slave block, where families were divided and where the white masters became lords over the homes of their African American slaves. Many slave owners made sure to indoctrinate their male slaves that they had no worth or dignity other than what their owners allowed them to have. Man-Up would work for all men, irrespective of color. Why? Male rage today, whether white or black or that of another hue, is often bound up with realizing that our futures have been squandered. We deserve more, but all we will ever get is far less. This self-realization makes us very angry.

Instead of tapping out, let’s tap in as men as we find our humanity in sharing the loss of it with one another. Maybe we can help one another find it again. Don’t internalize and suppress it; you’ll get ulcers, perhaps even commit suicide. Don’t externalize it by beating on others, dehumanizing them, calling other men boys and robbing them of their dignity at the slave block of various forms of seemingly manly competition. Rather, personalize the pain by sharing life with other men, honestly confessing the loss of our innocence and manhood and locating it once again in relationship. Don’t go to therapy and addiction groups where you fake an addiction, like Jack did earlier in the movie. Rather, be honest with your addiction. Don’t rage against it. Real men don’t rage. Real men confess. As unbearable as the disease of lost manhood can be, we will only come to find it in relation to other men and also women and children. Together we can grieve so that together we can someday rejoice in having discovered and shared in our corporate humanity again.

January 17, 2013 How to Sustain Jesus' Justice Movement, Part 4
Recent Comments
0 | Leave a Comment
"Yes, we all ARE on Life Support. This planet has a system that recycles Oxygen, ..."
Kyllein MacKellerann Don’t Take Anything for Granted. We’re ..."
"LORD Jesus, heal Christopher. Amen."
Herrnhut The Resurrection Is More Than a ..."
"00"
Graeme Cooksley Jesus’ Victory Doesn’t End on Easter. ..."
"This article reminds me with my teacher who tells us (his students) to not smoke ..."
Jason Imanuelle Are You Smoking What You’re Selling?
Browse Our Archives
Related posts from Uncommon God, Common Good