Was Moses a Feminist? 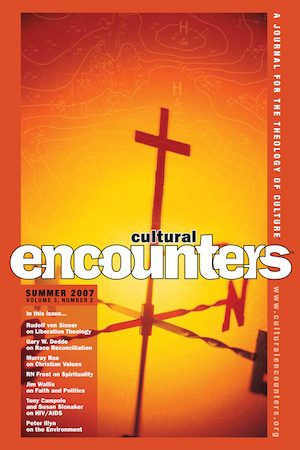 As you may know, I edit a journal for The Institute for the Theology of Culture: New Wine, New Wineskins called Cultural Encounters. We have a new issue out and I’d invite you to take a look. I’ve reprinted the Editor’s Introduction here, giving you a sampling of what is in this issue. If it piques your interest, head on over to the journal, subscribe, and read!

Was Moses a feminist? It all depends on what texts from the Torah one emphasizes and what one means by feminist. If one takes to heart such texts as Genesis 1:26–31 on male and female sharing in the image of God and lordship in the creation, Genesis 2:18, 20 on ezer, meaning “helper” (perhaps even “warrior”; the same word is used for God as a “strong helper”), and Genesis 3:16 on a man ruling over a woman because of the fall, one might think of Moses as a feminist. Of course, there are other texts that are taken by many interpreters to suggest that the society Moses helped form under God’s direction was patriarchal (See, for example, Ex 20:17; Ex 21:2–4, 7; Nm 5:11–31; Nm 18:1–7; cf. Ex 28:1). Still, even if one were to argue for patriarchy, God places limits on it to protect women’s rights in a post-fallen state (Ex 21:7–11). Feminist or non-feminist, Moses was no male supremacist.

The Bible does not have a lot to say about gender, but rather how we are to treat one another as those created in the image of God. There’s no talk about what kinds of toys boys and girls should play with or what colors they should like. Sure, there are those texts that say men should not dress like women or vice versa (Dt 22:5). But what then does one do with Scotsmen who wear kilts? Normally, we don’t think anything of it. We understand that such clothing is associated with masculinity in Scottish culture. Besides, I doubt anyone of us would have dared to mock William Wallace of Brave Heart fame for wearing one.

Was Jacob effeminate? He hung around the tents and did not hunt like his hairy brother, Esau (Gn 25:26–28; Gn 27:11). Yet God made him the Patriarch whose twelve sons became the heads of Israel’s tribes (Gn 49:28). What do we know about Samson’s masculinity? He seemed to be temperamental, moody, irrational, and brash (See Jgs 13–16); depending on one’s cultural norms, this could pass for stereotypes for men or for women. We don’t know much about Samson’s physique, except that he had long hair. He may not have been a big, brawny man, since his strength was associated with his length of hair and God’s presence (Jgs 16:17–20). Would that make Samson feminine? What about Jesus? Was he a real man? Did he hunt and fish? We know he was a carpenter’s son, but not much more. If we are taking Scripture to heart, we will realize that Jesus’ stance on women was radical in his day. Women accompanied Jesus along with the Apostles in Jesus’ ministry (Lk 8:1–3). They were permitted to listen to Jesus teach rather than be locked away in the kitchen (Lk 10:38–41). They also proclaimed the resurrection, as in the case of Mary Magdalene and the other Mary, who were given the task to inform the Apostles that the Lord had been raised from the dead (Mt 28:1–10; Jn 20:10–18). Jesus, who is the ultimate image of God (Col 1:18), is one with his body and bride (Col 1:15, 18; Eph 5:21–33) made up of men and women, to whom he gives himself sacrificially (Eph 5:21–33). His selfless giving stands in stark contrast to all the talk of men needing to be self-made and strong. It took a lot of strength for him to be so weak and give himself so selflessly in life and in death in order to make a new community not shaped by societal norms, but by his example in inaugurating the kingdom of God.

One finds talk in some Christian circles of real men being producers. What does that make of women? Consumers? A Trinitarian model of relationality involving dynamic relationality does not commodify and reduce men and women to quantities of production and consumption. Rather, men and women are communers who mutually produce and consume, but are not defined by such labels. What should define those of us who are Christians is a relational ontology shaped by Jesus’ radical example and union with his church noted above, but rarely noted in our day.

In this issue of the journal, we are not addressing such matters as church leadership, including complementarian and egalitarian themes, or sexuality, as such. There is quite a bit out there already in our circles addressing both subjects. We really wished to focus on gender. Not enough ink has been spilled on this issue, though a lot of blood has flown as a result of massive ignorance. Some of the articles in this issue of the journal set forth how gender and sexuality are distinct subjects, not one and the same. We are more interested in how the framing of gender impacts boys and girls, men and women of diverse ethnicities here and abroad, including on such subjects as sexual abuse, violence against women, and violence to men. One will find in the pages that follow that our views on gender have a significant, potentially painful, and even possibly dangerous bearing on how all of us approach maleness and femaleness.

The Editorial Board of Cultural Encounters maintains that Christian Scripture should always serve as our ultimate written authority as Christians in approaching any subject, including gender. In addition to Scripture, such subjects as sociology, including the comparison of various cultures on their views of gender, the historical development of a society’s and religious movement’s views on gender, along with such genres as film and science fiction, can also help us all think through our dominant cultural frames of reference on gender, provoking thought and constructive conversation. As you proceed in reading this issue of the journal, we do not ask that you agree with everything you read, but that you would be willing to reexamine your existing perspectives on gender in view of Scripture and the various sources studied. Take into account the various arguments involving Scriptural texts, statistics, definitions, and social groupings, along with the cultural reflections of women and men of diverse backgrounds who share their struggles on how views on gender have impacted them and countless others. Healing from trauma and compassionate and just action that flow from the sacrificial love of God can occur if we listen, look, and read well. In this light, consider how both biblically and missionally we can make our homes, churches, and societies more welcoming and inclusive spaces for cultural engagement as we seek to honor Christ, his church, and diverse peoples in our midst and across the globe.

Subscribe to and read this issue of Cultural Encounters.

August 10, 2013
On Ayn Rand: Is Rational Selfishness Rational and Self-Affirming Enough?
Next Post

August 14, 2013 Beyond Cultural Monopolies to the Multifaceted Gospel
Recent Comments
0 | Leave a Comment
"Yes, we all ARE on Life Support. This planet has a system that recycles Oxygen, ..."
Kyllein MacKellerann Don’t Take Anything for Granted. We’re ..."
"LORD Jesus, heal Christopher. Amen."
Herrnhut The Resurrection Is More Than a ..."
"00"
Graeme Cooksley Jesus’ Victory Doesn’t End on Easter. ..."
"This article reminds me with my teacher who tells us (his students) to not smoke ..."
Jason Imanuelle Are You Smoking What You’re Selling?
Browse Our Archives
Related posts from Uncommon God, Common Good