Being buried alive is one of the most terrifying things one can imagine. Not being able to trust anyone is also terrifying. It smothers relationships. Relational isolation is a form of suffocation.

People are buried alive because of not trusting others, including God. A lack of trust causes individuals to prize self-sufficiency and self-reliance in our culture today. And yet, there are times when the relational isolation and pressure to make it on their own gets so intense that panic sets in; they start breathing very quickly and high in the chest and fear that they will die. It might seem counterintuitive, but I am told that one way to counter panic attacks is to stop breathing for as long as possible and then take slow, deep breaths.

Jesus did not experience relational panic attacks throughout his life. Nor was he an Edgar Allan Poe-like character who was buried alive on Good Friday, only to die on Holy Saturday. Still, Jesus’ death on the cross and burial were bound up with undergoing isolation from God and others so that humanity could experience relational connection and not have to undergo unending relational isolation and chronic panic attacks.

Jesus was not buried alive at any point in his life. Rather, he had learned to approach life before God from the standpoint of relational trust. It is as if he always took slow, deep breaths. Of course, there was the cry of dereliction and the horrendous angst bound up with the utterly unique isolation from God that he experienced in those final moments before death. However, it was his unshakable trust in God even in the midst of the horror of such isolation that allowed him to stop breathing altogether on the cross and die. Jesus had full confidence that God would raise him from the dead.

God raised him up, loosing the pangs of death, because it was not possible for him to be held by it. For David says concerning him, “I saw the Lord always before me, for he is at my right hand that I may not be shaken; therefore my heart was glad, and my tongue rejoiced; my flesh also will dwell in hope. For you will not abandon my soul to Hades, or let your Holy One see corruption. You have made known to me the paths of life; you will make me full of gladness with your presence” (Acts 2:24-28).

Between Good Friday and Easter lies Holy Saturday. Jesus did more for human life in his confidence before the Lord in the face of death from Good Friday to Easter Sunday than people can do in all their autonomous striving during their lifetimes. Jesus’ striking death led the centurion and those with him at the cross to exclaim that Jesus was divine (Matthew 27:54). It is easy to die poorly, not so easy to die well, even less so to rise from the dead. Relational isolation requires more than resuscitation. It requires resurrection. The hope of the resurrection makes it possible to die a thousand deaths to the relational isolation that kills us all and keeps us from trusting and caring for others.

Over the course of his life, Jesus did not take matters into his own hands and do things his way. He did them his Father’s way. Jesus put his life in his Father’s hands even to the point of dying on the cross for those entrusted to his care. Yet his life did not end there, for as the Bible teaches, Jesus rose bodily on Easter.

We can trust in God because Jesus did. We can trust in Jesus because the Father has entrusted us to him. Though his enemies seized him and led him away to be judged, none of it was lost on Jesus. He knew in advance what was going to happen. He knew that his Father was in control and that his life was in his Father’s hands. We can have confidence in Jesus because as in the case of the disciples on the night of his betrayal, he will never lose anyone the Father has placed in his hands (See John 18:4-9).

Jesus’ authority to lay down his life and take it up again is based on the command he received from his Father (John 10:18). It was not the spirit of individual autonomy in which Jesus trusted, but God’s Spirit, who raised Jesus from the dead; in like manner, it will not be the spirit of autonomy that raises us up, but God’s Spirit who will raise us from the dead (Romans 8:11).

Just as there is a way of dying well, as in the case of Jesus who entrusted himself to the Father to the point of death on the cross, there is also a way of living poorly. Life apart from relational trust is not worth living. In fact, those who do not trust anyone have already died. They are buried alive. The actuality of Jesus’ trust in God in the face of death makes it possible for us to bury relational isolation and live well as we trust anew this Holy Saturday. Easter Sunday will soon be here. 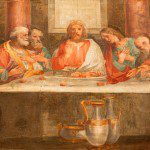 April 20, 2014 What Would Have Changed If Jesus Had Not Risen From The Dead?
Recent Comments
0 | Leave a Comment
Browse Our Archives
get the latest from
Uncommon God, Common Good
Sign up for our newsletter
POPULAR AT PATHEOS Evangelical
1