Patheos Explore the world's faith through different perspectives on religion and spirituality! Patheos has the views of the prevalent religions and spiritualities of the world.
Hunkpapa Lakota Sioux Chief Tatanka-Iyotanka—“Sitting Bull” (1831-1890)— was reported as saying, “The white man knows how to make everything, but he does not know how to distribute it.” Toward the end of his life, the great chief joined the Buffalo Bill Cody Wild West Show. During his brief tenure with the show, he often commented on the state of poor white children. It is said of Sitting Bull that while poor, “he saves nothing of what he earns. He is continually pressing coins into the hands of the ragged and hungry white kids who seem to be at every stop on the circuit.” It paralleled his practice among his own people. “As a Sioux chief he is responsible for the welfare of his people, which means giving away what he has so that no one will go hungry. He cannot understand how white people can neglect their poor” (The quotations are taken from this page: “The Wild West, 1885”).

Seemingly, America can make anything, but do we know how to distribute it? How about food distribution and equality? I wonder what Sitting Bull would say today over the state of America’s growing food inequities. A September 2014 Washington Post article addresses “America’s growing food inequality problem.” The article highlights a study titled “Trends in Dietary Quality Among Adults in the United States, 1999 Through 2010” in The Journal of the American Medical Association Internal Medicine. Among other things, the newspaper article notes that the price gap between healthy and less healthy foods, growing income gap, and likely knowledge gap among the poor (who might have less occasion to learn about the problems associated with unhealthy foods and diets[1]), are factors that contribute to the inequity problem. In closing, the article claims,

No matter the cause, the gap is marginalizing a significant portion of the population. “In America, food has become the premier marker of social distinctions, that is to say—social class. It used to be clothing and fashion, but no longer, now that ‘luxury’ has become affordable and available to all,” Adam Drewnowski, an epidemiologist at the University of Washington, told Newsweek back in 2010.

There now seems to be further statistical truth to back up that claim.

What does it say about our society that we have markers for social distinctions, especially if and when food becomes the “premier marker”? What do we make of our social status as a country, if we do not make every effort to overcome this widening gap?

I can only imagine what Sitting Bull would think of such social distinctions and America’s social status. He stands as a stark contrast or perhaps a prophetic complement to the “Charging Bull” of Wall Street, which symbolizes “virility and courage” and America’s “can-do spirit” (Refer to the story behind the making of Wall Street’s “Charging Bull”). Perhaps we should build a statue to Sitting Bull and place it next to the Charging Bull as a symbolic reminder that we must do everything possible to distribute healthy food to the whole of our society and beyond.

What can we do with our “can-do spirit” as Americans to overcome the obstacles that stand in the way of food equity? Going further, how does the “will-do” Spirit of God who elevates Jesus, as he gives good gifts to the poor (Matthew 14:13-21; Mark 6:30-44; Luke 9:10-17; John 6:1-11), inspire and lead the church to make a difference in this way in America and abroad?

Please join us for New Wine, New Wineskins’ conference on food scheduled for April 18th at Multnomah University in PDX titled “Food Fight—A Civil Dialogue Over Our Daily Bread.” See here for the blog post by this title. We will reflect upon food distribution, quality of food, related themes of food justice, and a theology of food. 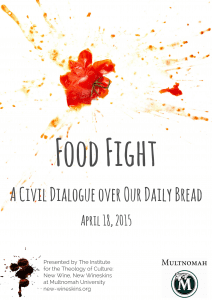 [1]I would add that the knowledge-educational opportunity gap and income gap often feed off one another in American society. 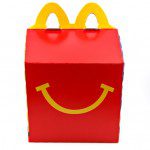 January 27, 2015
“Blessed are those who hunger and thirst for righteousness”—not those who crave fast food justice
Next Post 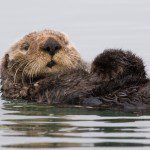 February 3, 2015 Sea Otters, Trophic Cascades, and Gentrification
Recent Comments
0 | Leave a Comment
"Yes, we all ARE on Life Support. This planet has a system that recycles Oxygen, ..."
Kyllein MacKellerann Don’t Take Anything for Granted. We’re ..."
"LORD Jesus, heal Christopher. Amen."
Herrnhut The Resurrection Is More Than a ..."
"00"
Graeme Cooksley Jesus’ Victory Doesn’t End on Easter. ..."
"This article reminds me with my teacher who tells us (his students) to not smoke ..."
Jason Imanuelle Are You Smoking What You’re Selling?
Browse Our Archives
Related posts from Uncommon God, Common Good