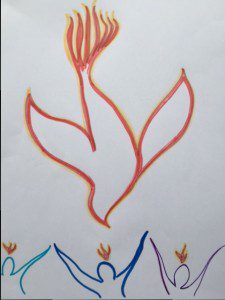 One of the striking features of Acts chapter 2 is that the Spirit’s descent at Pentecost led the people gathered from around the world to speak in different languages:

When the day of Pentecost arrived, they were all together in one place. And suddenly there came from heaven a sound like a mighty rushing wind, and it filled the entire house where they were sitting. And divided tongues as of fire appeared to them and rested on each one of them. And they were all filled with the Holy Spirit and began to speak in other tongues as the Spirit gave them utterance (Acts 2:1-4; ESV).

No doubt, the Spirit of God desired for all the Jews gathered in Jerusalem from “every nation under heaven” to hear and understand the Word of God in their native tongues (Acts 2: 5-6). The Spirit of God is a phenomenal linguist.

However, against the backdrop of empire building in biblical times (in fact, all times), it is striking that the kingdom of God that Jesus inaugurates through the Spirit does not involve linguistic dominance. The Spirit of God could have enforced on the early church one tongue, but did just the opposite from the very beginning of the church.

Throughout the history of the world, empires have used language as a tool to subject the peoples they conquer (Refer here to a meditation by Joel B. Green on Pentecost that references this phenomenon). Just think of the rule of the Babylonians, Greeks, Romans, French, Germans, Japanese, and—English, to name a few (but not American?!). Still, one does not have to have an empire to think one’s own language is best. Various peoples prize their language as supreme. It even manifests itself in church circles.

I spent a good portion of my early years in a church of Swedish origin. Even though we were all Americans, I came away with the sense that Swedish was viewed as heaven’s tongue. There was even the subtle or not so subtle sense in my Swedish American congregation that Norwegians were in for a rude awakening when they got to heaven (if they made it in!). That conservative evangelical congregation was in for a big awakening when an Italian American of a Pentecostal background was called to shepherd the flock. Although he spoke perfect English, it took some of the flock a good deal of time to recognize Jesus’ voice in this pastor’s words. And yet, it was through this Italian American pastor’s leading that my German-Hungarian American father experienced a spiritual awakening. Go figure.

Like many Americans, I am really confused. I am a blend of many different cultures—Swedish (on my mother’s side), German, Hungarian, French and Irish (on my father’s side). My kids are even more so—in addition to all these backgrounds, they are Japanese on my wife’s side. Yet there is one thing we all have in common—we all speak English.

English dominates much of the world, though perhaps, someday it will be Chinese. In Jesus’ day, Greek was dominant in many quarters, though Latin, Aramaic and Hebrew were also used by various communities in different contexts in the region (See this article “Spoken Languages in the Time of Jesus”).

The claim that Greek was dominant should come as little surprise, since the New Testament was written in Koine Greek. The Hebrew Scriptures and New Testament have been translated into countless languages. Unlike those religions that claim that translations corrupt the original, it follows from the crucifixion and resurrection that Jesus dies to the old order of things to make all things new (See Lesslie Newbigin, The Gospel in a Pluralist Society {Grand Rapids: William B. Eerdmans, 1989}, page 145). Jesus’ people sing a new song in countless cultural ways.

The Spirit of Pentecost does not relativize the good news of Jesus, but particularizes it in manifold ways. What remains constant is Jesus’ story: his incarnation, crucifixion, resurrection, and ascension. What changes is the cultural representation.

This Sunday, we celebrate Pentecost—a key event in the Christian calendar (Refer here). The church began that day in Jerusalem when the Spirit fell upon believers. What bearing does Pentecost have on the church today? It involves declaring the glory of God in diverse cultural forms, including Micronesian, Hawaiian, Pidgin, Ebonics and sign languages, not just Hebrew and Greek, Swedish, Japanese, Chinese, and English. Jesus’ kingdom goes forward not by conquering languages, but by freeing speech to express his heavenly wisdom across the globe in countless, beautiful ways. No matter how ancient, Pentecost never gets old or rigid. The Spirit’s movement ever remains fresh, fluid, and free.

May 17, 2015
The Ascension: Jesus Has Some Serious Hang Time.
Next Post

May 25, 2015 Memorial Day—Remember the Fallen
Recent Comments
0 | Leave a Comment
"yes, not sure what your point is, but all men will give an account for ..."
fed up White Privilege: Where Do We Go ..."
"And that pendulum will swing both ways."
theresa perry White Privilege: Where Do We Go ..."
"All dates matter."
John (not McCain) Post 9/11: Christian Nationalism, the Global ..."
"A real conspiracy is generally a small group of people plotting to achieve a specific ..."
Bernard Dainton Conspiracy Theories: In Pursuit of Truth
Browse Our Archives
get the latest from
Uncommon God, Common Good
Sign up for our newsletter
POPULAR AT PATHEOS Evangelical
1