Capitalism Works. Darwinism Works. But Do They Work Well Enough?

Capitalism works. Darwinism works. But do they work well enough? Many believe that capitalism effectively encourages individual enterprise for the sake of making profit in a competitive economic environment. Many also maintain that Darwinism effectively describes the process of natural selection, where the biologically fittest survive. But what happens to meaning, if all that exists in market economies and nature are the equivalents of “inertial masses, bouncing merely casually” [not causally] “against each other in public space”?—to borrow a line from Robert W. Jenson.[1] What happens to individual meaning and communal value if humans are simply “inertial masses” bouncing casually or purposelessly about in absolute space?

Self-interest, individualism and the invisible hand of the market are viewed as constitutive of Adam Smith’s framework. It has been claimed that Smith influenced Darwin, who with Smith, was influenced by Newton.[2] Newton conceived the God-world relation in a voluntarist manner. God is not immanent in the world process. Rather, God stands outside the world of order he creates and voluntarily intervenes so that its operations continue; if God were not to intervene, things would come to a halt. Thus, there is no inherent progress or purpose in the makeup of the material universe. Newton sought to safeguard value by way of God’s intervention. But one may ask: is the seeming intervention really only a projection? Do we really need God as an explanation for causal forces?[3] And if not, what happens to meaning and value in the world?

Cause-effect relations can themselves be seen as projections. In a nominalist framework, causes and effects are readily viewed as mere habits of thought to which we give names as particular relations, just as classifications we develop for ‘species’ are simply useful names that we project to provide order to otherwise autonomous particulars in our experience. In short, everything is conceived in individualistic or atomistic terms. There is no fundamental, purposeful connection between the forces in the world. If there is no inherent progress or purpose, but such progress and purpose are names voluntarily imposed from without as human projections, they can easily be renamed as naturalistic or economic invisible hands blindly bouncing about with their business. Voluntarism and nominalism reinforce one another and can very well give rise to aimless naturalism and nihilism.

One approach at attempting to combat skepticism emerges in Immanuel Kant’s critical philosophy. The nominalist skeptic David Hume awakened Kant from his dogmatic slumber, as Kant claimed in his Prolegomena to Any Future Metaphysics.[4] In Kant’s awakened state, he sought to preserve certainty in the sphere of Newtonian knowledge claims pertaining to the physical realm. Where skepticism reigns, nihilism finds fertile soil in which to grow, especially in Kant’s era where authority was bound to the rational intelligibility of the physical universe. Kant went further in his philosophical enterprise. He limited knowledge to the realm of physics to make room for moral freedom and faith. But did he succeed?[5] Given his particular fact-value distinction, can one truly safeguard value and moral freedom for the individual in an otherwise blindly determined, mechanistic post-Newtonian universe? Is human value itself a nominalist projection that we only seemingly will into being, our wills themselves the product of machine-like natural forces?

Simon Critchley raises questions over the viability of Kant’s fact-value distinction, raising doubt as to whether Kant succeeds in overcoming the divide:

How is freedom to be instantiated or to take effect in the world of nature, if the latter is governed by causality and mechanistically determined by the laws of nature? How is the causality of the natural world reconcilable with what Kant calls ‘the causality of freedom’? How, to allude to Emerson alluding to the language of Kant’s Third Critique, is genius to be transformed into practical power? Doesn’t Kant leave human beings in what Hegel and the young Marx might have called the amphibious position of being both freely subject to the moral law and determined by an objective world of nature that has been stripped of any value and which stands over against human beings as a world of alienation? Isn’t individual freedom reduced to an abstraction in the face of an indifferent world of objects that are available to one – at a price – as commodities?[6]

Some will argue that science deals with what is, whereas ethics deals with what should be. Will such a distinction hold? If we are ultimately blind, inertial material objects driven and controlled by subconscious or unconscious biological urges or forces, what happens to ethics? Does not “should” imply an ability to choose freely for one course of action over against another? Perhaps not, if there is progress within nature, liveliness, and unpredictability.

It is debated as to whether or not Darwin robbed matter of progress or purpose: “The problem of meaninglessness arises only if ‘matter’ is conceived as inert, only as long as science deploys materialism whose physics is basically Newtonian.” But there are other ways of framing materialism, where it is not viewed as inert, but as Jane Bennett puts it, “enchanted.” It is enchanted in that “matter has a liveliness, resilience, unpredictability, or recalcitrance that is itself a source of wonder for us.”[7] Moreover, it is also debated as to whether Darwinism requires an atomistic or collectivist framework for natural selection and the survival of the fittest: does the selection process occur to benefit the individual or the larger group?[8] If there is purpose, and if the purpose is framed for the sake of the community as a whole, and not simply the individual, perhaps we are not mere “inertial masses,” bouncing casually or blindly in space? Perhaps our communal identity is not ultimately undone, contrary to what Jenson calls America’s “practiced supposition,”[9] and we can move from a culture of things to persons in relation? In similar fashion, as with Darwin, perhaps Adam Smith is not to be charged with an atomistic account of markets, where each individual goes it alone in strict competition for economic survival and success.[10]

Capitalism may very well work, and so might Darwinism—but do they work well enough? If we are talking about a capitalistic and Darwinian ideology wherein everything is viewed as blind, inertial, individualistic forces that find their value (finding value is here to be rendered in mere metaphorical terms, since everything would be determined) simply in terms of market profit and biological fitness, how might we ever be ‘willing’ to choose in favor of ‘the other’? Here I chiefly have in mind the neglected and vulnerable other in view of the biblical exhortation to care altruistically for the orphan, the widow and the alien in their distress (including those belonging to the enemy tribe—such altruism is more than biological). Capitalism and Darwinism of baser, bourgeois kinds may work well for you and me (who have the luxury to write and read this post), but they do not work well enough for those without enough time and resources to spare, as they can barely survive.

[2]Conor Cunningham, Darwin’s Pious Idea: Why the Ultra-Darwinists and Creationists Both Get It Wrong (Grand Rapids: William B. Eerdmans, 2010), page 14.

[3]See the discussion of God’s role in Newton’s mechanistic philosophy in William B. Ashworth, Jr., “Christianity and the Mechanistic Universe,” in David C. Lindberg and Ronald L. Numbers, When Science and Christianity Meet (Chicago: The University of Chicago Press, 2003), page 84. Contrary to Newton and his fellow apologists for a mechanistic universe created and sustained by God, Ashworth claims that the early church fathers perceived mechanistic philosophy as leading to atheism; it was an object of scorn during the middle ages and largely ignored during the Renaissance (page 84).

[4]See the discussion of Kant, Hume, causality and metaphysics in the Stanford Encyclopedia of Philosophy titled “Kant and Hume on Causality;” http://plato.stanford.edu/entries/kant-hume-causality/ (accessed on 10/3/2015).

[6]Simon Critchley, “What is to be Done? How to respond to nihilism,” in Continental Philosophy: A Very Short Introduction (Oxford: Oxford University Press, 2001), page 76.

[9]Jenson, America’s Theologian, page 150. The full statement in Jenson reads: “America’s communal entity has been undone by the practiced supposition that we can be free only by treating one another and regarding ourselves as inertial masses, bouncing merely casually against each other in public space.”

[10]See Michael J. Sandel’s discussion of the need to safeguard against market ideology in What Money Can’t Buy: The Moral Limits of the Markets (New York: Farrar, Straus, and Giroux, 2012). Cynthia D. Moe-Lobeda argues that Adam Smith also disparaged a market morality. She argues that Smith promoted, among other things, mutual love among neighbors, the pursuit of justice, support of government in proportion to one’s revenue, and an awareness of the proclivity among humans to find pleasure in the well-being of others. See Moe-Lobeda’s work, Healing a Broken World: God and Globalization (Minneapolis: Fortress Press, 2002), page 62, note 67, page 199. See also her reference to Thomas Friedman’s work The Lexus and the Olive Tree (page 199, note 62) in which he makes a connection between the inevitability of globalization and that of the sun’s dawning every morning. Human progress is bound up with such inevitability (See Thomas L. Friedman, The Lexus and the Olive Tree (New York: Farrar, Straus, and Giroux, 1999), page 6. 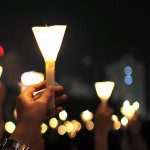 October 2, 2015
A Faith Not Worth Dying For Is Not Worth Living For: Thoughts on Roseburg
Next Post

October 9, 2015 Complexify Religion if you Want to Stamp Out Fanaticism
Recent Comments
0 | Leave a Comment
"Most conspiracy theories are actually observations of conspiracy facts . Facts that prove conspiracy that ..."
Truth-Road LessTravelled Conspiracy Theories: Harmful and/or Healthy?
"Except Christians didn't invent human rights, or morality. That you believe so, or that Hitlers ..."
Truth-Road LessTravelled MLK’s Faith: Inspiration to Keep Going ..."
"Human rights are a "Christian" invention at best.Logically, there are no human rights, dog rights, ..."
bill wald MLK’s Faith: Inspiration to Keep Going ..."
"Your view..."They were marching to gain sympathy and political power and, I suppose, it boosted ..."
Truth-Road LessTravelled MLK’s Faith: Inspiration to Keep Going ..."
Browse Our Archives
Related posts from Uncommon God, Common Good