A student asked for prayer for his mother yesterday. She lives in Oregon and is without a sufficient supply of water. I can’t recall ever receiving a prayer request like that in the past. Given dramatically changing weather patterns, it may become a more frequent prayer request in my immediate circles in the years ahead.

My immediate circles are rather insular. I don’t have enough discussions with Native Americans, who have dealt with these and related issues since white settlers moved into the region along the Columbia River. Across North America, indigenous people have had to deal with the aftermath of the Doctrine of Discovery and its outworking in laws across the land: no ownership, no rights, and thus, insufficient access to water.

It is not simply about access to water, but also, the quality of the water to which we have access. Who would have ever thought that we would need to ponder the following: is safe and clean water a human right? I’ve never had to consider that question. After all, up until recently, I have rarely drunk tap water (but I have drunk on tap!). Bottled water is often assumed to be better. But better for whom? Recently, groups in California sued the US Forest Service for allowing Nestle to continue bottling water; it was dramatically reducing water supplies in the state.

Now, how many people can afford bottled water? And how many people can afford water—bottled or unbottled—that is contaminated? Just because companies bottle water does not make it safe; some companies bottle unfiltered water and promote it as safer than tap water (even though the only difference is that it is distributed in bottles, not pipes; moreover, some caution that plastic bottles bear their own risks with contaminants; not to mention concern over landfill.)

Just because companies bear certification that their products’ water is safe, it does not make the water truly safe. Dr. Steven Kolmes of the University of Portland recently gave a talk for New Wine, New Wineskins in which he claimed that the regulations for water cleanliness across the nation are unsafe, even in Oregon, which has the most rigorous standards. Safety is a relative word. For Dr. Kolmes, the water pollution problem is so bad that the deciding factor is not really how safe the water is, but how much contamination the government allows in its support of industry. He also pointed out that scientific data is often manipulated for economic purposes. He maintained that economic aims should not drive our determinations, but ethical considerations such as safety.

Building on these points, I would claim that clean water, like human life—which is mostly water—should frame the discussion of economics. There are limits to what money should buy.  Access to clean water is a fundamental human right, which should never be an accessory to affluence.  Moreover, in the end, if we continue poisoning our water supply, who will be around to spend the money?

November 1, 2015
All Saints’ Day: We Need Saints in an Age of Cynics
Next Post 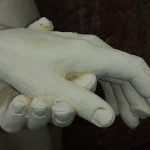 November 5, 2015 Church and Science: Partners for the Common Good
Recent Comments
0 | Leave a Comment
"When I think of “Christian America”, I think of all of modern mediaand hype that ..."
Emily Tubberville I Can’t Wait for Christian America ..."
"I definitely agree with what is being said. I tend to see Christianity as being ..."
Monica Zherebnenko I Can’t Wait for Christian America ..."
"My AP US History teach in high school once told me, history iswritten by the ..."
Emily Tubberville Why Is the West the Best?
"When I read this I think about worship; in my church, in my own life, ..."
Brandon Buck Are You Smoking What You’re Selling?
Browse Our Archives
get the latest from
Uncommon God, Common Good
Sign up for our newsletter
POPULAR AT PATHEOS Evangelical
1