Evangelical Zen: A Christian’s Spiritual Travels With a Buddhist Friend

A book reading for Evangelical Zen is set for 7:30 p.m. on Tuesday, January 26, 2016, at Powell’s City of Books. The event will include readings from Metzger and Sallie (Jiko) Tisdale, who will be reading one or two reflections from Abbot Kyogen Carlson’s contributions in the volume.

Until then, Metzger answers our questions about Evangelical Zen and the unique vision behind it.

Can you give us a brief synopsis of the book?

Evangelical Zen is part Augustine’s Confessions and part Robert Pirsig’s Zen and the Art of Motorcycle Maintenance. As an Evangelical Christian theologian, I reflect on my spiritual journey — an inner pilgrimage of sorts that weaves through a physical 40-day journey with my family in Japan.

The experiences of that journey, the beauties of Japan, its culture, and its religion become for me a lens on a deeper quest: I am searching for and, I believe, finding a global humanity in conversation with my friend and literary traveling companion, Abbot Kyogen Carlson, a Zen Buddhist Priest.

Can you define what you mean by “spiritual travels”?

Our travels through life as Christians are ultimately spiritual, not secular. We should never compartmentalize our faith, even in seemingly secular and pluralistic cultural settings.

Moreover, our faith is not static. While our eternal destination as Christians is secure through personal faith in Jesus Christ, our faith is an ongoing journey. Thus, our encounters with various people, places and things in life can serve as sign posts of faith as we seek to love God with all our hearts and our neighbors as ourselves.

What compelled you to write this book?

I felt compelled to write this book because my spiritual journey has taken me to Japan over the years through marriage to my wife Mariko, a Japanese national. Our children Christopher and Julianne have joined us on that journey. I have come to deeply love Japanese culture. Through my experiences in Japan, I have come to love Jesus more while also loving people across the globe. My travels there have helped me in my endeavors to become more sensitive to people of various cultures here and abroad.

Such growth here has been enhanced through my friendship over the years with Zen Buddhist Priest, Kyogen Carlson, who founded Dharma Rain Zen Center in Portland with his fellow abbot and spouse, Gyokuko. Since we first met in 2003, and until his sudden passing from a massive heart attack in September 2014, Kyogen and I developed a deep, abiding friendship. He agreed to write responses to the various essays, as well as a foreword to the whole book. For all our theological and philosophical differences from one another revealed in the book, Kyogen’s thoughts complete mine in this volume as we seek to understand life and humanity better.

How might reading this book be beneficial for a Christ-follower?

Evangelical Zen will help Christians navigate life and our increasingly diverse and multi-faith culture in such a manner that we can love God through Jesus more without having to love our diverse neighbors less. In fact, I believe our Christian faith, if cultivated well, makes it possible for us to love people of diverse paths better and with more sensitivity here and abroad.

Why is it important to build friendships with people of other religions? 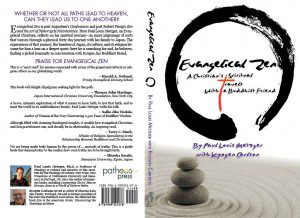 I believe God’s love has been on display over the years with my Buddhist friends here in Portland, as my students and other Christians have joined the Carlsons, Dharma Rain Zen Center parishioners, and me for potluck meals and dialogues where we discuss key aspects of our respective faiths, including what divides us. We don’t sweep our differences under the table, nor do we stop short of engaging one another relationally. Instead, we go through our differences to build bridges of authentic trust that bind us together in the midst of culture wars that could easily divide us.

My students value such opportunities to engage people of diverse faiths. After all, they also live in an increasingly religiously diverse society. Like all of us, they need to learn how to engage their multi-faith society well in grace and truth. Their neighborhoods, the marketplace and ministry contexts (such as in the various spheres of chaplaincy and pastoral visitation) require that they become sensitive and adept at presenting biblical truth in a truly meaningful and gracious way. As our former MU president Dr. Joe Aldrich used to say, “People don’t care how much you know until they know how much you care.”  That is equally true here in the States, Japan, and anywhere else in the world.

[This interview was originally posted at the Multnomah University Blog]

November 10, 2015
Is Religion a Biologically Determined Neurosis?
Next Post

November 14, 2015 The French Connection—The Human Connection: The Law of Relational Gravity
Recent Comments
0 | Leave a Comment
Browse Our Archives
get the latest from
Uncommon God, Common Good
Sign up for our newsletter
POPULAR AT PATHEOS Evangelical
1