Can We Transfer Consciousness to Synthetic Bodies without the Move Proving Catastrophic?

For those like myself who think we are embodied beings rather than ghosts in fleshly machines, we may fear the loss of our point of reference as humans, if we transfer consciousness to synthetic bodies, machine boxes, or even bats. More on bats later.

With these questions in mind, it is worth quoting from an article at Natural Society titled “2045 ‘Immortality’ Transhumanism Program Threatens Humanity’s Integrity”:

Being advocates of natural health and believing the human body has its own intricate design, an attempt to become a synthetic avatar would potentially erase all of the aspects of humanity that define our character and being.

This technology at its fruition would also attempt to delve into realms of reality no scientist has ever been able to grasp within a natural, human viewpoint of comprehension. Theoretical physicists are beginning to admit that our universe is a shadow of a larger reality, and the natural man can scarcely understand it with his own devices. Like it or not, this universe is far more complex than what we have observed.

The human body is a very complex reality, involving material phenomena as well as consciousness, which individuals like Thomas Nagel maintain cannot be reduced to matter, and yet is not separate from matter (See Thomas Nagel, Mind and Cosmos: Why the Materialist Neo-Darwinian Conception of Nature  Is Almost Certainly False {Oxford: Oxford University Press, 2012}). John Searle is also wary of materialism as the opposite of Cartesian Dualism. Searle is a naturalist, who does not want to reduce mental processes to a materialist conception of reality. A (critical) review of Searle’s position summarizes it as follows: “Although Searle rejects property dualism, he makes it clear that he does not agree with this common materialist assumption. He believes that it is perfectly consistent with naturalism to hold that the world is entirely composed of physical particles obeying the laws of physics while still maintaining that there are irreducible features of the mind that fit perfectly well into a naturalistic physical ontology.”

More on Nagel’s thought experiment. Nagel claims that humans could not think objectively as bats (bats as mammals are taken to experience consciousness), even if somehow we could be transformed into these bug-eating, upside-down hanging, superbly sonar-skilled flying creatures. We may be able to experience aspects of bat lives, but not consciousness. After all, would not our own subjective states as humans interfere? Would it not be necessary for our brains to be wired as those of bats from the time of birth to think just as bats would? See Nagel’s essay, “What Is It Like to Be a Bats?”

The reverse question also arises: if we transformed or metamorphosed into bats, could we think and operate any longer as humans? Maybe we would not be bat men, but bat monsters, as we fly about in space. The same kind of question arises as it pertains to mechanical boxes. If our intelligence and perhaps consciousness could be transferred to machines, could we ever think as humans? Or would we lose contact?

This question arises, as one considers the movie Transcendence starring Johnny Depp, Rebecca Hall, Morgan Freeman, and Kate Mara. In the film, the move is made to transfer the intelligence and consciousness of the world’s leading expert (played by Depp) in AI to a machine, as the scientist dies. ‘His’ mind is free and he is able to go everywhere; he or it experiences ‘transcendence’. There are no limits, as he is beyond space through cyberspace. He is everywhere and nowhere at the same time, as his wife says he is no longer with her in his cyber explorations to improve the race in terrifyingly impending and dramatic proportions. The results of such transcendence or disembodiment may prove catastrophic. As one commentator on this theme says in a Newsweek review of the film, “While anecdotally measurable, linking consciousness directly to brain activity remains elusive. So we can’t be sure that a fully mapped brain inside a computer would choose to launch nuclear missiles directly at the moon to see what happens, or just take its virtual pants off in public.” The only thing that connects Depp’s character remotely to humanity is his ‘sense’ of love for his wife (a fellow expert in AI). She and her colleagues are the only ones who can potentially ground him. But without some connection to human embodiment, where would ‘mind’ go and what would it do?

These are not simply the concerns that Luddite terrorist groups might pose (like the one in the movie), as they seek to pull the plug on the transfer of consciousness. In the film, Depp’s fellow AI scientists address these concerns, as they ponder whether or not to try and shut him or it down given what appears to be an imminent apocalypse.

The moral of the story may be that before such transference can or should be made, we need to come to terms with a solid grasp of consciousness and its connection to our bodily birth states. Moreover, the more we move to explore artificial intelligence, the more we need to explore human relationships. They may be the only things that keeps ‘minds’ in machines from abstract speculation that no longer accounts for those around them—not so unlike people lost in cyberspace on their cell phones as they pass by one another on sidewalks, or crash into one another on highways today. 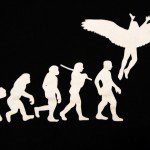 February 8, 2016
Pushing the Outer Limits of Humanity and Its Bearing on Space Travel: The Trans-human Quest
Next Post

February 17, 2016 Is Christ Divided? A Reflection on David Gushee's Call for a Great Evangelical Divorce
Recent Comments
0 | Leave a Comment
"Thanks for great post Software Management System"
Ninja Web Tools Keep a Stiff Upper Lip in ..."
"I am so sorry for this frustrating and painful experience you and Christopher had to ..."
Jean Sullivan Keep a Stiff Upper Lip in ..."
"Thank you for this thoughful and thought provoking reflection."
Fred Horgan Homeostasis and Spiritual Peace
"My view of evangelicals is, if there is any proof of the existence of Satan ..."
Verdure What Is the Difference Between a ..."
Browse Our Archives
Related posts from Uncommon God, Common Good