How to Have Healthy Conversations on Healthcare

One of the news items that is bound to give many people ulcers or heart attacks is the constant struggle over health care in our country. As under the Obama administration, so now under the Trump administration, we are facing once again the possibility of an overhaul to the health care system. If we were left or forced to choose, which of the following values would you prioritize when it comes to health care—affordability, accessibility, quality? Why would you choose that one over the others? Which would you choose second and third, and why? All too often, the conversations turn into hostile and unhealthy debates. How do we move forward beyond conversational stalemates to have healthy conversations on health care?

Conservatives and liberals often speak past one another, in part because we do not grapple with one another’s perspectives. We all tend to see our positions as righteous, and those who disagree with us as unrighteous. Social psychologist Jonathan Haidt and his colleagues have provided us with tools for engagement so that we can do a better job accounting for the various moral intuitions that drive all of us to varying degrees (Refer here; he has also applied his framework to the healthcare debate on occasion).

Let’s take one example of how we often miss one another, stereotyping and failing to account for our best moral intentions. Liberals are often stereotyped as wanting to penalize successful and hardworking people to provide health care for lazy individuals. Conservatives are often stereotyped as being greedy and not wishing to share with those less fortunate. Many liberals believe that there are structures that benefit some and harm others, making it impossible to gain quality health care. On the other end, many conservatives believe that it is harmful to people’s dignity and wellbeing to provide them with health care if they are not given the incentive to work hard. Of course, numerous other examples could be cited.

Say what you will about “the other side,” but if you want to move beyond partisan impasses not simply in Washington, but also at the water cooler at work and coffee bar at church, it is best to try and account for other people’s diverse moral intuitions in making your case. Healthy conversations on health care require getting to the moral heart of one another’s arguments.

We all have the tendency to harden the arteries of our arguments on moral matters. Debates often lead us to get defensive, especially when we feel as if others are judging us as immoral. Moreover, as Haidt maintains, we operate initially based on intuitive reactions apart from reason. Thus, if we are not careful, we engage in confirmation bias and impulsively reject any argument that does not appear to support and gratify our own stances. It also does not help that social media often shapes us to reduce arguments to the size and complexity of tweets.

It is important that every time we get into a discussion on health care reform that we take a deep breath, learn to ask open questions, and probe other parties’ positions to ascertain what their best moral reasons are, including their hopes and fears. As important and life-impacting as the subject is, it will help us if we take equally seriously James 1:19: “Know this, my beloved brothers: let every person be quick to hear, slow to speak, slow to anger” (James 1:19; ESV). It is also important that we consider how we might be blind to certain dimensions of a debate, including the various facets of moral reasoning. The Lord Jesus helps us here, as he cuts through the arguments to get to our conservative and liberal souls with a surgeon’s knife: “You hypocrite, first take the log out of  your own eye, and then you will see clearly to take the speck out of your brother’s eye” (Matthew 7:5-6; ESV). Just maybe we can then influence one another toward more well-rounded positions that guard against bleeding hearts and clogged arteries. 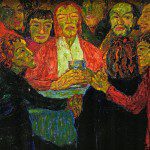 July 17, 2017 Who Locked Up Mercy and Threw Away the Key?
Recent Comments
0 | Leave a Comment
Browse Our Archives
Related posts from Uncommon God, Common Good