What a Secular Jesus Follower Has to Teach Us on Sexploitation: An Interview with Tom Krattenmaker

What a Secular Jesus Follower Has to Teach Us on Sexploitation: An Interview with Tom Krattenmaker March 15, 2018 Paul Louis Metzger 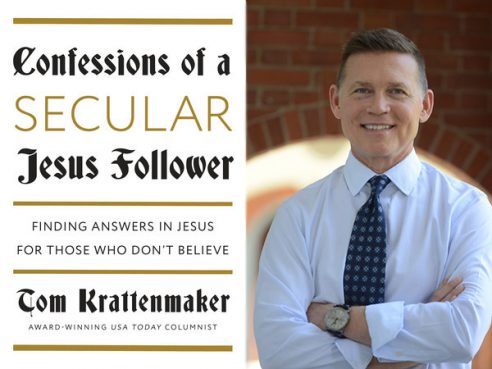 Tom Krattenmaker is an award-winning author and journalist. His most recent volume is titled Confessions of a Secular Jesus Follower: Finding Answers in Jesus for Those Who Don’t Believe. Tom is a good friend with whom I enjoy robust conversations on spirituality and contemporary culture. The following interview is part of a series with Tom about the subject matter of his book.

Paul Louis Metzger (PLM): Tom, your chapter “Sexploitation” is a prophetic challenge to people of all walks of life in our society. Some Christians might puzzle over your stance as a secular Jesus follower on this subject. For example, they might wonder how it is that someone who supports many aspects of the sexual revolution can look to Jesus to curb exploitive sexual behavior in our society today. How would you respond to them in their puzzlement?

Tom Krattenmaker (TK): I have fun dramatizing that potential puzzlement in the “Sexploitation” chapter of the book. Near the beginning I acknowledge that readers—especially non-Christian readers—will wonder, skeptically, what we could possibly learn about sex and gender relations from a celibate religious figure from two thousand years ago. Jesus lived way before there was online pornography and reliable contraception and the other things that define sex culture today. Jesus was also part of a pious religious community with very restrictive sexual mores. Don’t forget his story also comes wrapped up in a Christendom that sports a spotty-at-best record when it comes to healthy understandings of sex. When we try to figure out what is broken about sex today and how we could go about repairing it, what, pray tell, could we possibly learn from Jesus?

Well, I can answer that in two words: A lot. And the insights have resonance whether you’re a Christian or not.

PLM: What specifically could secular people learn from Jesus?

TK:  Let’s take a minute to focus on Jesus’ well-known prohibition against divorce. Even outside the church, there’s some degree of awareness of this teaching—and a sense that this is one of those Jesus things that’s woefully outdated, not to be taken seriously. Well, what did Jesus actually say in the biblical account, and what was the context in which he said it?

I took a close look at Matthew 5:32 and noticed that, for one, Jesus was addressing men. That’s interesting. And he seems to be saying that unless you have a damn good reason it’s wrong to divorce your wife. The New International Version uses the word “victim” (i.e. a victim of adultery and thus an untouchable) to describe the state you leave her in if you divorce her, and that makes sense. In Jesus’ time and place, women had very little recourse after being divorced. They were essentially left high and dry if they were discarded by their husbands.

Examining this Jesus teaching today, even from a liberal and/or secular perspective, we can see Jesus’ strong respect and empathy for women. We can draw out an imperative to attend to the human consequences of the decisions we make when it comes to sex and marriage. Am I saying that no one should ever get divorced? No. Even the Pope has acknowledged that sometimes it’s morally necessary. But what I do get from Jesus on this score—what I think all of us can get—is the imperative for men to treat women as human beings, not as consumer products they can discard or trade in or upgrade whenever they’d like. And when you start to examine what’s broken with sex in our culture today, I think you’ll see that this imperative goes right to the heart of the problem and could go a long way toward improving things.

In essence, what’s gone wrong in our culture is that sexual dynamics have devolved such that they are often dehumanizing. What’s impressive to me is the way that Jesus, over and over again, is constantly rehumanizing situations involving gender relations and other kinds of relationships that have become dehumanizing. Jesus rehumanizes people who have been dehumanized. Look at Jesus in action in John 4 and John 8. Consider also Luke 7:36-50. We find here compelling examples of Jesus interacting in this “rehumanizing” way with women who are marginalized or under dire threat.

PLM: The problem of sexploitation has reached epidemic proportions. We have witnessed abuses in the religious, political, business and entertainment industries. Certainly, the crisis is not limited to these spheres. What do you think are some of the reasons this problem has continued to surface and become ubiquitous?

TK: As a society we have become obsessed with sex. And now an overdue reckoning is upon us and shining a harsh light on ways in which the sexual revolution has gone sideways. We have glorified sex too much. We have blown it out of proportion and given it too large a role in our narrative about what constitutes a full and enjoyable life. There’s a greedy fixation on sex among some people. It’s disturbing to see how this has played out among heterosexual men. Many have bought into the idea that that they should be getting lots of sex off lots of women, that this is something they’re entitled to, and they pay no attention to the human consequences of their conquests. They have lost sight of who women are and what they’re on this planet for. Women are human beings and deserve to be treated as human beings.

PLM: Would you agree with the following? The greater our fixation on body parts the smaller our appreciation for people’s character, personalities, and minds. How would you encourage people as a secular Jesus follower to view other people? And how does such small-mindedness not only affect others, but also ourselves?

TK: Men should relate to women primarily on the basis of their intelligence, abilities, character, companionship, and so on—not on their body parts. I’ve been accused of being a “soy boy” for popping off this way. That’s OK. I think progressives are on the right track with the generally accepted sexual ethic that says sex is OK as long as no one is getting hurt. The problem is that we have been too slow to see ways in which people are getting hurt in our more permissive sexual culture and too reluctant to call it out for fear of being a prude. This is changing now, I think you’ll agree with the #MeToo movement happening and powerful men being exposed and demoted for sexual predations, as they should be.

When you read the stories about Harvey Weinstein and others like him, you can’t help but see the damage he inflicted on the women he pursued and cornered. And that frames the question that more men should be asking themselves in their pursuit of sex. Namely, what effect is my behavior having on this human being whose body I am aggressively trying to access for my sexual gratification? What is her experience of this? What does she want and deserve? If more men could start thinking and behaving this way, it could change their behavior and make life a lot better for the women who have been finding themselves on the receiving end of sexual harassment and sexual abuse. And, I’m sure you’ll agree, the men would become better people in the process.

PLM: Personally, I do not believe that consent is sufficient to safeguard against objectifying others sexually. Long-term, committed mutually nurturing relationships as expressed in monogamous marital union helps guard against commodification of another human for mere sexual satisfaction. While not all marriages reflect this ideal, when embodied, this ideal does make a difference in safeguarding against sexploitation. How would you respond, and what would you wish to add in your call elsewhere for a sexual re-revolution?

TK: I agree with you about the value of nurturing relationships and the imperative not to commodify people for their value as sex providers. But I’d say consent is at least a good starting point. And if we go with a thick definition of “consent” we can develop a robust sexual ethic to reverse the excesses and abuse that are so rampant today. Here’s what I mean.

A sexually aggressive man with a thin definition of consent would be thinking … “Well, she’s not stopping me. She’s not saying no. What the hell. I’ll keep going.” With a thicker and more empathetic conception of consent, a man is asking himself more challenging questions like … “What effect is this going to have on her emotional and spiritual well-being? After I’ve had my fun with her, what next in terms of how we relate to each other? Will I simply be discarding her? How would I feel about all of this if I were in her shoes? Does she really want this, or is she just going along because I’ve pressured her and manipulated her?” This might cause, um, performance issues if the man starts to realize she’s uncomfortable. It should. But that’s the least of the man’s problem, it seems to me. What does this misuse of a women say about his character?

What we are talking about, once again, is the ethical imperative to value the other person. I can think of few if any figures from history who taught this and demonstrated this as well as Jesus.

March 12, 2018
What Kan’t God and Jesus Do in Kant’s Philosophy? What Wouldn’t Jesus Do?
Next Post

March 19, 2018 Hebrews—Jesus Is a Faithful High Priest, Unlike Vampires. Hold Fast in Faith.
Recent Comments
0 | Leave a Comment
Browse Our Archives
get the latest from
Uncommon God, Common Good
Sign up for our newsletter
POPULAR AT PATHEOS Evangelical
1