This is a contest inspired by a post by Bryan Caplan in which he came up with the idea of an Ideological Turing Test. The conventional Turing Test is a computing challenge — the goal is to build a computer that can carry on a conversation via text well enough that a panel of judges can’t tell the difference between the computer and a group of human ringers.

Caplan challenged partisans to see if they could explain and the positions of their opponents well enough to pass as one of their ideological enemies. He offered his original challenge to Paul Krugman for an economics-off, but I’ve borrowed the idea and put a religious spin on it. Here, Christians will sham amidst a group on genuine atheists and vice versa. The plausibility of their conterfeits will be determined by open voting. The first Ideological Turing Test: Religion Edition took place in July 2011, the second in June 2012, and it will probably be repeated in the future. SIGN UP HERE.

You can find all relevant posts under the category “ideological turing test,” but the links below should help you navigate the competition.

List of Contest Questions – Four questions to answer in the guise of atheists, four to answer as Christians

Answers to Atheist Prompts – This link will let you peruse all the answers to the questions for atheists. See if you can pick out which are sincere and which were written by Christians!

Judging the Atheist Responses – Voting is now closed. Read through the answers and rate whether you think the author is sincere or shamming.

Judging the Christian Responses – Voting is now OPEN. Read through the answers and rate whether you think the author is sincere or shamming.

Winners in the Atheist Round – Which Christians managed to talk the talk and which got caught?

Christian Round Entries – The roles are switched: Christians are sincere, atheists are shamming

Atheist Round Winners – Which Christians convinced the atheist voters they were for real?

Christian Round Winners – And vice versa

MORE ANALYSIS! – The tag linked there will take you to better charts, contestants explaining their strategies (successful or not) and yet more to come.

Oh, and bonus points to anyone who manages to convert or deconvert a reader while arguing the side you don’t believe. 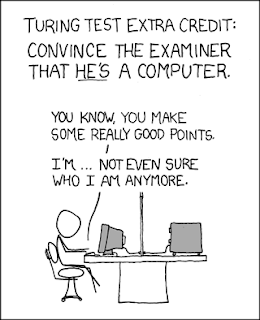