Wise words from David Tracy’s Plurality and Ambiguity, regarding the situation of plurality and the challenge of interpreting religion–and the role of theologians in doing that interpretation. He argues that both conservatives and liberals, “traditionalists” and progressives, believers and unbelievers (in other words, all human beings) are prone to the temptation to reduce religion to one or another “thing” that we presume to be manageable and unambiguous.

All methods of reductionism, whether by believers or nonbelievers, are grounded in an 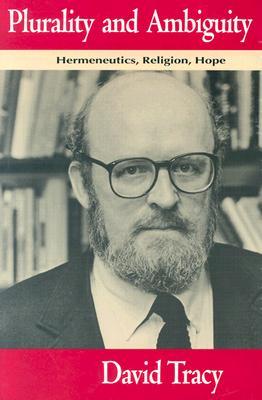 unacknowledged confession of their own: the belief that so secure is their present knowledge of truth and possibility that the religious classics can at best be peculiar expressions of more of the same. Anything different, other, alien must clearly be untrue and impossible–that ‘goes without saying.’ (100).

These conflicting reductionist procedures are temptations that in a hundred forms beset every interpreter of religion. Hiding within all of them are some secret presuppositions. In some methods and hermeneutics of suspicion there lives the belief that we moderns and postmoderns, as the vanguard of social evoluition, have finally discovered that one argument, the one method, the one critical theory that explains all–and explains it usually as more of what we already knew. Impelling all purely traditionalist notions of theology is the shadow side of the same secret belief. We true believers, and we alone, have not ceded to the demands of cultural change. We alone have remained pure and innocent, treading modernity with the contempt it deserves. We are the tradition, and the tradition is pure (101)

So the problem with the reductionist impulse, when interpreting religion, Tracy argues, is that religion is by nature ambiguous. To treat religion as unambiguous (clear, distinct, “objective,” etc.) is to assume mastery and control over it. Instead, we should let religion be what it is and understand ourselves with the requisite humility in the face of its complexity and ambiguity. Furthermore, he says,

But besides these more strictly intellectual difficulties, there is another problem: patrons of certainty and control in their interpretation of religion are boring. And whatever else religion is, it is not boring. It is other, different, disturbing. It is not more of the same (101).

Stay in the loop! Like/follow Unsystematic Theology on Facebook for more posts and discussion on theology and society.

July 16, 2015 The Trouble with Women in the Church (Leaving Evangelicalism #6)
Recent Comments
0 | Leave a Comment
"In His first day of resurrection, He told a couple that books of Moses and ..."
Herrnhut The Fundamentalist Heresy: Jesus was a ..."
""Missional" is not a hermeneutic but a lens through which theology is seen. If it ..."
Alonzo Here’s a Good Explanation of “Missional ..."
"What a surprise it'll be when those Harlot of Babylon, fake 'christians' realize that:Jesus is ..."
Ocelot Aardvark A Scholar on Why Evangelicals Love ..."
"I, as a (genuine) Christian, have fought tooth and nail against TЯ卐m₽-the-Beast since the very ..."
Ocelot Aardvark A Scholar on Why Evangelicals Love ..."
Browse Our Archives
get the latest from
Unsystematic Theology
Sign up for our newsletter
POPULAR AT PATHEOS Progressive Christian
1

How a Plague Exposed the "Christian...
Honest to God
Books by This Author Books by Kyle Roberts

An Unjust Judge (Part 1 of 3)
This widow was pleading for equity, what today could be called social...
view all Progressive Christian blogs
What Are Your Thoughts?leave a comment
Copyright 2008-2020, Patheos. All rights reserved.