Evangelicals, Trump, and the “Politics of Apocalypse”

What’s up with those evangelicals? Is it the end of the world?

Matthew Sutton’s book American Apocalypse: A History of Modern Evangelicalism, is a fascinating, meticulously researched and well-written study of the complicated relationship between fundamentalism, evangelicalism, and the interplay of these movements within modern culture.

Sutton argues that the distinguishing feature of modern fundamentalism and its morphing into evangelicalism, that which 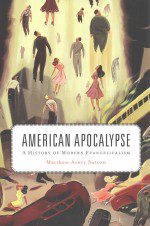 differentiates those conservative streams of Christianity from the rest of the modern world, is an ardent apocalypticism; a drama-filled eschatological outlook with distinct historical stages that culminates in a destructive cleansing of the world and a general resurrection with a final, double-judgment (heaven/hell).

Contrary to popular perception, however, theirs was not an “escapist” theology that led to passivity or a relaxed attitude about culture.

Yes, they mostly held to a premillennial (and often pre-tribulational) eschatology–the belief that Jesus is coming back any day to rapture believers and pour out God’s wrath on the rest of the world, after which he will establish a “millennium” of God’s reign on the earth before the final judgment.

However, the dramatic nature of their apocalypticism actually stirred them up to fervent, passionate action. Not, it should be said, to environmental activism, for example; but to action nonetheless.

They were stirred up to kind of action they deemed consistent with their belief that God was going to violently and radically transform the world, save some souls and damn many others, and eventually usher in a lengthy period of peace.

Fundamentalists constantly asserted that Christ had called them to ‘occupy’ the earth until he returns by exercising influence in all areas of life. An occupy they have. Fundamentalists’ apocalyptic sensibilities instilled in them a sense of determination that demanded constant action. They believed that they had to wield their influence and power as effectively as possible to prepare the world for the end of days. Jesus was coming soon to separate the sheep from the goats, and they wanted to be ready. They also recognized that obedience had its benefits. No matter how dire the circumstances, no matter what challenges they faced, they were certain that they would ultimately prevail….While they might lose a battle here or there, they were going to gain the world.

This activism, this sometimes frenetic attempt to “wield their influence and power” fed eventually into the Religious Right and the political involvement in general of the fundamentalist movement. He goes on to say that,

Fundamentalists’ efforts to “occupy” until Jesus’ return took overt social and political forms. The faithful expected the Antichrist to come in the guise of a political leader and they believed that the world would reach its climax in a violent, global war. The political implications of such ideas were unmistakable. Fundamentalist apocalypticsism created a very particular ideology and a very particular form of cultural engagement. It fostered in believers a sense of urgency and certainty and a vision of the world defined in absolute terms. While liberal expressions of Protestant Christianity encouraged patience, humility, willingness to compromise, and tolerance on a wide range of important issues (at least in terms of ideals if not always practices), fundamentalists believed that they were engaged in a zero-sum game of good versus evil. They had no time or regard for incremental change, or for reasoning with those who differed with them, or for mediation, or for gradual reform. They called for drastic and immediate solutions to the problems they saw around them. With time running out, they hoped to shake the world…

Theirs was a politics of apocalypse.”

Fast-forward to today: Many have suggested reasons why (white, conservative) evangelicals continue to support Trump. Aside from the basic fact that such evangelicals tend to vote Republican by party affiliation, they see in Trump someone who will take up their causes, advocate on behalf of their religious liberty, and nominate conservative Supreme Court justices.

But I wonder whether there’s a deeper analysis that emerges from Sutton’s definition of evangelicalism as driven by apocalyptic eschatology. Perhaps many evangelicals are willing to overlook all the ways that Trump is not like them because, at the very least, he represents the kind of apocalyptic drama that has shaped their identity, in both theology and politics.

On the other hand, Hillary Clinton, for them, is just more Obama:  Too chill to be the actual Antichrist. Rather than embodying “urgency,” “certainty,” and a “vision of the world defined in absolute terms,” Clinton is status quo liberalism: “compromise,” “tolerance,” “mediation.”

Granted, there are numerous reasons for the continued evangelical support of Trump, but I wonder whether the apocalyptic impulse always bubbling just beneath the evangelical movement isn’t what drives at least much of the outright support of Trump, despite their stated reservations about him.

After all, if God’s going to blow up everything anyway (eventually), what do they have to lose? Why not start now?