Captain, We’re Out of Beer!

When those adventurers we now call the Pilgrims realized they weren’t going to make it to Virginia on their beer supply, they did what most idealists do, they jumped ship. But first they wrote up a little agreement for themselves that nowadays we call the Mayflower Covenant. This was 1620.

Having undertaken, for the Glory of God, and advancements of the Christian faith and honor of our King and Country, a voyage to plant the first colony in the Northern parts of Virginia, do by these presents, solemnly and mutually, in the presence of God, and one another, covenant and combine ourselves together into a civil body politic; for our better ordering, and preservation and furtherance of the ends aforesaid; and by virtue hereof to enact, constitute, and frame, such just and equal laws, ordinances, acts, constitutions, and offices, from time to time, as shall be thought most meet and convenient for the general good of the colony; unto which we promise all due submission and obedience.

No, they weren’t going to make it to Virginia. They’d have to make do with Cape Cod. They were quick to point out they had the same goals, however. And so they decided to

“covenant and combine ourselves together into a civil body politic.”

Some Bodies Politic Have More Bodies Than Others

Just as it takes an economist to have a really bad economic idea, a political idea that has it exactly backwards generally originates with a philosopher. In the case of the “social contract,” that philosopher was Thomas Hobbes, father of the American political process.

For example, when things got tough, it appears the civil body decided it was politic to kill and eat a couple of the females. Furthermore, the covenant did not include, oh, say, the people whose livelihoods they were taking away.

Hobbes had been trying to justify the ways of . . . monarchy . . . to man. It is no doubt that a social contract is a great boon to monarchy. Social contracts don’t work so well for . . . well, almost everybody else.

Now we know that Hobbes had it backwards—human beings are tribal animals. We can’t survive by running about like free radicals. 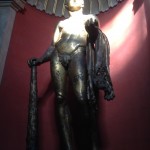 We “covenant” as a matter of course. It’s part of our evolution. What we DON’T do “naturally” is include everyone—those who are not loud and empowered, or even capable of covenanting, for that matter.

This 523rd year of the Christian European occupation of the Western Hemisphere might be a good time to think about our origins . . . and our excuses . . .

January 13, 2015 As the movement builds, let us remember
Recent Comments
0 | Leave a Comment
Browse Our Archives
get the latest from
New Visions
Sign up for our newsletter
POPULAR AT PATHEOS New Visions
1