(Or: A Little Demonstration of What Religious Freedom Looks Like)

Cilantro. It’s a polarizing vegetable. Many love it. Many hate it. For some, it is just the fresh touch needed to make Mexican and Thai cuisine perfect. For others, cilantro tastes like Ivory Soap.

An unbridgeable chasm, it would appear.

Three genes have been identified as having to do with cilantro perception. It’s nature—three whole genes. A little investigation, however, offers hope. Though the hatred of cilantro is due to our genes, nurture may come to the rescue.

It is possible—at least for some people—to reverse cilantro aversion by making and consuming it in a pesto. (Chopping changes the chemical makeup.)

In this, cilantro is much like God, isn’t it? Each of us believes or doesn’t. We know some of our beliefs are due to nurture. How many are due to nature?

Take as an example something you’ve probably noticed: “a-ha!” moments of conversion from one side to the other—theist to a-theist—don’t appear to happen all that often. Some are born loving cilantro. Some are born hating it. Few bother to make pesto and change cilantro categories.

Again, how much of theism is nature?

HOW MANY DRANK THE KOOL-AID?

Studies show that the number of people claiming to believe in divinity is dropping steadily. But how much of that drop is due to “a-ha” conversions and how much is due to the mainstreaming of atheism as atheists and agnostics come out of the closet?

For example, sadly, we will never know how many people did and did not believe in god in the grand old days of Christendom in Europe. The choice was . . . be Christian or be dead.

We do know that most of the European population had no choice about converting to Christianity. The local dukes, earls, and other strong-persons said . . . be Christian or be dead. Some chose death. Most, I suspect, chose silence.

There is one glaring counter-example. The savagery of the Vikings was long “proven” by using the example of their attack on the English monastery of Lindisfarne. Killing unarmed monks is, without question, a savage thing to do.

Now we know, however, that the attackers were retaliating against Christians because of the brutal policies of the emperor Charlemagne, who pronounced a death sentence on any “pagan” unwilling to convert. The Vikings at Lindisfarne had lost loved ones to those monks they chose to kill. 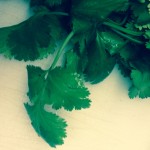 God is also like cilantro in the nature of arguments for and against god: there’s no logical argument for the concept of god.

You see the problem.

The concept of free will is not like cilantro.

Another example: it appears that humanity will never learn to time travel. It appears that’s the case because . . . no one is showing up from the future. Sure, there are dodges—that we will in the future also learn to be invisible, for example; or learn how to be in another dimension and therefore undetectable. Still, barring some major changes in how people do things, it appears time travel will never become possible.

Whether or not time travel will occur is not like cilantro.

But belief in a god or gods: It’s a feeling, a taste.

So . . . perhaps, like cilantro, the choice to believe or not is best left up to the individual. For some, it’s yummy. For some, soapy: Nature, nurture.

But fussing over it? Fuhgettaboudit.

(Note: I’ve just said something that would get me arrested and/or killed in most times and places. Thanks, Constitution. No thanks, RFRA.)

April 9, 2015 Reason is Dead; Long Live . . . Advanced Hindsight
Recent Comments
0 | Leave a Comment
""
nemery11 #Charlottesville and Getting Real
"Dear Author,As I read your words I am both "boosted", yet simultaneously frustrated for the ..."
Scot Reichman The Spiritual Practice of Agnosticism
"In other words it should be'celebrated' in the way we 'celevrate" Remembrance Day (11th hour ..."
Ivlia Blackburn The Meaning of Memorial Day
"Talk about that moral arc of the universe that bends toward justice is metaphysical talk—theology—not ..."
NoDifference #Charlottesville and Getting Real
Browse Our Archives
Related posts from UU Collective