“BE IT FURTHER RESOLVED that the 2015 General Assembly recognizes that the fight for civil rights and equality is as real today as it was decades ago and urges member congregations to take initiative in collaboration with local and national organizations fighting for racial justice against the harsh racist practices to which many black people are exposed.

No matter who you are, black lives matter, and a system of fair, transformative, and restorative justice that is accountable to communities is something to which each of us has a right. Unitarian Universalists and our greater society have the power to make this happen. Let’s do it!” – Support the Black Lives Matter Movement: 2015 Action of Immediate Witness

Beloveds, we have been called – called up and called in and called forth by the youth of our faith, by the spirit of life and love, by the grace of creation – called to bear witness to the divine spark shining in each of us and all of us. Wherever that spark is being denied the right to shine fully, especially when it is being maimed or suppressed by systems of oppression – white supremacy, patriarchy, heterosexism, the gender binary…Together we are called to activate our hearts to care for each other and ourselves enough to insist on an ethic of love as a guiding principal in our lives. Together we are called to be the welcome table.

The United States of America has struggled with setting a welcome table since it was first colonized. This nation, built on stolen land from stolen bodies, is saturated with a narrative of dominance. This country has a Lady Liberty-sized mythology of inclusion and a powerful and brutal history of exclusion.

State sanctioned violence is going on right now at a higher rate than any in recent memory, with most people reaching back into the 1960s for examples of the last time white supremacist state violence was so explicit. Sandra Bland was pulled over for failing to properly signal a lane change? Now she’s dead? No my friends, we are called to expose the myths of inclusion, the deadly lies that limit or destroy the brilliant spark of the divine shining in each of us.

We are called here now, called to bear religious witness to the beauty and the pain of each other, of our communities, of this planet earth. Beloveds, we are the welcome table. Let us think and act accordingly. Together we are called to activate our hearts to care for each other and ourselves enough to insist on an ethic of love as a guiding principal in our lives and our world.  #BlackLivesMatter

[With gratitude to the Unitarian Universalist Youth Caucus, Kimberly Johnson, bell hooks, Wendi O’Neal, Ruth Idakula, Lucy Tucker, and the People’s Institute for Survival and Beyond for informing the creation of this post!!!! -Rev. Deanna] 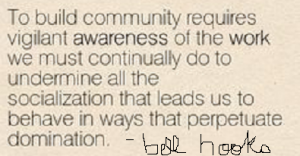 July 28, 2015 Punishment
Recent Comments
0 | Leave a Comment
Browse Our Archives
get the latest from
New Visions
Sign up for our newsletter
POPULAR AT PATHEOS New Visions
1