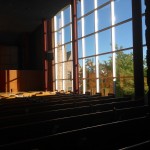 I meet monthly with clergy colleagues, Jewish, Muslim, and Christian of various stripes, all of whom are leaders of urban, liberal congregations. We clergy—and most of our members—do not see our own way as the only way. We believe that dialogue is the antidote to violence. None of us are fundamentalists.

That said, none of us is thinking of converting to another religious tradition. We are open-minded but not open to conversion.

We meet to talk. The fact that we can have an amicable breakfast indicates that we have many things in common. Is there a common core to religious traditions? If so, what is it?

Perhaps the best angle to approach the question is with another question: What is the opposite of religious?

For too long, the answer has been “secular.” But I’m not sure what that means either, except, perhaps, that some attend religious institutions and some do not. Those who gather in congregations are religious, those who don’t are secular.

But is that true? I’m a Humanist, the tradition in which the term “secular” is used to distinguish some Humanists from the “religious” ones. Yet the two groups have common values.

Further, the murkiness of what “religious” means has led to the “spiritual but not religious” fad that appears to be permanently rearranging the religious landscape. Is someone who worships Vishnu faithfully but has never been to nor will ever attend a service to Vishnu . . . religious or secular? Is it gathering into a congregation that makes some religious and others not?

Does “religious” mean part of a tradition? If that’s true, how old does a tradition need to be in order to qualify as religious? Does Scientology qualify?

And what about those stats that say forty-eight percent of the younger generation are “dones” or “nones.” Just what is it that this group wants none of? What are they done with?

Are they done with religion? Or only the institutions of religion? Was the comedian Lenny Bruce correct when he said, “Every day people are straying away from the church and going back to God.” Had Lenny Bruce been reading Ralph Waldo Emerson?

Yes, my clergy colleagues of whatever stripe have some things in common—we all have buildings that need constant repair; we all feel pulled in too many directions;we all cringe at the news of what someone in our tradition has done. These are the superficial topics of conversation.

But we have deeper connections. We all strive to fulfill the sentiment of an old hymn: “Earth shall be made fair and all her people one.” That’s why we keep talking. We all feel called to maintain, strengthen, and pass on the tradition that each of us has found so meaningful, but we also believe in a higher purpose, one of peace and justice.

September 30, 2015 Redemption
Recent Comments
0 | Leave a Comment
"Dear Author,As I read your words I am both "boosted", yet simultaneously frustrated for the ..."
Scot Reichman The Spiritual Practice of Agnosticism
"In other words it should be'celebrated' in the way we 'celevrate" Remembrance Day (11th hour ..."
Ivlia Blackburn The Meaning of Memorial Day
"Talk about that moral arc of the universe that bends toward justice is metaphysical talk—theology—not ..."
NoDifference #Charlottesville and Getting Real
"My tradition is Advaita Vedanta. Yoga is actually union with God. Advaita recognizes no duality ..."
Arthur Shimkus To Whom It May Concern: the ..."
Browse Our Archives
get the latest from
New Visions
Sign up for our newsletter
POPULAR AT PATHEOS New Visions
1