Cutting Some Slack for Integrity

I defy the Pope and all his laws. If God spare my life, ere many years I will cause se a boy that drives the plow to know more scripture than he (the Pope) does.

God—or at least the authorities in Brussels—did not spare Tyndale and he was strangled then burned at the stake.

One of his crimes was to translate the Greek word “ekklesia” not as “church,” as the Roman Catholic hierarchy would have it, but as “congregation.” A heresy not unknown to many people to this day.

Though other translations of the bible into English were published soon after his strangulation, Tyndale’s translation so appealed to English speakers that he is responsible for 84% of the King James Version of the New Testament and 75% of the Old. (How many English-speaking plowmen eventually became better bible scholars than the popes is unknown.)

It’s not as if Tyndale did not have ample warning, but he felt compelled to not only speak his truth, but to speak it loudly and forcefully. He said,

It is impossible to preach Christ, except that thou preach against antichrist.

Yes, nowadays Tyndale would not be strangled and burned, but he would be called intolerant.

Why do people do it?

When I listen to people who have become Unitarian Universalists or Humanists, who have come out of other systems of meaning-making, what I hear about is a search for integrity—for a match between mental beliefs and physical action.

For example, an older gentleman came to my office one day. He’d been born a Lutheran and had been a Lutheran all his life. His son had recently committed suicide. At his son’s funeral, when he heard the platitudes about how it was the will of god, and that god had a plan, and on and on, he realized that he simply didn’t believe any of it.

So, he joined a UU congregation. His wife of fifty-some years continued going to their Lutheran church. But he wanted to make it clear that he didn’t believe any of that any more, and he wanted me to know in no uncertain terms that when he died, he did not want those words he no longer believed in said over him. And, he even brought his wife in to witness his funeral plans, in the hope that she would respect his wishes. This man did not want to be called a Christian after his death.

I often hear stories of this sort from Unitarian Universalists and Humanists—they began to doubt. They listened to their doubt. Consequently they came to a place where doubt is respected and searching for your own truth and meaning is respected . . . and practiced.

Often these searchers are guilty—like Tyndale—of preaching antichrist a bit too often and too loudly. Guilty of “defying the Pope and all his laws” a bit too aggressively. Many are intolerant. But they have won their integrity. 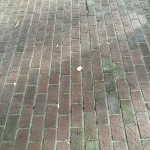 March 31, 2016 What's the Beef with Purple Cows? On Logos and Mythos
Recent Comments
0 | Leave a Comment
Browse Our Archives
get the latest from
New Visions
Sign up for our newsletter
POPULAR AT PATHEOS New Visions
1

Why "All Lives Matter" Isn't About...
Companions on the Journey
Related posts from UU Collective